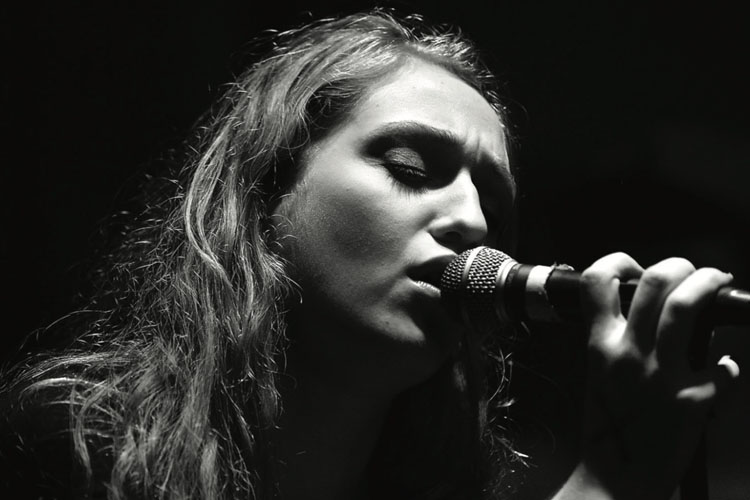 //PICTURED ABOVE: Gripping the mic in concentration, Quinn Brodsky ‘18 moves the audience with her talented voice. This picture is from her 2015 performance with her band, The Hey Heys, at music venue and bar in Dallas, Trees. Brodsky is now the first female student to be a part of the “Logs,” a previously all-male a cappella group at the Massachusetts Institute of Technology.

Although the Massachusetts Institute of Technology (MIT) is notorious for being the dream school for aspiring engineers and mathematicians, it actually hosts one of the most well-known college a cappella groups: the MIT Logarhythms.

According to their YouTube page, the “Logs” were formed in 1949, which means that they have been around for almost 70 years. Quoted on their YouTube page as “MIT’s premier all-male a cappella group,” it seems like there is one piece of information that needs to be changed. In the fall of 2018, alumna Quinn Brodsky ‘18 was the first girl to be admitted into the group in its history.

Quinn Brodsky, a long-time singer and music enthusiast, has been singing since she was around 7 or 8 years old when she began voice lessons. Since she was 12 years old, Quinn Brodsky has been in numerous bands, performed at Hockaday and St. Mark’s School of Texas coffeehouses and written her own music.

Quinn Brodsky had never performed in an a cappella group before. But when she saw the Logs at MIT’s preview weekend, she knew she had to audition.

“Out of all of MIT’s groups, they’re one of the more prominent ones,” Quinn Brodsky said. “There was a big a cappella performance, and the Logs performed [at preview weekend]. That was when I really started to be interested in them.”

Though the group technically began allowing girls to audition a few years ago, none had made it into the group yet. With this daunting prospect in mind, Quinn Brodsky set out to audition for the Logs in early September.

“The only barrier is this weird social norm, so, why not try?” Quinn Brodsky questioned. “The worst they can say is no.”

Auditions for the Logs lasted two days, from Sep. 1 to 2. Quinn Brodsky, who had been updating her parents via text throughout the entire audition process, was notified whether or not she had made the group on the night of Sep. 2.

“My parents are really supportive of me,” Quinn Brodsky said. “My mom told me that throughout the entire day she was super nervous, and then when I told her [that I got in], she was with her friends, and she started crying.”

Greta Brodsky, Quinn Brodsky’s mom, has always been a big supporter of Quinn Brodsky and her musical endeavors.

“I first realized that Quinn had a beautiful voice at the age of three, when she sang ‘happy birthday to you,’ and had an amazing voice,” Greta Brodsky said. “She’s always just had a natural talent for singing.”

According to Greta Brodsky, her daughter has always been self-driven. She taught herself guitar and has been in several bands, but decided to do those things on her own.

“I said, ‘Quinn, if you want me to be that mother that will push you, I will do that,’” Greta Brodsky said. “She said, ‘Mom, the likeliness of me being a famous musician is just so low. I think I’m just going to be a physicist.’”

Though Greta Brodsky was excited to spread the good news, her daughter was hesitant.

“She didn’t want to take away from the other members in her class that she was a woman,” Greta Brodsky said. “She’s just very humble about that.”

Justus Winkler, Quinn Brodsky’s former bandmate and friend of five years, was not surprised that she had made the group.

“She’s always been very talented and very confident,” Winkler said. “I think her voice will do well in a choral setting.”

Though some may believe that the integration into a previously all-male a cappella group would be tough, Quinn Brodsky doesn’t think that it has been difficult at all.

“I’ve never felt, in any way, othered from the rest of the group,” Quinn Brodsky said. “They’ve all been very supportive of me. It’s basically just like I have a bunch of brothers, which feels very great.”

Apparently, students at MIT are not bothered by her acceptance into the Logs either. The MIT student newspaper, The Tech, even covered her story.

“Sometimes I’ll be walking around campus wearing a t-shirt with the Logs’ logo and hear people whisper, ‘That’s the girl Log,’” Brodsky said. “But I know that the intention is probably like, ‘This must be a really important thing,’ not necessarily about my gender but the significance for the group.”

However, Quinn Brodsky believes that it may be strange for some of the alumni, especially since it is the 70th anniversary of the Logs in 2019.

“There’s some concern that, potentially, older alums, the traditional alumni, may not be super thrilled that I’m there, but I’ve gotten emails from alumni and met many of them,” Quinn Brodsky said. “From the ones that I’ve met, they’ve all been very excited. There’s been no negative feedback from the alumni so far.”

So far, the group has completed their fall tour, where they performed at schools and colleges in New York and Rhode Island. The group has a rigorous practice schedule, with three two-hour rehearsals scheduled for every week and extra practice for the freshmen.

“Usually, on a given week, I’ll practice four to five times a week, so a total of seven to eight hours a week,” Quinn Brodsky said.

Despite the time-consuming practice schedule, Quinn Brodsky believes she will “absolutely” continue performing with the Logs for the entirety of her college career. However, she doesn’t think she will continue playing in bands as she did in high school.

“I probably won’t be in a formal group, because [the Logs] is already a big time commitment,” Quinn Brodsky said. “I already play music with my friends in my dorm—it’s casual.”

Quinn Brodsky hopes that her acceptance into the Logs kickstarts conversations about societal norms and the future inclusion of people of all genders.

“I think that this could be an opportunity for some really big change,” Quinn Brodsky said. “Both for the culture of the group and for the acceptance of other genders into groups.”