The Race for Change 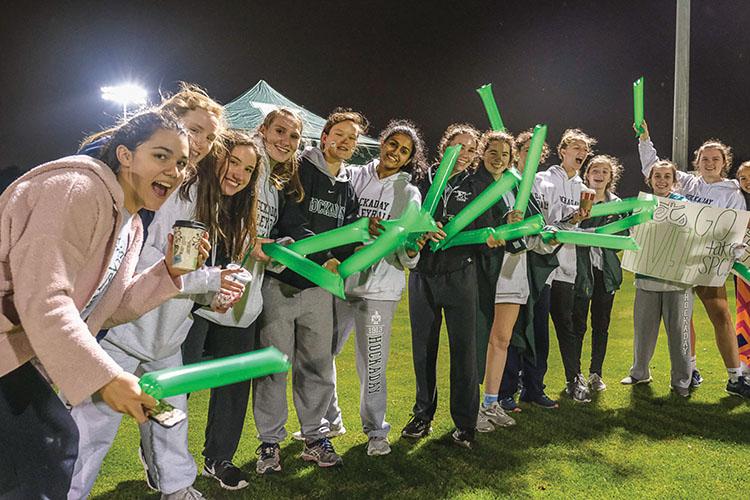 //PICTURED ABOVE: Armed with energy and school spirit, the Hockaday Varsity Volleyball team bundled up to cheer on the Varsity Field Hockey team during their first SPC matchup against Houston Christian High School. This year, the athletics department and Upper School athletic board created a seasonal raffle for students and teachers to promote better attendance at important sports events.

Imagine what can happen in seven days. It only takes seven seconds to make a first impression, 17 hours to put together a car and 24 hours to thaw a turkey. In the Hockaday Athletics department, no one is thawing turkeys, but within seven days, Deb Surgi, Director of Athletics, would bring together all the students and make a community.

A cultural change has taken full swing in the Hockaday athletics program. Under the careful assistance from Surgi, who began her position earlier this year as the new Director of Athletics, immense development has taken place.
Some of the questions Surgi asks herself everyday are, “What’s the next step, what sports should we be offering that we don’t already have and what are the facilities needed in order to do that, to accomplish the big picture ideas that we want to meet?”

The time of the “forgotten cornerstone,” Hockaday athletics, has finally come to an end.

One of the biggest changes this year has been spreading unity and equity throughout all sports. The athletic department wants to integrate Middle and Upper School sports together to create more fluidity within the departments.

In order to to achieve this, Surgi plans to have varsity athletes working closely with Middle School and hosting special events for the younger girls to create a sense of identity for each department.

Jones and Surgi have also been working to make every sport feel welcome and appreciated in the department.

“It’s one Hockaday athletic program, all of the teams combine to make Hockaday athletics, but before there were definitely some sports that got forgot about or not a lot of emphasis was put on them. People have felt forgotten about in the past and we are trying to fix that issue now,” Jones said.

All these changes have already positively affected student athletes trying to excel at their sports. Kate Wills, varsity diver, has seen improvements in the diving department already.

“Coach Surgi is putting more focus on all the teams that most people forget about, like diving. We now feel like a real team and are being supported by the athletic department,” Wills said.

The most important part about spreading unity is creating a culture that will spread through the whole school, not just Upper School, as well as fostering a feeling of pride in being part of a sport.

“At the same time we want to create a culture where we don’t want JV or Middle School to feel lesser than, we want them to look at a varsity player and feel like, ‘She represents the varsity program, and I’m part of that program,’” Surgi said.

Also, at the Southern Preparatory Conference pep rally, only the varsity athletes walked out in order to encourage the JV athletes and all athletes to work hard to reach this point in their career.

Captains and the HAW

Another way that unity has become a part of athletics is through the new procedures captains follow.

In previous years, all the teams elected their captains at the start of each season with varying numbers of captains and different ways of voting for captains for each team. This lacked the sense of unity that Surgi and the athletic department wanted to create.

Starting this year, each varsity team will pick two captains from anyone on the varsity team who wishes to run and makes a speech. These captains are designed to represent their team with sportsmanship and character.

Each team member fills out a ballot with space that allows them to address why this person  best embodies the spirit of the whole team. After the seasons of each sport is over, each team will vote again for captains for the next seasons.

“It’s all about the newly adopted language around what does it means to be a Hockaday captain, creating the passing of the torch, creating opportunities for legacy and the passing of leadership, for storytelling from one student to another and grade to another, one division to another,” Surgi said.

At least once per season, all the captains will meet with Surgi for lunch to discuss what they want from the season and what they feel their team needs.

The newly elected captains for next year will have a captains training seminar and lunch in order for them to go out into the battlefield with skills and some direction for what they are trying to accomplish. The captains will then have the summer to plan out their season and make sure what they want to achieve becomes a formulated plan of what they can do to achieve it.

Neelam Jivani, an athletic trainer, witnesses all the changes in the athletic department as she watches most games and takes care of the athletes.

“I think for the players, the most important thing would be the voting of the captains and how it’s more student chosen and each player has the ability to choose who they wish,” Jivani said.

The Athletic Board has also started the “Hockaday Student Athlete of the Week” (HAW).

The HAW was created to recognize the student athletes that go above and beyond in their respective sports. They are leaders and have impeccable work ethic. When they play their sport, they command respect and lift their team along with them.

“The athletes don’t get recognized enough for their hard work. For example, at the end of the year, all the people who get athletic awards only get presented in front of all the athletes at the athletic banquet,” Jones said. “Generally speaking, I don’t think athletes get recognized as much, so putting emphasis on the varsity athletes will hopefully reveal all the hard work and dedication they are putting in.”

The HAWs get presented at lunch with their coach and Surgi. At the end of the season, they also are mentioned in front of the whole school at the SPC pep rally. Most importantly they get featured on the Hockaday athletics Instagram. And who doesn’t love getting featured on the Instagram!

“I think it’s good to have gear, because it shows our spirit to other schools, and it’s nice to have good gear to support our teams,” Jones said.

The varsity sports will be able to create subsections of the website with their varsity gear along with the school wide gear.

Now on the website, students and parents will find pictures of all the athletes and a schedule that can be synced easily to their phones.

Also, the past athletes that committed to colleges from Hockaday are shown on the website.

The new merchandise store and website are important ways to integrate the Hockaday athletics community and the whole school together and enhance the support of the Department.

Change of any kind is difficult and takes a lot of hard work and dedication, something that Jones and Surgi put in everyday.

“The biggest challenge in all of this is that the culture of athletics has become the forgotten cornerstone, in my opinion, for a really long time and to change it for the people who are already here, like the people in high school, it’s hard. So, changing the culture takes a lot of time,” Jones said.

Jones plans to focus on the younger athletes to foster a sense of athletic spirit in them that will eventually spread into all levels of the school as they grow older.

Now, all that the athletic department can focus on is the future and building the community and culture that they need. Unfortunately, it will take more than seven days, but all it takes is seven days to develop an idea that will change a whole department.