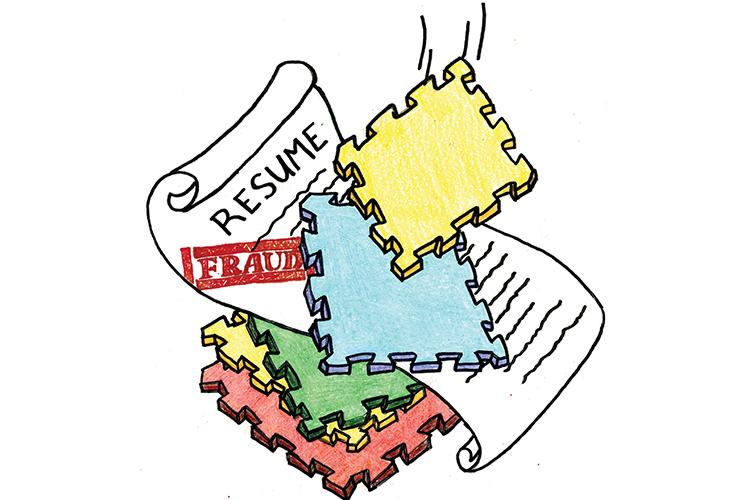 //PICTURED ABOVE: Efforts on resume padding do not usually lead to good outcomes, as falsifying information can cost one a college acceptance, job or even future.

As seniors and juniors start worrying about their futures with college looming on the horizon, many, including myself, wonder, “Am I doing as many extracurriculars as possible? Will my grades be too low for their standards? Will I be appealing enough to be accepted into my dream college?

One of the key elements in college applications is the resume—it’s one of the ways for colleges to look at candidates’ previous achievements in their own words. But because it’s challenging to verify every applicants’ past lives, colleges must rely on the candidates’ good faith and honesty. Unfortunately, some take advantage of this and lie or exaggerate on their resume.

Resume padding occurs frequently, from college to job applications. HireRight, an employment scanning service, reported that out of 1,813 organizations, 69 percent caught some type of “embellishment” in their applicants’ resume.

The data indicates that it’s common for people to pad their resumes. Many often exaggerate on their experiences, adding more detail or overly-describing past experiences to bolster its true nature. Some might add in a qualification for the resume to be more relevant to the respondent.

Our society stresses the importance of getting accepted into the best colleges and attaining the highest-paying jobs to such an extent that people choose to be dishonest in describing themselves. But is it truly worth it?

In 2012, Yahoo’s ex-CEO Scott Thompson was accused of lying about his education. On his resume, Thompson said he had a Bachelor’s degree in both accounting and computer science; however, an anonymous letter claimed that he only had a degree on accounting. This was later confirmed as true, and Thompson was replaced five months after he was hired.

Thompson’s lie brought great repercussions upon himself. He was publicly humiliated and called a liar. One untrue word on his resume ruined his reputation. And although he is a CEO of another company now, the top three results on a Google search-excluding his Wikipedia page-are associated with his “career lies.”

Situations like Thompson’s could happen on a small or large scale. Colleges may return acceptances and jobs may fire you, leaving your record soiled forever. Fabricating your information may cost you a college acceptance, job or even a future.

“Embellishing” a resume in worries of not being a competitive candidate already doubts their qualifications; if one feels the need to lie on their application for an acceptance, then they are admitting that they are not qualified at all. They are simply proving their incompetence by deceiving themselves and the respondents.

Also, when one is rewarded based off a fabricated resume, it simultaneously deprives many others of a spot they deserved. The underqualified people not only damage the learning environment or workplace by being inadequate for the job but also take away the future of the more qualified candidates.

Further, in times of crisis, they may fail to properly address an issue, leading the company or organization to its downfall. The rejected but qualified candidate may have led that company to success, being a positive influence. Simply by just padding one’s resume, individuals not only impact them- selves but also put other applicants and the respondents at risk.

Although colleges and jobs can conduct background searches to confirm applicants’ past achievements, it generally takes much time and effort. Instead, each candidate is entrusted with providing truthful information. Given the opportunity, why not show your true self? While you may not be the strongest candidate, your strong integrity takes the forefront and therefore must be valued. When you embellish a resume, the resume loses its genuinity.

Resume-padding reproaches one’s self-worth for their weak morality. Job or a college entrance is not worth degrading ethics; the importance of being a righteous human being outweighs that of college and jobs combined, no matter how prestigious or profiting. By being honest, one not only becomes a better candidate but also leaves some room for improvement to be a better person, even after failure.

Within the Hockaday community, clubs are notorious for being one of the many ways that people pad their resumes. Some might start a club that doesn’t hold a single meeting all year. During my freshman and sophomore year, more than half of the clubs I signed up barely held meetings. Even worse, once, my friend and I were the only ones, including club officers, to show up to a club meeting. I could hardly remember the clubs I didn’t participate in, and overall it did not affect me at all. And although the Upper School is now taking strides to eliminate clubs that do not hold meetings, such cases still occasionally occur.

Clubs are meant to unite people with a common interest and provide a space for people to share their stories or engage in projects they are passionate about. However, because starting a club is relaxed and regulating one is fairly easy compared to other extracurriculars, many abuse this privilege by creating and abandoning clubs—all for the sole purpose of writing it on their resume.

Club officers and its members are dedicated in their clubs, and if some members don’t bother showing up, they would be discouraged. Imagine starting a club and see the long roster of members, then only having three consistent members throughout the year. It would be disrespectful if one’s ardor is used as a resume booster to others.

But clubs are not the only victims of resume padding; athletics, leadership positions, community service opportunities and internships can and are frequently embellished to seem more important.

Overall, resume padding harms everyone who is involved in it. A small lie on a sheet of paper degrades so many others, including the writer themselves. So now, before you type in one extra detail or a slightly fabricated fact to the infamous Word document, consider what that it truly means and how it would impact both yourself and the others. It is more important to value your personal experiences and integrity than a resume.