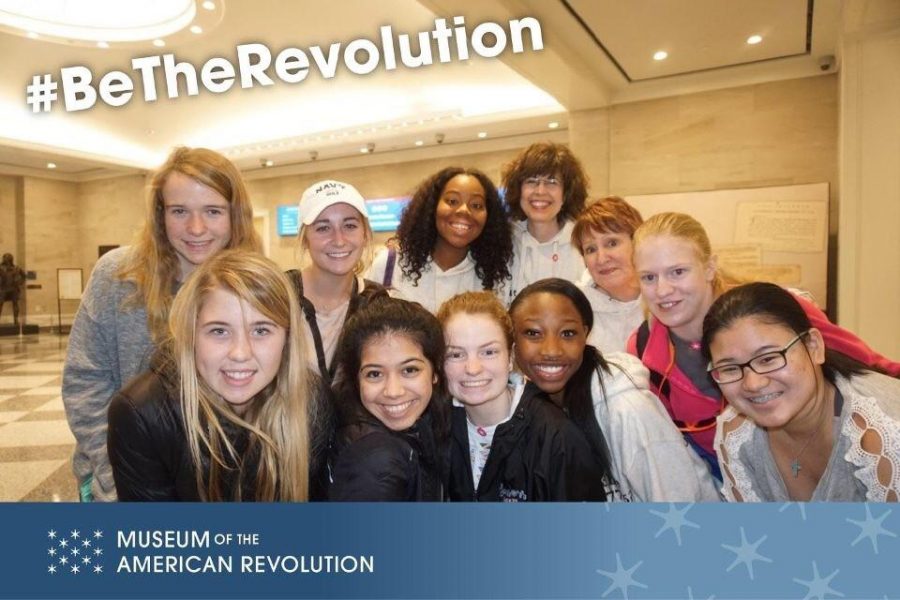 If you enter Dr. Bennett’s classroom around 1:10 p.m. on an odd day, you might think you have stumbled across a rehearsal of Lin-Manuel Miranda’s Hamilton. From mock congress meetings to fiery debates over taxation, the parts are all there, but this isn’t 1776. For the 11 Hockaday Seniors who took the plunge into the first offered semester course of American Revolution, this is class.

With the departure of the long-standing Civil War semester course spearheaded by former teacher, Dr. Traphagen, and shortly retiring, Mr. Kramer, Dr. Bennett took the reigns and created the first ever course solely dedicated to the study and exploration of the American Revolution.

“There has been so much interest lately in the founding fathers and the American Revolution, especially with the creation of the musical Hamilton,” Bennett said. “It’s not just amongst students and young people.”

Bennett, an 18th century specialist, created the course with the sole purpose of capturing a shared love for history and the revolutionist time period.

“[The American Revolution] has been one of my long-standing interests, so with Mr. Kramer retiring, I felt that it was a good time to launch another semester course with a trip,” Bennett mentioned.

That course-wide trip to Philadelphia was one of the reasons that Senior Ellen Schindel decided to enroll.

“Philadelphia was such a central place for the revolution and the government,” Schindel said. “For many people who were already interested in the American Revolution, the trip is a great way to dive deeper into the period first hand.”

Before the group’s trip to Philadelphia at the end of October, the students focused on the inner workings and intricacies of the founding fathers behind the American Revolution, as well as the minorities who played crucial roles during the time period.

“Everyone knows the basic story, but we hear it from an American perspective, focusing primarily on the founders.” Bennett said. “It is part of a larger story, and we wanted to know how slaves, free blacks and women impacted the revolution.”

Courtney Kitchen, another senior who enrolled last semester and a self-professed history buff, agrees. “No matter what history course you take, you always talk about [the American Revolution].”

Kitchen, who was previously enrolled in RUSH, joined Dr. Bennett’s new course with the hopes of learning more about the consequential time period in American history.

“I feel as though [the course] is very interesting without completely stepping out of your comfort zone,” Kitchen said.

After a successful visit to Philadelphia, where the class visited various historical monuments,  landmarks, and engaged in invigorating and complex class discussions through Socratic seminars and mock debates, the American Revolution class awaits its next batch of historical fanatics, willing to dive deep into what made the time period and the people in it tick.

“We still debate the ideas today that the founding generation struggled with,” Bennet said. “These ideas aren’t dead.”