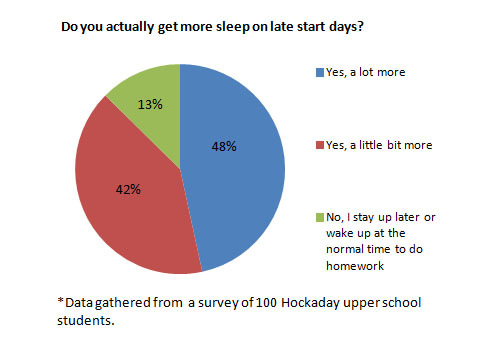 In a poll of 100 Hockaday upper school students, 87 said that they liked late start days. However, only 48 percent reported that they get a considerably more sleep on the late start days. Most girls use the extra time to finish work, either by staying up later or waking up at the normal time to work before school.

On Oct. 25, students will have their first late start of the 2011-2012 school year. Class does not begin until 9:55 a.m. on these days. This presents a problem for some students but most believe it is a fair trade off for the extra sleep they get on late start days.

Many students also realize the health benefits of extra sleep.

Senior Megan points out that, “when I’m too tired to work and focus, Y-periods are worthless because I’m falling asleep. If I get an extra hour or so of sleep, I’m more productive.”

The later start time also helps students avoid traffic. With the start time almost two hours later, Junior Madeleine, who lives in Plano, says that, “I get around three extra hours of sleep because I don’t wake up as early to avoid horrendous traffic or lower school moms in the parking lot.”

Although they have more time to do homework before school, students miss out on time to meet with teachers with the loss of a Y period.

On the other hand, many girls dislike them due to the loss of the Y period study hall.

“I don’t really like late starts since I don’t sleep in,” junior Ramie says, “I feel like I need to use that time to do the homework that I won’t be able to get done during the school day since our Y-Period is taken away.”

Also, late start days create problems for girls who carpool or have working parents. Senior Maddie drives her brother to school every morning, and late start days are no exception. Girls often must plan a new carpool system for late start days, or come to school at the normal time and thus are not able to reap the benefits of the late start.

However, 85 percent of students believe that two late starts each year are not enough. In previous years, there have been up to six.

“Late start days give us the opportunity to catch up on much needed rest,” junior Sarah says. “Any Hockadaisy can appreciate a little extra sleep.”