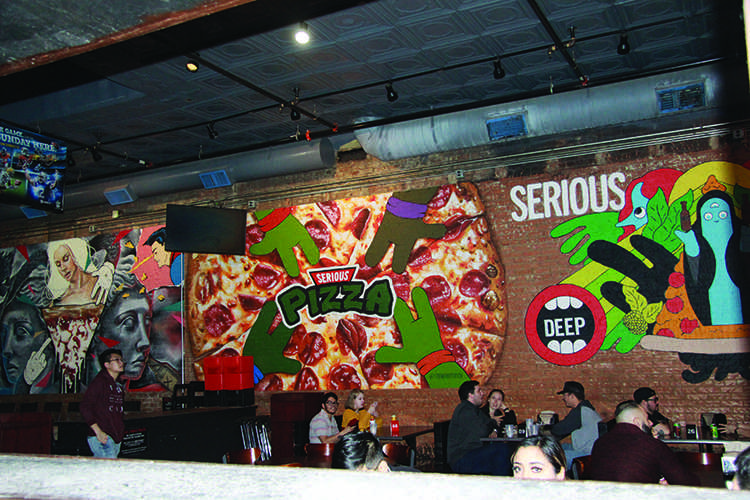 In the mood for delicious, big slices of pizza in a hip, urban atmosphere? Then think about trying Serious Pizza in Deep Ellum. Its name is definitely appropriate because it is one serious pizza place.

It doesn’t matter if you want to have a friends night out or a family dinner, this place is perfect for all. So just what is it that makes Serious Pizza different? Well, not only is the restaurant environment fun and festive, but the food is also a delight.

Walking down Elm Street, the big cardboard pizza slice stationed next to the words “Serious Pizza” is an immediate eye catcher. As I waited in line to order my meal, I looked around the room. Large creative graffiti art covered the walls, each work of art containing vastly different colors and details but always including the restaurant’s signature food.

There were many tasty options to choose from, so it was hard to make a decision. You could choose to order either a whole pie or a slice that is bigger than a person’s head. I ended up choosing three slices: BBQ chicken, vegetable and a mixture of ricotta, mozzarella and parmesan cheese.

My order came out within 10 minutes after sitting down at one of the many booths in the restaurant. I watched as two men carried out the three large slices of pizza, my stomach growling for the taste.

The dough was perfectly cooked on all three pies, lightly baked so that the thin crust was just the right amount of chewy. The three cheeses and sauce on the pizza danced on my tongue, a perfect combination of the two. This was my favorite one out of the three because it was simple and delicious.

The chicken BBQ pizza was my mom’s favorite because the BBQ sauce was lightly distributed and it had just the right amount of chicken. The vegetable pizza tasted like an ordinary vegetable pizza and was ultimately not very notable, as nothing really stood out to me.

All three pies were cooked perfectly and tasted good, but I think it all comes down to a personal preference on what toppings you want. And even if you are not a pizza fan, the spot also offers basic salads.

I do have to admit, though, the drive there was not a walk in the park. Maneuvering in and out of traffic and the many confusing roads of downtown Dallas was difficult. After dealing with all the fuss of getting through downtown, I had to find a parking spot. After finally finding a parking spot, I had to figure out the confusing parking meters. But after tasting the pizza at Serious Pizza, my complicated journey to the restaurant became worth it.

If you plan on making a trip to Serious Pizza, I would definitely would suggest planning ahead of time to avoid rush hour traffic in downtown.

Looking at the reviews before I went to the restaurant, the majority of the ones that I saw were all comments about how delicious the food was. After leaving Serious Pizza, I completely agreed with them.

Overall, I would say that Serious Pizza offers amazing food and an artsy environment, and I will definitely be back for more.

Story and photos By Julia Donovan