A Sine of Hard Work 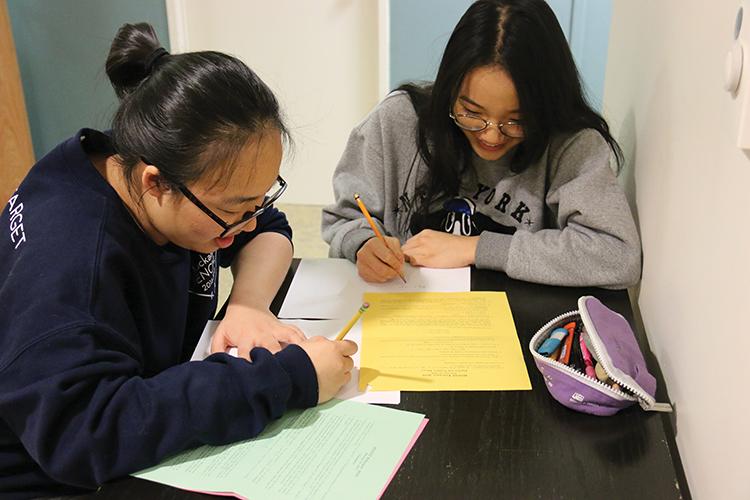 PICTURED ABOVE: Pictured left to right, junior Hope Fu and freshman Kyulee Kim discuss the math problems before them. The two are members of math club. After many hours of preparation, the team will travel to Boston from Feb. 15 to 17 in order to compete in the rigorous Harvard-MIT Mathematics Tournament.

In just a few short days, from Feb. 15 to 17, eight Hockaday students will head to Boston to one of the largest high school math competitions in the world, where they will compete against national and international students who excel at math.

The event is one of two away math competitions Hockaday participates in each year. Technically, any Hockaday student can try out to compete in the math competitions that Hockaday attends except the upcoming one hosted by Harvard University and the Massachusetts Institute of Technology (MIT), in which only math club members compete. However, there is fairly large variety in grade levels at Hockaday and in other math competitions, as Form III Dean and previous math club sponsor Jessica Chu explained.

“In order to be equitable and fair, for the [math competition] in February, any girl [in math club] who wants to tries out [can],” Chu said. “It’s not always based just on what current math class you are in.”

Since the type of math that math competitions use is so different from concepts one would learn in school, the class a student is in often does limit them in the math competition world.

To prepare for competitions such as the Harvard-MIT Mathematics Tournament, students practice problems in math club meetings but mainly use online resources, as most competitions have databases of problems from previous years.

This particular competition draws students from around the world and is considered to be very difficult. Many schools apply to compete, but the selections are very demanding, as only around 90 make it. The process of a math competition could be described as grueling, especially the one full day of testing at the Harvard-MIT event, with a total of four and a half hours of testing alone.

Senior and president of the Math Club Clara Shi describes the competition as usually quite difficult, especially one component of the testing: the guts round. During this part of the competition, students must bring their packet of problems downstairs immediately after finishing for their work to be scored in real time on a projector. Then, the students take another packet, with each one increasing in difficulty.

“You run down the stairs to turn [the package] in for them to score. It’s really fun but scary,” Shi said.

However, attending such a difficult event can still be very rewarding.

Students often find motivation through fellow competitors and the problems themselves, like a freshman and math club member Kyulee Kim.

“When I see challenging problems, I get motivated,” Kim said. “I think it’s a great opportunity to meet students who are interested in math from all over the country.”

The team aspect is another part of competitions that math club members enjoy. The team has several meetings throughout the year, but they also get to collaborate on team tests in competitions.

“It’s always really fun to collaborate with other team members to solve questions,” Shi said. “[The team tests] are often a little more challenging, but it’s cool to see the team work together.”

Additionally, students who attend the Harvard-MIT competition often get to see Hockaday alumnae that go to either of the two universities. For Shi, this is particularly meaningful, as she will be attending MIT this fall.

Despite the benefits of competing, there are still challenges and improvements to make in the world of math competitions, as teams are predominantly male, even from co-ed schools.

“Even when I [competed] in high school, it was the same thing. It’s always been so male-dominated at these

math competitions. I have not seen much of a change, unfortunately,” Chu said.

At the Harvard-MIT competition last year, Hockaday was in fact the only all-girls team, but despite the occasional lack of equal opportunity in the math world, girls sometimes find it as a chance for growth.

“I don’t think it’s a challenge, I feel like it’s more that I feel special and proving that girls can also be good at math,” Kim said. “I feel proud.”