Nothing to W(h)ine About In Napa Valley 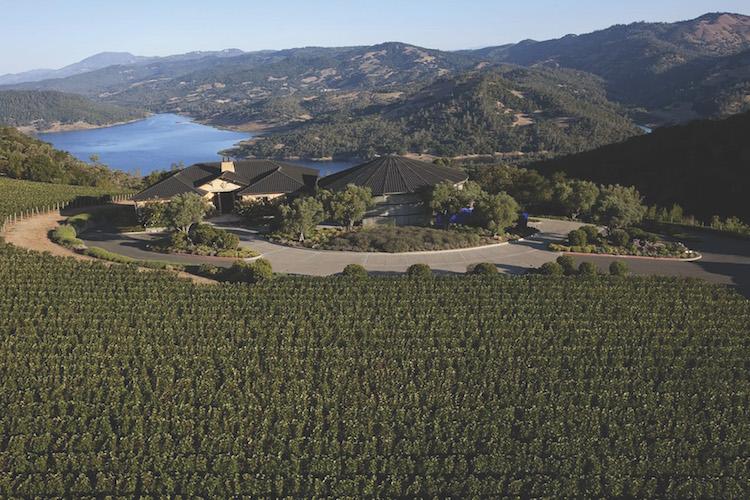 //PICTURED ABOVE: In Napa Valley, Colgin Winery lays nestled among the hills, overlooking the beautiful landscape of the area. Surrounding it are the grape vines, which—years later—will be turned into red wine. Ann Colgin ’76 started the winery after her education at Hockaday.

Napa Valley is home to some of the most beautiful wineries in the world, famous for the large fields of rolling hills and grape vines laying row after row. Nestled among these

hills lays Colgin Winery, a piece of property that was birthed by one of Hockaday’s finest, Ann Colgin ’76.

When Colgin first came to Hockaday, she never imagined that it would have a profound impact on her life. Colgin was a boarder from Waco, Texas and coming to the big city was daunting. However, once at Hockaday, she found that Dallas was the city for her. She realized that she loved two things in Dallas: Neiman Marcus, and Ed Long’s History of Art and Music class (HAM). Long, previous Fine Arts Department Lead Chair and Dean of Upper School, retired at the end of 2018 after a fulfilling 47 years at Hockaday.

“One thing that was incredibly influential in my life was as Ed Long’s art history class,” Colgin said.

Upon Colgin’s high school graduation in 1976, she knew that she wanted to study art history and went on to major in it at Vanderbilt University. After graduating from Vanderbilt, she landed a job at the store Sotheby’s, which sells and auctions jewelry, art, real estate and collectibles.

“It was there at Sotheby’s in London that I had my first taste of really great wine, and it made me find a new world that I wanted to explore,” Colgin said.

Colgin’s experiences from HAM allowed her to see the world through a more artistic lens. HAM gave her an appreciation for art, and she found art in an unlikely subject—winemaking.

“I think that there are times when HAM students don’t always see the long-term benefit [of HAM], so it is fun to see that aesthetics can be applied to so many fields,” Long said.

From her experience with rare wines at Sotheby’s, Colgin knew that wine making was something she wanted to pursue, and it led her to New York. There, Colgin was able to understand the making of wine, and the passion that goes into it. Later, while working in a wine auction house in Napa Valley, Colgin was given the opportunity to cultivate land for a potential winery. This land turned into Colgin Winery as she was able to continue her passion.

At Colgin Winery, she applies the appreciation for art that she found in Long’s class to the art of making wine. “We don’t chase the trends of making wine in a certain fashion. We are trying to make the best expression of what mother nature gives us from each specific piece of land,” Colgin said.

Colgin is practicing what Long encourages his students to see—to look beyond the class and for art in different mediums.

“I always hope that the course will strengthen eyes and ears and help make students more discerning in how they take in visual and audio information,” Long said.

Colgin’s experience at Hockaday has undoubtedly helped her to be at the forefront of the wine industry.

“Hockaday gave me curiosity about life, the want to learn about things you don’t know about. For me, that was wine at a particular point in time, and I had a great thirst for knowledge which ended up being a business—and a successful one,” Colgin said.

Colgin Winery wines are found at many fine dining restaurants. The winery produces only a few cases each year to maintain exclusivity and the rare taste attributed to their wines. She has led the business to produce award winning wines season after season.

After opening her winery, Colgin went on to meet her husband and business partner Joe Wender. He sees Hockaday as a place that helped Colgin to grow her winery into what it is today. Wine making is complex and requires passion to fulfill it. Wender sees Colgin’s curiosity and passion and appreciates the how much she pours into it.

“On one level it is very simple: you like it or you do not. However, making great wine is not easy,” Wender said.

Colgin winery has a unique take on wine. They only produce red wine and only supply to select people every year. The winemaking process is taken from a passion that Colgin and her husband have for fine wine.

“We both love to drink wine, and we love meeting people through wine,” Wender said.

Colgin Winery helps to bring people together with the this passion and greets people with a welcoming air that Colgin has helped to create in her vineyard.

“Much of our business is done over great dinners or lunches where we are sharing our wine and bringing people together,” Colgin said.

The wine making process is long, and Colgin took a while to develop the property into what she envisioned it to be.

“So it takes least seven years from the time you touch the land to the time that you sell your first bottle of red wine,” Colgin said.

Colgin puts in passion and hard work when making her wine and is there for every step along the way. Her careful attention to detail and perseverance for hard work developed through her time at Hockaday.

“We want to make sure that every detail of our products are elegant and luxurious— even the wooden presentation boxes,”Colgin said.

Ultimately, Hockaday helped Colgin pave the way for women to expand into the world of business and become strong business owners. Being a female business leader is difficult in this modern world, but by combining her passion and thirst for knowledge, Colgin was able to successfully open her winery. She ultimately attributes part of her success to lessons she learned while walking Hockaday’s halls.

“When people come to visit us at the winery, we want them to have a great experience that instills a lasting memory. The sense of graciousness and hospitality is something I took from my days at Hockaday.” Colgin said.