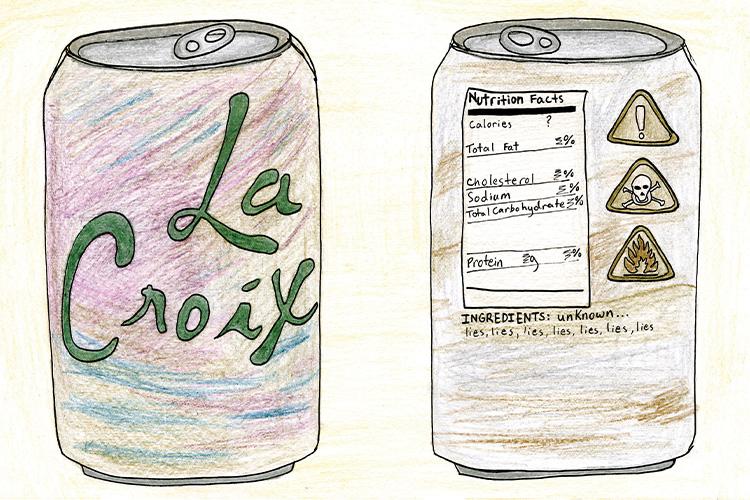 //PICTURED ABOVE: Everyday products, such as La Croix flavored-sparkling water, can have dangers lurking behind companies’ sometimes manipulative marketing claims.

Whether strolling around the grocery store, deciding which toothpaste to buy at the drugstore or staring at a menu on the wall of a restaurant, products’ ingredients are an integral part of many’s daily lives. While there may be the types of people who analyze the back of a peanut butter jar to the smallest detail, many of us just glance at claims like “organic” and “natural” to reassure ourselves before a small purchase.

Regardless of how much value one usually places on ingredients, most consumers agree and usually assume that the ingredients of a product should be truthful. However, even today, many companies dupe their customers in sometimes dangerous or unethical ways in search of economic gains.

In the summer of 2018, Jamba Juice came under fire in a federal class action lawsuit. The smoothie chain was accused of falsely market- ing their smoothies as made with “whole fruit and vegetables,” according to Jamba Juice’s advertising and menu. However, the brand often relies on cheaper, unhealthy ingredients.

For example, the smoothie “Caribbean Passion” contained five whole fruit ingredients: mango, strawberry, orange, peach and passion fruit, according to the menu. In reality, however, it contained no mango, orange or passion fruit.

In fact, a large Caribbean Passion smoothie contains a worrying 95 grams of sugar, and has its first ingredient as a “Passion Fruit-Mango Juice Blend,” mainly made of less expensive pear and white grape juice.

Today, the company continues to use cheap, sugary juice and sherbet as main ingredients in their smoothies, despite still marketing them as healthy.

The consumer who falls for companies’ lies such as the misinformation Jamba Juice spread should not be blamed. Many say people should not put so much trust in businesses’ advertising, especially when it comes to claims about the health of foods, but this mindset comes from decades of a lack of consumer protections. Logically and ethically, consumers should not have to thoroughly research foods’ ingredients online in advance of making a purchase.

Later, in October 2018, La Croix, a sparkling water manufacturer, was sued for dangerous ingredients used in their popular carbonated drink. The prosecutors found that the beverage contained an ingredient often used in cockroach insecticide, despite claiming to have only “all-natural” ingredients. The lawsuit against the company claims that La Croix contains the chemical limonene, which can cause kidney toxicity, and linalool, which is used in insecticide.

Even if the non-natural ingredients La Croix used were “safe” chemicals, consumers should have the ability to fully understand what they are buying.

One example of a partial success in consumer rights lies in the feminine hygiene industry. In 2015, the massive company Proctor and Gamble (P&G) and its rival Kimberly-Clark (the maker of Kotex), were put under pressure to fully disclose the ingredients in their products. This pressure from consumers ranged from boycotts to spoof videos of the companies to petitions.

Before the movement, both companies disclosed the ingredients in their tampons but not their pads. Eventually, both companies, listed their ingredients online, but advocacy groups were still concerned about labels like “fragrance” that disguised the chemicals in such products.

Similarly, many food companies use vague language to cover up dubious ingredients, such as listing “natural flavors” as an ingredient, while never disclosing where this “natural” flavoring comes from. In a perfect world, companies would not use these loopholes, but until then, there should be stricter regulation.

In July 2018, Johnson & Johnson, maker of products ranging from baby care to Band-Aids, was ordered to pay $4.69 billion to 22 women and their families at the end of a six-week long trial filed against the company for covering up asbestos in their baby powder. The lawsuit accused the company of not warning consumers against the dangers of their body powders’ ingredients.

Before the end of the trial, six of the 22 women had already died from ovarian cancer the lawsuit claims to be caused by the asbestos in the Johnson & Johnson baby and body powders.

This major lawsuit acts as a warning against loose regulations on companies. The suit claimed that Johnson & Johnson had covered up the presence of asbestos in their products for almost 40 years, keeping their customers in dark and endangering countless families.

Ingredients should be released for consumer protections, especially in the age of so many prevalently-used harmful ingredients, ranging from dangerous chemicals in skincare products to pesticides in food. Hopefully in the future, companies will be more transparent to their consumers. If the business world cannot move towards a more truthful path, the federal government needs to create stricter regulations and systems to prevent commonplace lies to consumers.