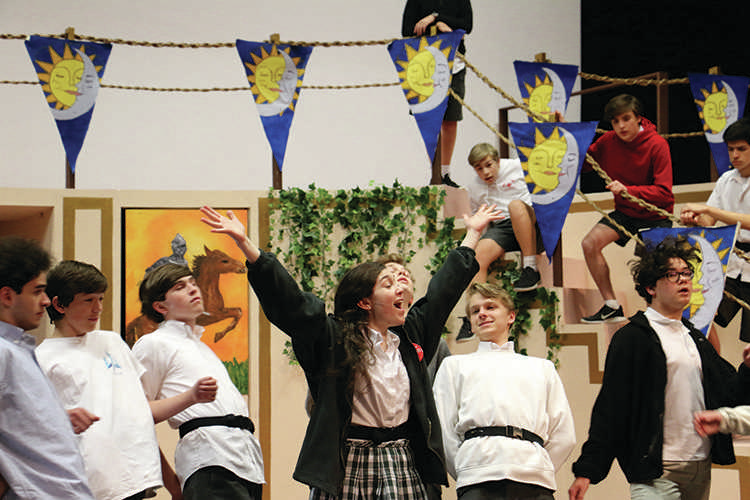 PICTURED ABOVE: Senior Kate Short rehearses for her role in Hockaday’s winter musical, “Once Upon a Mattress,” a musical comedy that retells the story of “The Princess and the Pea.” Short will continue to pursue musical theatre in college next year due to her love for the art form.

Many Hockaday students participate in countless extracurricular activities, but these three seniors are taking theirs to another level. Kate Short, Megan Muscato and Emily Ma discovered their love for the arts in various ways, but ultimately, they have all decided to pursue it in college. This is how each have journeyed from their beginnings and developed their passions.

Senior Kate Short grew up doing community theater and singing with her dad. She sang the harmony while he sang the melody and played the guitar. Soon, the two switched roles: Short began singing the melody, while her father sang the harmony. That was when her parents knew she would become a singer.

She grew up listening to various genres, including reggae, blues and folk music, which allowed her to develop a love for diverse music. Short began attending summer camps at a community theater when she was three years old. It was then that she found her passion for musical theater. At age seven, she began doing shows at the community theater, joined her school choir and acted in school shows.

However, when Short moved to Trinidad and Tobago freshman year, she gained a unique experience: singing for The Marionettes Chorale, an iconic performing arts group in the Caribbean.

“It was really cool to be taught music outside of the United States because we sang Trinidadian music, which is very different,” Short said.

After attending hours of rehearsal on the weekends, she performed in shows with The Marionettes Chorale for thousands of people in the capital.

The next year, Short moved back to Dallas and attended Hockaday, further exploring musical theater by joining the choir, doing the musicals and taking Hockaday Dance her junior and senior years. At Hockaday, Short found inspiration in her supportive teachers, especially Drama Teacher Emily Gray and Dance Teacher Christie Sullivan.

“Mrs. Gray’s so passionate about musical theater still, and that just inspires me that there are people that love doing this who do it for a living,” Short said. “Mrs. Sullivan’s been very helpful in boosting my confidence because she helped me with my pre-screens and summer camp auditions.”

Pre-screens are video submissions that many theater programs require. Once the program approves the pre-screen, applicants can schedule an audition, in which they must fly to the school to perform live.

Because many musical theatre programs are selective, Short applied to 16 schools, sending different pre-screens to each. In college, she’s most excited to do what she loves all the time.

“After college, if I end up doing something that’s a little different than what I imagined, that’s totally fine,” Short said. “That’s why I’m going to meet people, network and find opportunities.”

Megan Muscato began her acting career in seventh grade at St. John’s Episcopal School when she auditioned for a role in the school musical.

“At school they make you do these performances, and I was always the kid that actually wanted to do it and was doing it full out,” Muscato said.

Although she had taken dance classes when she was younger, Muscato had little experience being on stage as an actress. Nonetheless, she loved performing in the musical. After continuing theater throughout high school, Muscato applied to four arts programs, sending in artistic resumes, headshots and pre-screens for each. She has now decided to pursue her passion in the theater program at Southern Methodist University.

Like Short, Muscato was inspired by Gray to continue acting in college. When Muscato began high school career at Hockaday, she took drama and learned the techniques and nuances of theater, participating in her first straight play with Gray.

Muscato favors performing in straight plays, pieces of theatre that tell the story primarily through dialogue, but also enjoys musicals, in which music is essential to the story.

“I liked getting to use a specific skill set in a show that didn’t have singing or dancing in it,” Muscato said. “I love that you learn how to be comfortable with yourself while being comfortable in someone else’s body.”

Throughout Upper School, Muscato continued to act in Hockaday musicals and community theater performances with her middle school director. She did her first community theater show sophomore year and her second show in senior year.

In fact, Muscato’s second community theater show overlapped with both the Hockaday musical and college applications, but that didn’t stop her from performing with her friends.

“I love the community that theater builds,” Muscato said. “When you have scene partners, they become your best friends, and it’s a really cool connection that people have with each other.”

However, like many students pursuing art, Muscato had to gain support from her parents to continue her passion in college. At first, Muscato didn’t have the “backup plan” her parents wanted because all she knew was that she wanted to stay involved in theater. Her parents pushed her to double major for a more stable career path, so she decided to minor in graphic design.

Ultimately, Muscato’s goal is to remain involved in theater.

Unlike Short and Muscato, senior Emily Ma had no idea she would be pursuing the arts in college. In fact, she came into freshman year hoping to be a psychologist, and she had originally wanted to take drama for her fine art. After a year of film, however, Ma discovered her love for the art and decided to continue it through college after her film “One” got into the prestigious film festival South by Southwest.

“I always really liked storytelling, but I’m not a strong writer,” Ma said. “Believe me, anything that you can name in the arts, I’ve probably tried it.”

She had been a songwriter, an artist and a writer, but had believed she wasn’t good at storytelling until she tried film.

Hockaday Film has helped Ma discover her passion. The class requires students to submit their works to a number of film festivals each year and pays for three application fees.

By entering her works into numerous film festivals, Ma not only built a name for herself, but also experienced the atmosphere of the film industry. She was invited to be a panelist for the 2017 Bechdel Film Fest, where she met young female filmmakers working in the industry that pushed her to pursue the art and overcome the gender inequalities in film.

“Toxic masculinity does exist in the film industry,” Ma said.

She considers it to be her biggest challenge, but other female filmmakers have taught her how to handle these challenges.

Ma was especially empowered by actress and director of Home Box Office show “Euphoria,” Augustine Frizell, whom Film Studies and Journalism teacher Glenys Quick had invited to Hockaday for a panel with the film class.

“[Frizell] taught me that there are so many people who respect you for who you are,” Ma said, “Sadly, there are people that will repress you, but know that you can do it. Don’t let them get to you.”

Not only was Ma challenged with gender inequalities, but she had also struggled to convince her parents to support her decision to pursue film.

“At first, it was a hard no,” Ma said. “I argued with them for three summers straight.”

Her parents contended that the film industry was too immoral and not a place for girls. But Ma argued that people believe so because the media is in the spotlight, and the public isn’t able to see other industries with similar problems.

They also debated whether or not Ma should double major.

“What they don’t realize is, even though film is an art, if I study film, it will take up my four years,” Ma said. Many film schools don’t allow film students to double major due to the time commitment.

When Ma’s film was accepted into South by Southwest, her parents began to come around, but continued to push back even the summer before her senior year, urging her to pursue communications. Despite this, Ma remains inclined towards directing and has lofty ambitions for her film career.

“The end goal would be making my film the Best Motion Picture for the Academy Awards,” Ma said. “Although I feel like if I achieve that, I will have more be-all-end-all goals.”