No Sleep is For the Weak 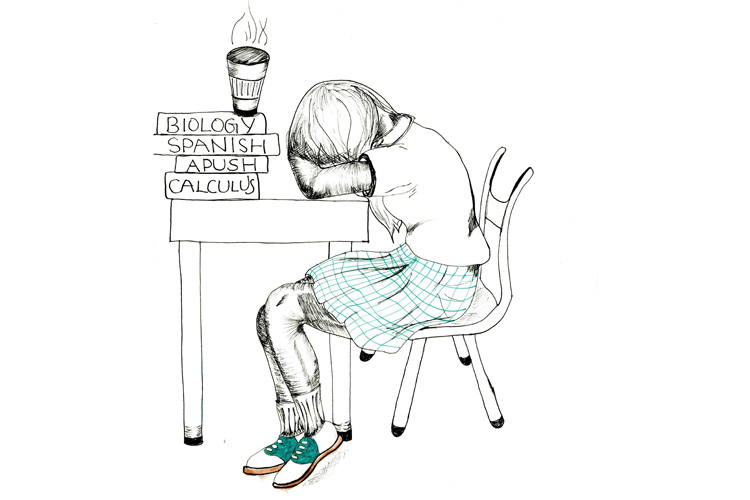 //PICTURED ABOVE: A sleepy Hockadaisy, overwhelmed by a heavy load of homework and studying, falls asleep despite her piping hot, large cup of coffee. Sleep deprivation is an ongoing issue that affects not only Hockaday students, but many students across the world.

Slowly sludging through overflow to walk into Hockaday each morning, my eyes droop heavily and my yawns seem to sound louder than the music I blasted to stay awake on my drive to school. My under-eyes appear as if I had gotten into a brutal brawl the night before, and prior to my morning cup of caffeine, I often prompt the apt comment that I look very tired from many of my teachers.

When I finally reach the halls of Hockaday before my first period class, the most common conversation I hear goes something

along the lines of, “I didn’t go to bed until 1 a.m.—I’m so tired,” which is usually spurs a response of something like “Lucky you! I was up until 2:15 studying for precalculus.”

These conversations often make me feel guilty for feeling exhausted after crawling into bed around midnight and getting five or six hours of sleep. For some reason, I seem to feel even worse for losing the “competition”

of who can function off the fewest hours of sleep and most cups of coffee. I find myself feeling incompetent and jealous that I wasn’t as productive as my friend who studied until three in the morning.

Writing these feelings down or saying them aloud, I realize how ridiculous and unhealthy this sounds, but attending a high-pressure institution which values hard-work and impressive outcomes such as Hockaday, I can’t help but wish there were a few more hours in the day for me to balance my schoolwork and extracurriculars with ample time to rest.

I am not alone in my struggle for finding a balance between working and sleeping. According to the National Sleep Foundation’s most recent poll, taken in 2006, more than 87 percent of high schoolers in the United States sleep far less than the recommended nightly eight to 10 hours of sleep. Basically, that means that nearly 90 percent of high school students are at risk of suffering from the myriad of negative consequences that stem from sleep deprivation. Ninety percent of us have an increased likelihood to have a hard time concentrating, anxiety, depression, a downhill trend in academic and athletic performance, weight gain and poor immunity. And these numbers are from 13 years ago, due to technological innovations and their bright screens, the number has probably increased.

The more and more I researched about sleep deprivation in students, the clearer the root of many students’ sleeping (or lack thereof) schedules became: stress. According to the Anxiety and Depression Association of America, 70 percent of people who feel persistent stress—whether that be from school, work or other factors—have trouble sleeping.

In reality, a combination of stress and lack of sleep actually counteracts the goal many students have when they stay up to study: in the long run, stress and little sleep lowers your academic performance. A 2010 American College Health Association’s National College Health Assessment reported that more than 25 percent of students say that stress and exhaustion lowered their grades and ability to finish a course.

So, despite the short term gratification that one might feel when staying up until sunrise to finish an English essay, it is incredibly damaging to a person’s academic performance (but more importantly, health) in the long run.

As someone who certainly does not sleep for eight hours nightly, these alarming facts terrify me. I don’t want to be the person who feels burnt out in high school, regardless of how hard I work. But how can I change my habits when there just isn’t enough time in the day?

Finding a healthy balance seems to be the key to avoid stress and improve sleeping patterns. I know that avoiding stress in high school sounds about as realistic as winning the lottery or seeing a unicorn, but there are relatively simple ways to practice self care to improve your health.

One big goal of the Hockaday Upper School this year (and the student council’s theme) is balance and self-care. I—as a natu- rally anxious and easily-stressed out person, according to literally anyone you ask—am tirelessly trying to find one. Since the new

year began, I have been journaling nightly and trying to establish a solid nighttime routine.

These past couple weeks, I can honestly say that I’ve felt happier since I started making a conscious effort to sleep more. While I still don’t always reach the recommended eight hours per night, I feel healthier just knowing that I am avoiding the long-term complications of fatigue.

If journaling isn’t your thing, there are many other resources you can utilize to maximize your sleep, according to organizations like Sleep.org and the National Foundation for Sleep. Cutting back on caffeine after lunchtime, not doing any homework in bed, scheduling more time for exercise, taking away all screens an hour before bedtime or meditation are some recommendations to improve your nightly sleep.

I know it is easier said than done, but by spending less time on social media and more time implementing self care into our routines, we can decrease our stress levels and therefore, increase our mental health and sleep time. In high school, it’s easy for all of us, especially me, to get caught up in an assignment and stay up late, and that’s okay once in a while.

But staying up once or twice a week versus every night is a big difference. I don’t want to have to watch my classmates, family and friends suffer from the consequences I mentioned earlier. I wouldn’t wish that upon

anyone, and certainly am scared in seeing those side-effects in myself.

I don’t want to sound hypocritical, and I know that I will never get to be the living depiction of Beyonce’s “I woke up like this, flawless” because I-got-13-hours-of-sleep mentality. But I do know that in order to live my fullest life, get better grades and improve my mental health, increasing the amount of sleep I get nightly is a big deal. I really hope that as a school and as a community, we can all recognize the detriments of sleep-deprivation and change the competition to see who can get the most rest.