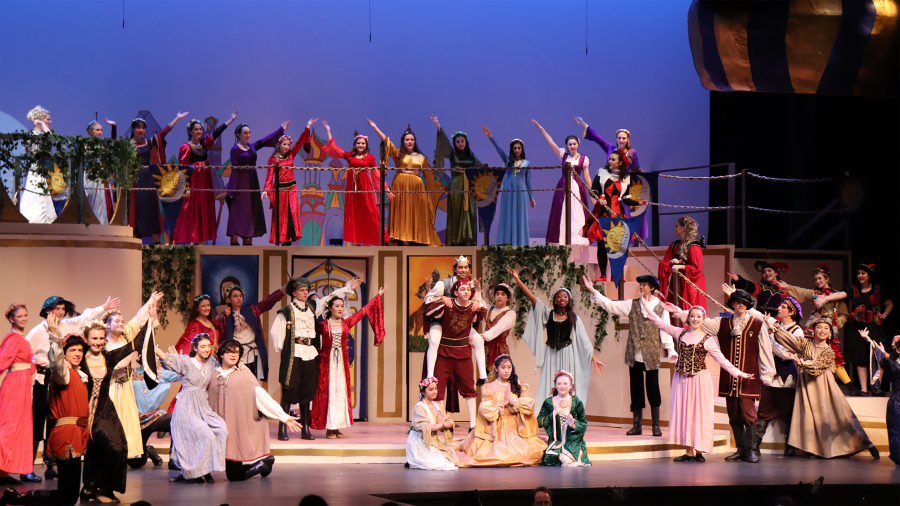 With the red curtains opening and the spotlight hitting center stage, the cast takes their starting positions and begins singing “Many Moons Ago”, the first song in Hockaday’s 2019 musical, “Once Upon a Mattress”.

The production was performed on Feb. 8, 9 and 10 in the Nancy A. Nasher and David J. Haemisegger Family Theater, with the cast consisting of students from both Hockaday and the St. Mark’s.

Every year the Fine Arts faculty meet to choose a musical. Bonnie Jean Coleman, Choir and Music Teacher, was one of the teachers to help in the selection process.

“We were looking for something new that we hadn’t done in a while and we also looked at what was available,” said Coleman. “We normally look at the students we have, our talent pool and what would be appealing.”

The comedy musical, “Once Upon a Mattress”, is based off the story of “The Princess and the Pea”, except the production tells the fairy tale in song, humor and dance.

A minstrel from the minstrel’s trio in the musical, sophomore Kemper Lowry enjoyed the humorous aspect of the musical.

“The thing I love the most about ‘Once Upon a Mattress’ is its emphasis on comedy,” Lowry said. “The show is a bundle of laughs from start to finish, so there’s never a dull moment on or off the stage.”

With Coleman, drama teacher Emily Gray and dance teachers Beth Wortley and Christie Sullivan were in charge of the performance part of the musical. The cast practiced for three months in preparation for their final performances.

Morgan Lutz, a senior who played the Witch in the musical, loves the process of learning and rehearsing the musical.

“It was so cool to see all of the pieces finally come together and form one wonderful, hilarious production,” said Lutz.

In addition to the performance aspect of the musical, there are also the behind scenes crews such as Tech Crew and Costume Crew.

Robert Kallos, Technical Director and Auditorium Manager, led the Tech Crew in creating the set, changing out the scenery and making sure everything backstage was going well so the production could run smoothly.

With a second story balcony, a spiral staircase and a revolving door that opened and closed to a hidden room, the set this year was massive and very intricate.

Led by Susan Hubbard, Drama and Fine Arts Coordinator, the Costume Crew styled the cast, assisted with quick changes and made sure the actors and actresses looked their best and appeared as though they were from a fairy tale.

With these three crews joining their forces to develop the musical, the production was a group effort.

“Constantly being with people who share the same love for the arts as you do is an experience you can’t find anywhere else, and it bonds the cast in a uniquely strong way,” Lowry said. “The incredible cast and crew and the friendships you form within it are what makes the musical so special.”