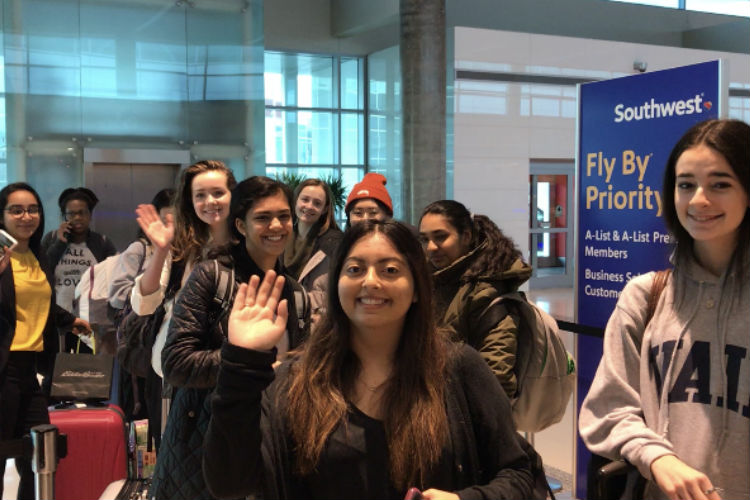 Although Model United Nations is one of Hockaday’s most popular clubs with around 85 members, not many students know what exactly is achieved in the club. Some assume that it is a more generalized form of debate, but it is much more than that. Model United Nations (Model UN) simulates the UN General Assembly and gives students a chance to learn about international relations, diplomacy and foreign politics.

Hockaday Model UN attended the North American Invitational Model United Nations (NAIMUN) conference from Feb. 14 to 17. NAIMUN is hosted by Georgetown University, but takes place at the Washington Hilton. This is the 56th year that it has occurred, with over 3,000 students, or “delegates,” in attendance.

At NAIMUN, there are larger general assemblies (GAs), which contain around 200 delegates. GAs have more general topics such as Disarmament and International Security, Special Political and Decolonization and Organization for the Prohibition of Chemical Weapons. In GAs, delegates represent countries, ranging from the United States to Togo.

There are also smaller specialized committees (SAs) that only have around 20 delegates. These committees have more specific topics, such as Council on Artificial Intelligence, Walt Disney Board of Directors or Supreme Court of the United States. Instead of representing countries, delegates are assigned “characters” that had something to do with the issue in real life.

Both types of committees demand different things from delegates—in GAs, your diplomacy skills are tested more since you must join together to create alliances, or “blocs,” in which you come up with resolutions to the problem at hand. In SAs, your quick-thinking skills are needed more, because of the fast-paced debate and fluctuating crises.

Each committee is headed by a “chair,” who is a student from Georgetown. Chairs are required to keep the flow of debate going and moderate the delegates. They are equipped with a gavel, which, at the end of the conference, is awarded to the “best delegate.” In smaller committees, there are also “crisis managers,” who think of new, exciting situations to throw at the delegates. For example, in the Council of Artificial Intelligence, delegates were expected to find a resolution regarding a rogue AI that was threatening to release the personal information of 100,000 Facebook users.

The conference is demanding and energy-sapping—most committee sessions started early in the morning and did not dismiss until late at night, so delegates were expected to spend around seven hours in committee depending on the day. Although a trip to another state is always exciting, there is hardly any time to relax due to the rigorous schedule.

Junior Katrina Liang finds Model UN challenging but rewarding. Through her participation in the conference, Liang was able to overcome the pressures of public speaking.

“The most challenging part of the conference was standing up and speaking in front of all my committee members during the moderated caucus,” Liang said.

Senior Tosca Langbert, who is one of three presidents of Model UN, attended NAIMUN for the last time this year.

“I really enjoyed the opportunity to argue with people for several days,” Langbert said. “[In my committee], we had to dig into some deep issues. And even though the hours were pretty demanding, it was worth it in the end.”

Story and photo by Ponette Kim