The (HA)ART(S) of Healing at the Annual HAARTS Assembly 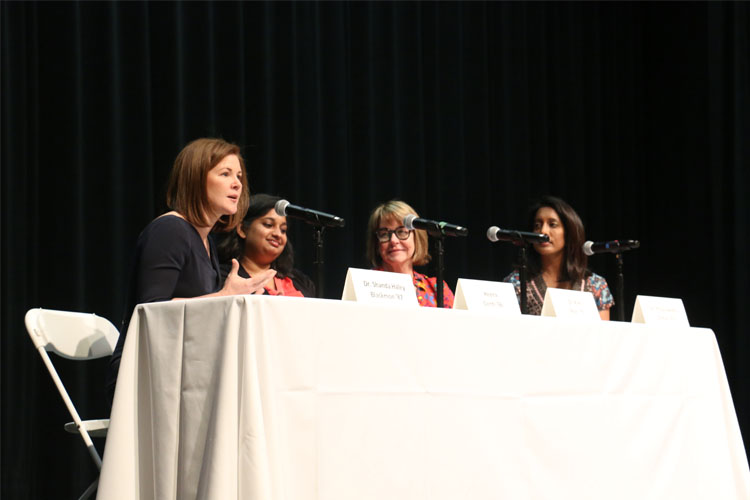 On March 25, four Hockaday alumnae returned to 11600 Welch Road to speak at the annual HAARTS assembly. Although the event usually features alumnae who have pursued the arts professionally, this year’s theme took an unconventional turn: the art of healing. The panelists—Dr. Shanda Haley Blackmon ’87, Heena Genti ’96, Dr. Kim Roe ’77 and Dr. Priya Swamy Zeikus ’93—each spoke about their respective careers involved in the medical field—whether that be as a doctor or a therapeutic artist. Read below for a brief overview of each panelist and her selected career path.

Although today Blackmon is an accomplished cardiothoracic surgeon, she started out her career pursuing an art form different from that of healing—painting. Blackmon spoke of the time that she dedicated to creating artwork as a young, aspiring artist. However, she quickly switched to the medical field when she realized that art was not her calling and has worked as a successful cardiothoracic surgeon ever since.

When discussing the largest challenges faced in her career, Blackmon revealed that her biggest hurdle had been trying to have children. However, as she later revealed, she and her husband had success after doing IVF.

“Sometimes, when you choose to go into the medical field, you hear that you can’t do this or that speciality, that it’s too demanding. You can’t have a husband or a partner. You can’t have a child,” Blackmon said. “The truth is, is that you can. You just can’t have all at once. You just have to be careful about how you plan it, and build your village to support you.”

According to Genti, she knew the path that she wanted to take before she ever graduated high school. This path just so happened to intertwine arts and medicine into one career—an art therapist.

“Art was always important to me. I loved that we were able to take art all through upper school, all through middle school,” Genti said. “The interest that I moved towards was psychology. And then I learned that you could have art and psychology together, and it just made so much sense [to me].”

Essentially, Genti works with a wide variety of patients as their therapist and uses artwork as her remedy. Starting off working at a non-profit arts center outside of Washington D.C. and later going on to run it, Genti eventually left after six years. Now located in Dallas, she is currently working with clients as an art therapist.

Much like Genti, Roe knew from a young age what she wanted her future career to look like.

“I knew when I was very young, five or six, that I wanted to be a physician,” Roe said. “All my experiences here at Hockaday just continued to support that. Especially when I almost failed English.”

Roe completed her residency in Obstetrics and Gynecology, but after doing so, her career took an unexpected turns: Roe closed her private practice to become a volunteer for the humanitarian organization Doctors Without Borders in 2010. After completing numerous trips to overseas sights such as Nigeria, Roe now splits her time between her work as a gynecologist and a volunteer for Doctors Without Borders.

Zeikus grew up in a family of doctors and spent her childhood summers working in hospitals, so always knew that she wanted to go into the medical field. However, it was not until she was in medical school, however, that she settled on her selected path: dermatology.

“The reason I chose dermatology was primarily because I could work with patients of all ages, I could talk to them, interact with them,” Zeikus said. “Dermatology is unique because it is the one medical field that I can diagnose a patient’s condition just by visual exam.”

Today, she has found great success in this career and has made a name for herself among the medical field due to her hard work and dedication.