Putting a Price on Admissions 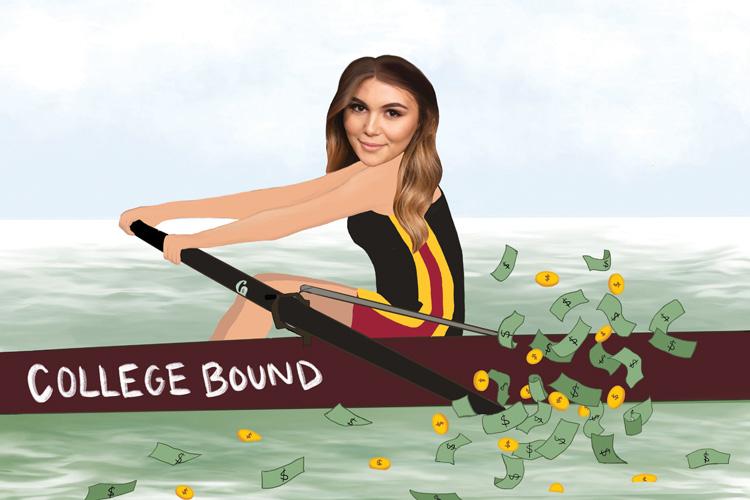 //PICTURED ABOVE: Ac”crewing” Admission: In March 2019, a college scam broke revealing the unjust admission of unqualified candidates to high-profile schools across the country. One of such candidates is Olivia Jade, social media celebrity who was accepted into the University of Southern California off the false claim that she was a crew team recruit.

In the eyes of a high school senior, the month of March is often notorious for one particular reason: college decisions. By April 1 of any given year, the majority of colleges have notified their regular decision applicants of their admission status, be that accepted, waitlisted or rejected.

However, this past March, the typical buzz surrounding the college scene found shape in a new form—the college scandal.

In March of 2019, federal prosecutors charged 50 individuals of having participated in a college scheme in order to secure spots at schools for candidates who, otherwise, would not have the credentials to be accepted. The scandal has brought to light countless individuals—parents, coaches and those working behind the scenes—all involved in the process of granting unqualified candidates admission to some of the nation’s top schools.

The scandal truly gained attention when high-profile and well-loved faces were exposed as partaking in this gross obstruction of the truth. Most notably, actresses Lori Loughlin, star of the television series hits “Full House” and “Fuller House,” and Felicity Huffman,

who held a role on the series “Desperate Housewives,” are two of the more recognizable names.

In today’s society, the process of applying to colleges is extremely competitive. With the number of applicants applying to a given school increasing every year, admissions officers must attentively review each candidate’s application, ultimately making only the most thoughtful decisions about which students to admit to their incoming class.

So how exactly were 33 parents able to so expertly maneuver their way around this system of thorough review? The answer is William Singer: college guidance counselor of 30 plus years and mastermind of the entire effort. Singer charged his clients inordinate sums of money, and in exchange, he engaged in countless illegal activities—bribing college coaches and test proctors, falsifying test scores and even fabricating student biographies.

The general public’s immediate reaction was disgust at this immoral abuse of the system that college applicants put so much faith and hope into. And rightfully so. The actions of Loughlin, Huffman, Singer and the countless other individuals involved in this scandal are criminal, and they should have to face the consequences of their actions.

The process of applying to colleges is stressful enough by itself. The idea that you are a mere name on a page competing against thousands

of other applicants much like yourself can be a debilitating concept to try and wrap one’s mind around. One thing that has brought me solace, however, is the fact that admissions counselors, for the most part, conduct holistic reviews of candidates, deliberately analyzing each aspect of a student’s application to ensure that they admit the best possible fits to their respective institutions. So, however taxing the college process may be, it calms my mind to know that I am being judged fairly and equitably against my peers.

Essentially, what Loughlin, Huffman, Singer and the numerous other parties involved in

this crime epitomize is the idea that the college admissions process, however “holistic” it may be, it a process that can be manipulated. Rigged. Cheated. That all it takes to gain admission to the most competitive institutions across the country is to write a check. That no matter how much effort and time you dedicate to your studies and extracurriculars, it will never be enough. There will always be another Olivia Jade, prepared to falsify whatever documents or fabricate whatever lies she may have to in order to secure a spot in an incoming class.

So to all of the individuals involved in this scam of the century, I ask you this: what kind of message does this portray to the youth of today’s society? To the honest, hard-working students who don’t have the luxury of depending on a check to get them places in life?

Our country was built from the ground on principles of ethics and hard work. There used to exist a time in which rags to riches stories were plentiful, in which one could depend solely on their dedication and drive to go far in life. But now, society continually suggests that those on top will always prevail in the race that is life, no matter the circumstances at hand.

There is no denying that the college process is competitive and cut-throat, and only continues to grow more and more competitive each year. It is sure to be riddled with its setbacks, its defeats. But that is simply a part of life.

What is unethical, however, is the acceptance of a student based on falsified information and devised lies. Through these attempts to get their children admittance into college, these parents may be doing the exact opposite: robbing their children of their maturity, sense of self-respect and acquired adulthood, all of which are developed through the natural college process.