Saturn V Girls Blast off to the World Festival 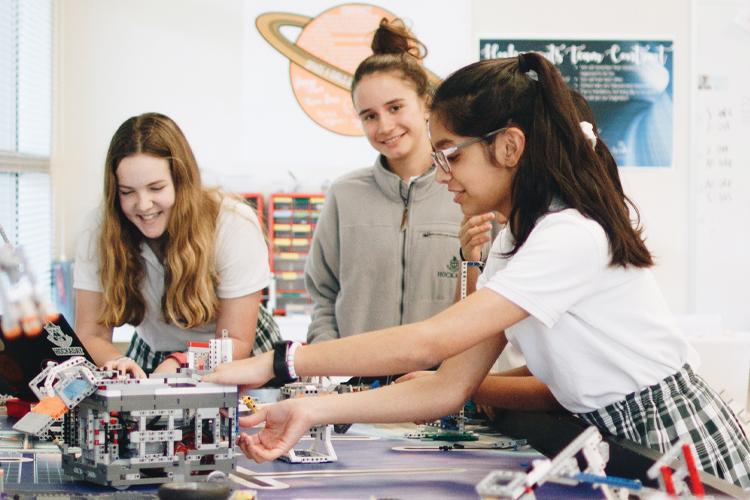 //PICTURED ABOVE: The Saturn V Girls robotics team makes the final edits to their robot before the competition, which is to be held April 17 to April 20. The team will run their robot and present their project at the FLL World Festival in Houston, Texas.

Houston, the Saturn V has landed. Five middle schoolers will be in Houston, Texas April 17 to 20 competing at the FIRST Lego League World Festival. The Saturn V Girls robotics team, comprised of eighth graders Sydney Slay, Jayna Dave and Nina Dave and sixth graders Celine Ebert and Anika Kapoor, will go for the gold in the four-day competition.

“I can’t wait to compete at the World Festival this year. Our team is looking forward to celebrating everything we have accomplished this season,” Jayna Dave said.

FIRST Lego League (FLL) is the second level of the FIRST competitions, geared towards middle school students developing their coding and problem-solving abilities. The most well-known facet of the FLL competition is the Robot Game. In this event, the robots that students build and code need to complete certain missions, like picking up a block or throwing a ball across the table, in order to gain points during the allotted time.

However, this is not the only event. There are three presentation-based components, the innovative project, Core Values — or how the team worked together during the design process—and robot design to determine the champion.

To accompany their robot, teams also design a project around the theme for the year—space and making life better for astronauts. Middle School science teacher Lisa Dwinal and Middle School math and science teacher Laura Baker, the Middle School robotics advisors, arranged for the five Hockaday robotics teams to speak with two astronauts, four aeronautical engineers and the Dean of Engineering at Southern Methodist University in order to gain inspiration and improve their proposals. Along with imagining a solution, the girls also have to prototype their product and present their idea to a panel of judges for scoring.

“It’s almost like Shark Tank. They need to sell their project,” Baker said.

The Saturn V Girls designed a solution to ameliorate the issue astronauts face as they are unable able to taste their food. Because people’s sense of taste is based 80 percent on their sense of smell and because astronauts cannot smell the food they eat very well while on the International Space Station, they can- not taste or enjoy their meals as much as they otherwise could. In order to solve this problem, the Saturn V Girls created scratch-and-sniff stickers to attach to the food packaging for astronauts. When they eat the food, the astronauts can smell the sticker and therefore improve their experience by tasting their meal better.

This was not the only problem the Saturn V Girls fixed with their stickers. They proposed that putting a lavender-smelling sticker in their mask before bed would help astronauts to sleep better and longer. The Middle Schoolers also thought that if the astronauts were able to put a sticker of their choice in their mask while cleaning the bathrooms on the space station, they would be able to block out the foul odors. The final prototype required lots of collaboration and imagination to conceive.

“We went through a lot of ideas before we settled on [the scented stickers],” Jayna Dave said. In order to perfect their robot and presentation, the Saturn V Girls worked together during their elective periods two times a rotation, during lunch time once a rotation, after school every Tuesday, Thursday and Friday, and on Sunday afternoons, totaling about nine hours a week. Over breaks the girls also take the equipment home and dedicate additional time to their robot and project.

“Their time invested shows their strong commitment to robotics and the FLL program, and I hope that their hard work pays off and they reach the goals they have set for the World Competition,” Dwinal said.

In order to attend the FLL World Festival in Houston, most teams have to compete three different times, in a preliminary qualifier, secondary qualifier and regional championship. However, the Saturn V Girls placed high enough in the preliminary qualifier to bypass the secondary qualifier and go straight to regionals. At their first competition in December, the team won the First Place Championship award, the overall winner of the competition, and second place in the Robot Game, meaning they had the second most points of all the teams in that aspect of the competition. All five Hockaday FLL teams, the Saturn V Girls, the Intergalactic Unicorns, the Hockanauts, the Space Daisies and the Shooting Star Daisies, advanced to the regional championship.

“[All of the teams] did an incredible job. Everybody was so impressed and amazed with how they performed at the championship,” Baker said. “I’m really proud of how hard the girls have worked and how far they’ve come.”

The teams did not do it alone. Juniors Sidney Wang, Meghan Shimer and Anoushka Singhania mentored the Saturn V Girls and the rest of the robotics teams once a rotation during conference and lunch. They also provided practice judging sessions right before the competition. Jayna and Nina Dave supported their mentors at their competition and even plan to join their independent high school robotics team next year.

“They are a very dedicated group of girls, and they are always looking to take their robot and project to the next level,” Shimer said. “They take advantage of every opportunity to learn new things, and they have been super fun to mentor over the past few years.”

As the competition nears, the Saturn V Girls have been hard at work to make the final modifications to their project and robot. They tweaked their robot attachments and code in order to gain the most points possible during the Robot Game. To improve their stickers, the Saturn V Girls contacted more experts in the field for their opinions and researched the process to make stickers with their desired smells for the food packaging.

Saturn V Girls’ team captain Slay cannot wait to meet teams from around the globe and explore the different ways FLL affects various countries. Teams from 45 countries, including the United States, will be competing in the FLL World Festival. Slay also hopes to grow closer with her teammates as they work towards the common goal of taking home the first place trophy.

“I really hope to have fun with my team at the World Festival, and we are striving to win an award at the festival to display how hard we have worked this season and how proud we are of all the work we have done as a team,” Slay said.