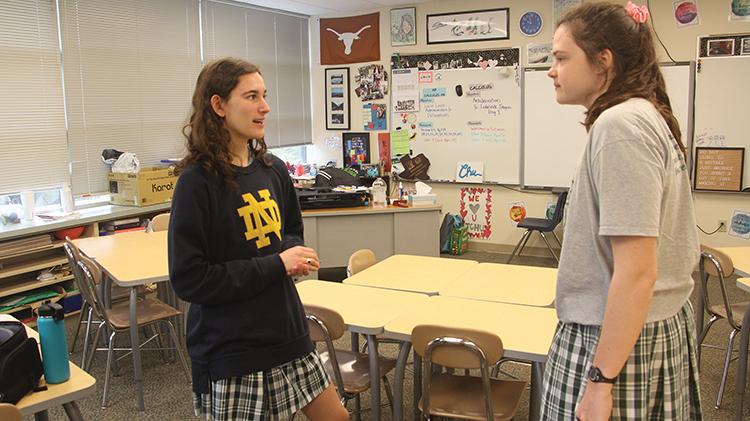 //PICTURED ABOVE: Former volleyball captain, Maddy McBride, discusses with incoming captain, Mia Weathersby, about the next volleyball season and how to be a good team leader.

Every year, Hockaday students, parents and coaches gather at the annual Athletic Banquet to reflect over the year and celebrate all of the athletic achievements. However, this year Hockaday athletics focuses on the future as well by having current captains symbolically “pass the torch” to the incoming 2019-2020 sports captains.

The Athletic Banquet will take place on May 7. Athletic Director Deb Surgi, the Athletic Board and the Athletic Department hope that through these changes in the captain process that the Hockaday community will come closer while celebrating student leaders in athletics.

As a change in the captain selection process this year, athletes and coaches will select a captain at the end of each sports season for the next year. Through creating a more coherent structure, the captain system will be more unified and consistent which will allow all sports teams to be easier to manage.

By implementing this, the Athletic Board is able to introduce incoming captains to their leadership positions and allow them time to think about the legacy they want to leave on the team. This also gives the previous captains the opportunity to set a precedent for the next seasons.

The Athletics Department believes that mentorship is key, and by implementing these changes to the captain program and the Athletic Banquet, captains will be able to work together and learn from their past predecessors. Also, this allows coaches to spend more time with incoming captains and planning the future seasons.

Surgi believes that captains value the legacy that they leave and how they can impact the team in their season and the future.

“I think my inspiration [for the ceremony] is just being able to experience the importance of creating legacy,” Surgi said. “In meeting with the Athletic Board and meeting with students here and talking about what it is that they value about Hockaday and I think they value the past, their impact on the present and their aspirations for the future.”

Throughout the planning process, the Athletic Board and Surgi thought it was important to be able to create a ceremony to honor captains and allow them to share their knowledge with incoming leaders.

Athletic Board Chair Meredith Jones thinks that the ceremony will recognize captains and all that they do for their respective sports teams.

“We thought it just be a symbolic but also to have people take responsibility for being captain and to put more meaning to it,” Jones said. “It is something we wanted to add to the Athletic Banquet to make it more special, to recognize people, and have other people know who their captains are because that’s a big accomplishment to have your peers vote for you to lead them.”

By implementing this ceremony, the Athletic Department is hoping that captains will be acknowledged more broadly by the Hockaday Community. In the past, captains have never had a specific celebration that welcomes them to their position or received recognition for being captain of a sports team.

Surgi as well as many other coaches, students and athletes want the captain position to become known as a student leadership position. Through this ceremony, Surgi and the athletic community are pushing for the acknowledgement that athletes deserve.

“I think for the people going out as captains, [the ceremony] will be nice, and it is kind of like handing off the team to the next people,” Jones said. “I think it will have people look up to the captains more or have people say, ‘Oh I want to be a captain’ and realize that it does take a lot of work and you do need to be a good teammate and support everyone.”

During the banquet, a shiny Split-H pin will be handed to each incoming captain and they will also receive a description of their job as captain. Surgi and the Athletic Board thought it was important for leaders to pass on their knowledge from being captain so that the incoming team leaders have a better understanding of how to perform as captain.

By passing down knowledge from existing captains, incoming captains can examine what worked for them and what didn’t so they can improve upon their challenges during the next season.

To ease the transition between incoming and outgoing the captains, Surgi and the Athletic Board are implementing a leadership seminar for incoming captains and the end of the school year. This seminar will prepare captains for their positions and help them understand how to lead a team.

It is important to many captains that they leave their team in “good hands” for the years to come. Hockaday senior and varsity tennis captain Morgan Lutz hopes that she will leave a lasting legacy on the tennis team.

“I think that I would love that everybody after [me] would be really inclusive and try to unite the team and do a lot of things just outside of playing tennis so that the team can have fun together and trust each other,” Lutz said. “Everybody is fostering that community together.”

Community is becoming a huge part of Hockaday athletics. By hosting new ceremonies, activities and athletic opportunities, Surgi and the Athletic Board are trying to build a community of people by joining them together in traditions. This gives people events to look forward to every year and will expand upon the community.

Tradition is an important part of building any community. By implementing this ceremony, Surgi and the Athletic Board hope that they can build culture by creating traditions to celebrate the success within the athletic community.

“I think you have to be progressive and forward thinking, but I think there is value in ritual and tradition because it helps to build a culture,” Surgi said.