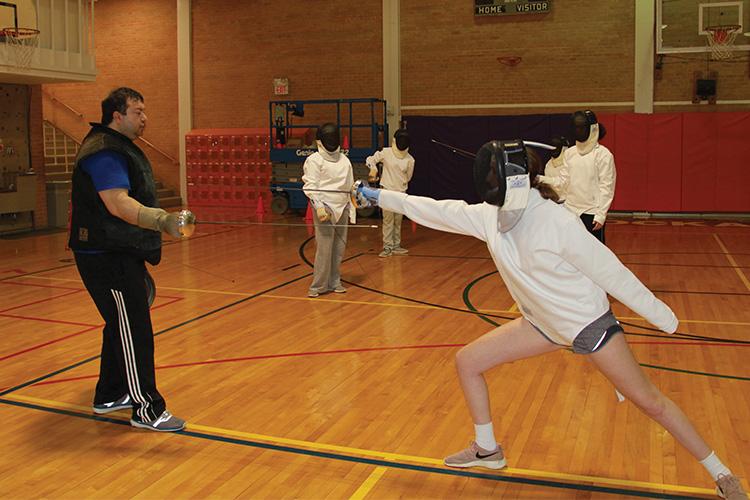 //PICTURED ABOVE: New épée fencer freshman Carlota Fedorko lunges and attempts a counter-six attack guided by fencing coach Amgad Badawi during an after-school practice. This year marks the second year that the fencing team has practiced on campus instead of at St. Mark’s School of Texas, as they have in the past. This convenient location allows for fencers to spend more time working on their skills and improving their team bond.

As the spring sports begin to progress throughout the season, many teams are not only passing down the torch from previous years, but also embracing new beginnings. The Hockaday fencing team, having undergone lots of change in the past few years, is now experiencing another significant leadership adjustment as Amgad Badawi assumes the position as head coach.

Badawi officially began his position at the beginning of the 2019 spring season, and is now fully in charge of the Hockaday Varsity Fencing team. Having originally practiced at the St. Mark’s School of Texas, Hockaday fencing was moved back to Welch Road during the 2017-2018 school year.

Fencing is a complicated sport that has three subdivisions of weapons: épée, foil and sabre. Épée has the longest sword length of 110 centimeters and the heaviest maximum weight of 750 grams. Foil, with 110 centimeters length and 500 grams weight, is the lightest of all three weapons. Sabre is the only weapon that allows thrusting and cutting, while épée has the valid target area for as much as the entire body. The Hockaday fencing team currently hosts all three categories of fencing weapons with nine épée fencers, ten foil fencers and six sabre fencers.

Having experience with all three categories of weapons, Badawi is a United States Fencing Coach Association (USFCA) certificated Master of Arms and also a certificate referee instructor and observer of USA Fencing. Badawi also previously coached the Lebanon National Fencing team during the 2012 Olympics held in London.

Badawi has experienced a combination of both challenges and excitement as he has taken on this leadership role within the Hockaday fencing program. While most Hockaday fencers are highly motivated and willing to learn, their accumulated knowledge and experience from the past two years is not as abundant as Badawi expected.

“The biggest challenge when I came here was [Hockaday fencers] lacked information about fencing,” Badawi said. “I had to start from the beginning and teach the team from the most fundamental knowledge.”

As a matter of fact, Badawi has taken on a different type of coaching style to help the Hockaday fencers advance. The team’s training is currently being separated according to weapons, while fencers with each weapon will rotate on a daily basis to receive an hour of private lessons only focused on their weapon-related skills and knowledge.

The team, on the other hand, is also busy adjusting to the new coaching style having already been through a handful of changes in the past two years. Having been paying attention to the attitude of the team in general, junior and captain Abby O’Brien feels like there’s also obstacles on the team side.

“[Fencing] was different from last year,” O’Brien commented. “Coach Badawi seemed like he was going and also has been pushing us a lot.”

Although there were initial concerns about adjustments to the new coaching style, the Hockaday fencing team accepted the differences with open arms. The team soon discovered that they were not disappointed by the new changes after overcoming the new adjustments and difficulties. Junior Shalini Kishore, having been on the team since her freshman year, is very enthusiastic about the new teaching methods.

“I was a bit nervous because we’ve had the same coach for a long time,” Kishore said. “The style is very, very different coaching wise, but I would definitely say that I’ve been enjoying it and It’s been a really fun experience overall.”

Badawi is currently planning on pushing the team into more competitions and tournaments. While many team members are feeling pressured into competitivity, many also enjoy the experience of learning through competing.

“By increasing the number of competitions, we are going to feel more comfortable and experienced,” Badawi suggested. “I hope to see some girls winning by the end of the next season.”

Following Badawi’s lead, many Hockaday fencers are now competing in bigger and

more competitive tournaments. On March 30 and 31, USA Fencing’s Regional Open Circuit tournaments were held in Carrollton, Texas. Five girls from Hockaday participated in Division II and IA competitions, and they were all ranked with significant improvements. Since Division 1A is opened to any fencers with any rankings, it is naturally more challenging with more diversity or skills of the opponents.

With three out of the five girls having no or very few experience at competing at this level, Hockaday fencers gained not only experience, but also reward from their efforts. With freshman Angela Yuan placing eighth in Women’s Foil Division 1A, Sohee Chung placing ninth and Mohana Ghosh placing sixteenth in Women’s Épée Division II, Hockaday fencers achieved incredible accomplishments and were very proud of their success.

While fencing is becoming more competitive for many fencers, others also enjoy the close-knit community that is a product of the team.

“I like how we are at different experience levels and with different backgrounds of fencing,” O’Brien said. “As the captain, I wish to emphasize on community and to maintain a strong bond. If people enjoy coming to practice, there will be more willingness.”