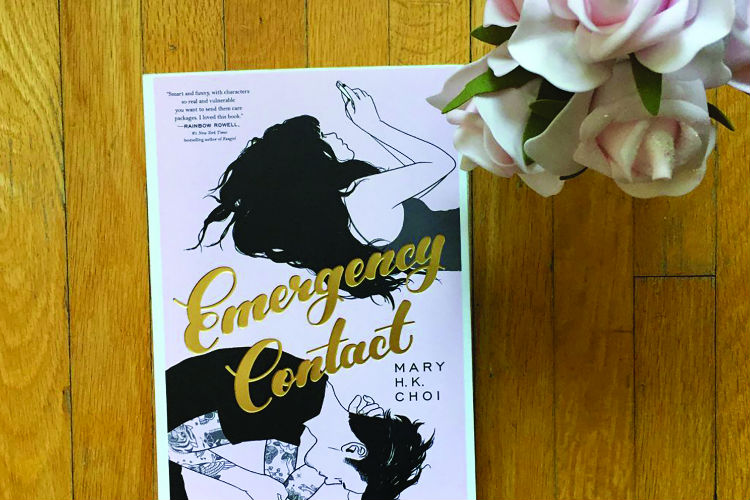 If I had to guess, I’ve probably read around 300 books in my lifetime. And while many of those were akin to “Magic Treehouse” and “Diary of a Wimpy Kid,” the bulk of the books are in the Young Adult genre. So, I guess you could say that I know a good YA book when I read one, and “Emergency Contact” by Mary H. K. Choi definitely fits under that category.

“Emergency Contact” was published on March 27, 2018, and has amassed reviews from esteemed authors such as Rainbow Rowell and awards like the Goodreads Choice Awards Best Young Adult Fiction award.

I was first drawn to this book because of the beautiful cover art, which is light pink with black illustration and gold lettering. In this case, you should judge a book by its cover, because it’s truly one of the prettiest covers I’ve ever seen.

As for the actual storyline, it’s pretty realistic—the two main characters, Penny and Sam, live in Austin, Texas. Penny is a freshman at the University of Texas and is adjusting to living alone, and Sam is an aspiring documentary filmmaker and college dropout who works and lives at a coffee shop.

The two meet through Penny’s boisterous roommate Jude, who is basically the opposite of Penny. Penny and Sam start a friendship after Penny helps Sam when he has a panic attack in the middle of the street, thus coining the moniker “emergency contact.”

The words “emergency contact” take on a different meaning with Penny and Sam, who quickly become each other’s texting go-tos and form an unusual friendship where they only text, but don’t make an effort to see each other in real life. Nevertheless, Penny begins to quickly fall for Sam.

In between this odd virtual relationship, Penny deals with her mom’s drama, her strained relationship with Jude and a story she’s writing for her creative writing class. Sam struggles with his demonic ex-girlfriend and shooting his first documentary. But they still come back to each other, sharing their deepest and darkest secrets.

The book ends with Penny and Sam finally reconciling in person and Sam realizing that he’s also fallen for Penny. A sort of stereotypical ending, but it doesn’t matter because after reading the book, you want them to be together so bad.

Choi has a talent for creating characters so real, they almost feel like they could be someone you know. She includes the tiniest details, like Penny being lactose intolerant.

Sometimes, characters in books can be pretty one-dimensional, but not Penny and Sam. Why do I know that Sam’s mom’s favorite tart flavor is plum?

Choi doesn’t shy away from the big issues, either. Penny is Korean, and throughout the novel she is constantly fighting racist remarks made by her roommate’s best friend or someone else. And when Penny finally shares with Sam that her old tutor raped her, Choi weaves a scenario so heartbreaking that you want to reach through the pages and give Penny a big hug.

Overall, the storyline, while being pretty plain, is highlighted by Choi’s storytelling skills and ability to embellish mundane scenarios. If you’re into YA books, witty humor and scenes so touching that you’ll emit a sincere “aw,” give “Emergency Contact” a read.