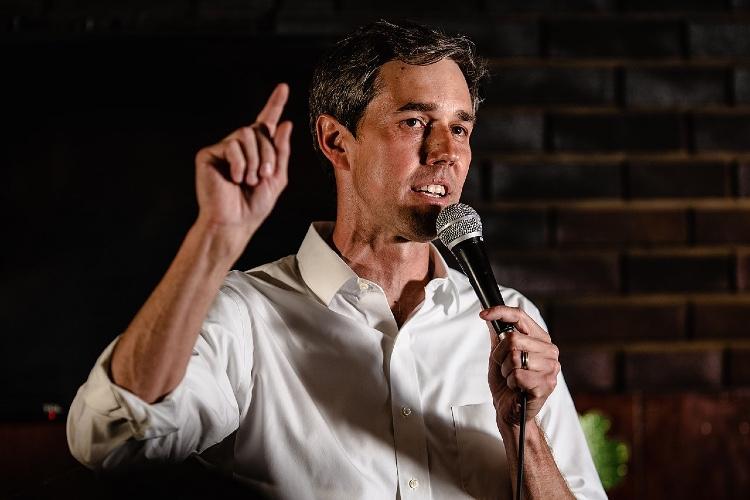 //PICTURED ABOVE: Former Texas Congressman Beto O’Rourke speaks to voters in Cleveland on March 18. O’Rourke announced his candidacy for president on March 14.

Beto O’Rourke, Bernie Sanders, Kamala Harris, Pete Buttigieg, Julian Castro, Cory Booker and Elizabeth Warren: these are just a few of the 20 Democrats that have announced their candidacy for President of the United States. In fact, Joe Biden made the announcement just on April 25. Others, like Stacy Abrams, have not officially launched their campaign but may join the race soon.

While the first primary in Iowa does not occur until Feb. 3, 2020, many candidates have visited key states to win the Democratic bid for president, building massive campaign networks and earning millions in donations. According to Upper School history teacher Kirsten Blevins, the main motivator behind the large number of Democrats running for president is their desire to beat President Donald Trump.

“The feeling in the party is that it is an absolute necessity to win in 2020, so many candidates are throwing their hats into the ring to see if they can be the one to bring home the victory for the party,” Blevins said.

President of the Young Democrats Tosca Langbert also believes that the need to raise large amounts of money to fund a successful campaign drives candidates to enter the race early. If they are in the national news earlier, they have the possibility to gain more donations and win the “money game.”

“In order for candidates to really get the traction they are looking for and to be able to compete in a such a crowded field, they have to raise an exorbitant amount of money,” Langbert said.

One candidate that stands out to both Langbert and Blevins is South Bend, Indiana Mayor Pete Buttigieg, the first millennial and openly gay person to run for President. Buttigieg markets himself as the opposite of the current president: young, intellectual and experienced in executive government. His policies focus on climate change, Medicare for all who want it, LGBTQ+ protection and repairing democratic institutions by rearranging the Supreme Court and abolishing the electoral college. Buttigieg has recently surged in the polls, and in many polls, he sits in third behind Biden and Sanders.

This race, however, does not just concern the Democrats. Former Starbucks CEO Howard Schultz is a potential independent candidate. Co-President of the Young Republicans Sarah Crow believes that third-party candidates possess a slim chance of winning the 2020 election but can have a significant impact on which candidate actually wins the race.

There is currently one challenger to President Trump in the Republican primary, former Massachusetts governor Bill Weld. Weld is a relatively unknown candidate and only has 8 percent of Republican support according to a CNN article on April 16.

“Historically, an incumbent president has not lost a bid for re-nomination since 1884, so I think it will be an uphill battle for Weld,” Blevins said.