The Culmination of a Year of Sports 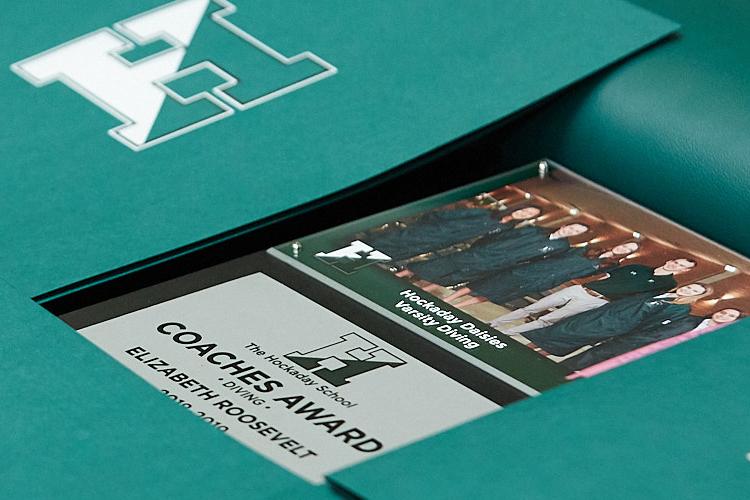 //PICTURED ABOVE: The winners of the awards received green folders with their award certificate inside. Elizabeth Roosevelt won the Coaches Award for Varsity Diving.

A blinding spotlight shines on Director of Athletics, Deb Surgi. Two screens enlarge her face as she opens up the annual Athletic Banquet in front of many eager athletes, coaches and parents. She wears black checkered pants with a matching black checkered coat. The banquet commences when she opens her mouth.

Varsity and Junior Varsity athletes gathered in Penson Athletic Center on Tuesday, May 7 at 6:00 for the Athletic Banquet. The banquet serves as an event for other students, coaches and parents to celebrate the achievements of Hockaday student athletes. Following the theme of changes in the athletic culture, the banquet also introduced many new traditions.

The banquet began with greetings from Surgi, followed by remarks from Dr. Karen Warren Coleman, Eugene McDermott Head of School, and finally words from Athletic Board Representative, Meredith Jones ‘19.

The celebration continued with the presentation of the New Captains, Most Valuable Player (MVP) Award, Coaches Award, and Split H Award, given to a Junior Varsity player. Surgi invited previous captains from each sport to come onto the stage to pass the torch to the next years captains. The captains ceremoniously gave their successors captain pins and flowers. As well, every coach or coaches from each sport—fall, winter, spring—was asked to come to the stage to present the M awards.

Under the leadership of La’Boris Bean and Rachel Grabow, Cross Country finished fifth in the Southwest Preparatory Conference (SPC) this year. Captains, Parker Hawk ‘19, Jenna Hofmann 19’ and Sophia Kim ‘19 left the team in the hands of Merritt McCaleb ‘20 and Lucy Young ‘20. Bean presented Kemper Lowry ‘21 with the Split H Award, Lena Mehendale ‘22 with the Coaches Award and Hawk with the MVP Award.

To conclude the fall sports, Varsity Volleyball coaches Andy Gass and Jenny Francuski helped their team to a fourth place title in SPC. Captains Maddie McBride ‘19 and Mia Weathersby ‘20 passed the team to Erica Hulsey ‘20 and Weathersby. Francuski presented Sara Mangelsdorf ‘21 with the Split H Award, McBride with the Coaches Award and Leilah Smith ‘20 with the MVP Award.

Spring Crew had a successful season, ending with their boat dedication “The Liza Lee.” Coaches Forteith, Misdom, Walker, and Kim Elting awarded Erin Hughes ‘21 with the Split H Award and Parker Waters ‘19 and Paige Halverson ‘19 with the Coaches Award and MVP Award, respectively.

Varsity Golf also had a prosperous season finishing fourth in SPC. Skaife capped off the season by awarding Julia Haetzle ‘22 the Coaches Award and Sarah Haetzel ‘19 the MVP Award. Next year’s golf captains will be Sarah Wright ‘21 and Doris Zhang ‘21.

Varsity Softball found success in their season, as well. Coaches Katlyn Shahrestani, David Stringfield and Victor Torres presented Trinity Naile ‘19 with the Coaches Award and Madison Stringfield ‘20 with the MVP Award. Naile and Stringfield left the pins and flowers with Stringfield and Kate Woodhouse ‘20.

Varsity Tennis had a victorious season. The team finished second in SPC with the help of coaches Carol Thumlert and Mitch Clark. Emma Car ‘19 and Morgan Lutz ‘19 said goodbye to the team and left their legacy with Ivy Becker ‘20 and Phoebe Knag ‘20. Thumlert awarded Sarah Youngberg with the Coaches Award and Carr with MVP.

Finishing with an eventful season, Varsity Track and Field finished sixth in SPC. Coaches Bean, AD Ebeniro, Fore, Anthony Mann and Robert Vaughan granted Katz with the Coaches Award and Finn with the MVP Award. Captains, Katz and Avery Bowers ‘19 handed over their titles to Hannah Taylor ‘20 and Kate Clark ‘21.

The ceremony continued with the attendees watching the captains’ video presentation and Surgi recognizing all seniors, All-SPC winners, All Zone winners, All-State and District Winners, Hockaday Athletes of the Week and three-sport varsity athletes.

To end the evening Surgi six seniors with prestigious awards. Adoette Vaughan ‘19 won the Joyce Rainwater Athletic Award, and Gum earned the Batterson Award for Sportsmanship. Jones accepted the Elizabeth Nan McGarr Spirit Award. Cohen and Katz both won the Heart and Hustle Award and Howard was presented with the Red Barr Award for Swimming. Upcoming Athletic Board representative, Margaret Woodberry ‘20 concluded the evening with her final remarks.

Overall, the Athletic Banquet was a success to all that came and Surgi enjoyed hosting her first banquet of many to come.

“A banquet is the culmination of a year, of hundreds of hours and minutes, details, conversations, competitions, wins and loses. As I said in my final remarks, I appreciate most importantly the students. This is why I’m in education, this is why we do what we do. So, to see everyone there, proud to recognize so many student athletes in diverse ways, that’s what sports is all about. So, I feel that I have loved every minute of this first year with you, I felt like I was home,” Surgi said.