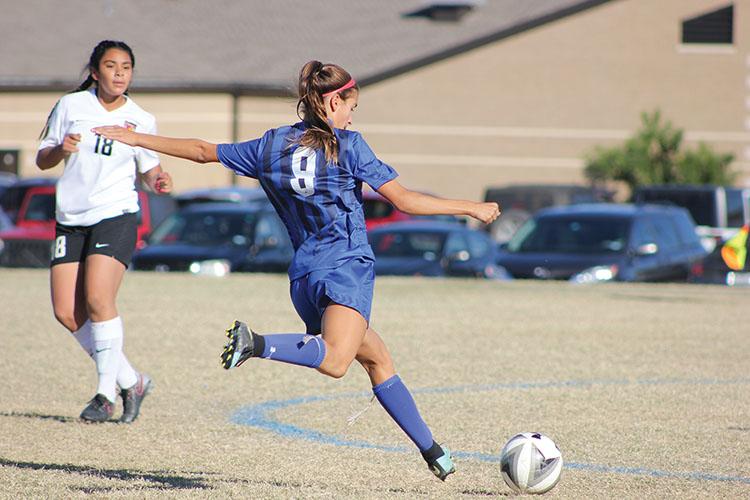 //PICTURED ABOVE: Leena Mehendale, Hockaday varsity soccer player and club athlete, plays with her club team, Sting. Mehendale juggles school work with four and half hours of club soccer a week, and with ten hours of Hockaday sports. Other Hockaday Athletes, such as Estelle Fisher and Fiona Chen, also balance their school work and various club sports.

At Hockaday, many students participate in club sports, which takes a great amount of time away from their schoolwork and free time. Some athletes who play both school and club sports have voiced their opinion in making the last period at the end of each day the designated time for school practices, as many other public schools in the Dallas area do. However, Hockaday developed its own way of accommodating the lives of busy competitors.

Many of the athletes use Hockaday’s Alternate Athletics Program to aid them in completing all of their school requirements and find time to relax.

Hockaday Alternate Athletics is a resource that allows athletes who participate in club sports at a high level to be exempt from physical education classes and to be given a study hall instead. For Middle School athletes, the required number of hours of physical activity is 12 hours, while Upper School students are only required to complete 10.

Coach Jennifer Johnson, Assistant Director of Athletics, is in charge of managing the 50-60 applications every year.

Upon receiving the forms, Johnson must contact every athlete’s coach and confirm their participation in physical education for the required number of hours.

Usually, approving all of the forms takes Coach Johnson between two and three weeks, due to the varying response times of the coaches.

Some athletes find Alternate Athletics as valuable time to do their homework and study, while others find the exemption from physical education as a break from physical activity.

Although Alternate Athletics may help with managing the school work of a student athlete, sleep is a crucial aspect for any teenager, especially for those who participate in regular physical activity.

Research suggests that teenagers should be sleeping for nine to nine and a half hours every night. However, the average teen in America receives approximately seven hours of sleep each night.

Mehendale acknowledges this fact, “Even though it may feel like there’s always more to do, sleep is very important,” Mehendale said.

One Hockaday athlete who has taken full advantage of the Alternate Athletics program to provide her more study, sleep, and free time, is freshman gymnast, Fiona Chen, who has been practicing gymnastics for over ten years.

“I enjoy gymnastics because I have a lot of friends who I have gotten really close with, as well as the coaches; we’ve been through a lot,” Chen said.

While she loves gymnastics, Chen sometimes has difficulty juggling her schoolwork, social life and sport, as any busy student athlete would. Because she participates in 23 to 24 hours of gymnastics each week, Fiona must leave school early, to make it possible for her to arrive at her gym by 4 p.m. when practice starts. In order to accommodate her schedule, she has D Period free.

Chen is not the only athlete at Hockaday to have a special schedule. Sophomore swimmer, Estelle Fisher, also uses this accommodation because she swims in the long distance competitions, which usually take place in the morning hours of swim meets.

Throughout the year, Fisher also has a very busy schedule. Typically throughout the school year, her competitive swim team, the Dallas Mustangs, practices around 15 hours a week. However, when it is time for school sports, combining both of her practices, Fisher usually practices 20 hours per week. In the summer, her schedule picks up, and she practices five hours every day.

Fisher finds doing as much work as possible at school the best way to manage her time. Due to the possible change of pool locations for her practices, her commute time often varies, and she can never definitively know where she will be training on any given day.

Fisher has a goal of swimming in college, making her practice time crucial. She also values her time to complete school work, which she credits Alternate Athletics for helping her with.

“If I didn’t have [physical education] exemption, I do not know how I would get any homework done,” Fisher said.

While the dedicated athletes have had difficulties managing their busy lives, they still love their sport and are dedicated to being their best. Tolerating the intense schedule is worth the outcome.

“I love the team atmosphere; I love the people on the team, and I just love the feeling of swimming”, Fisher said.

Athletics is one of the founding cornerstones at Hockaday, and has continuously appeared in current life on campus. In order to keep Hockaday’s students interested in pursuing sports, Alternate Athletics provides a cushion of support for their time.

Without this program, many student athletes may struggle in their pursuit of time, to balance their life inside and outside of school.