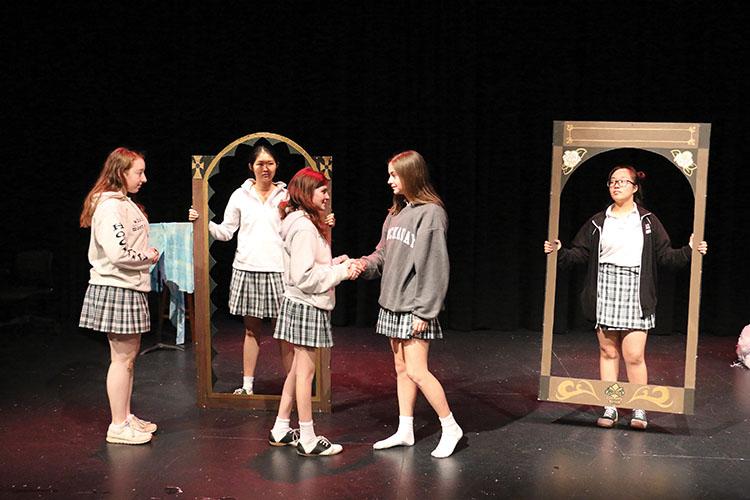 //PICTURED ABOVE: Hockaday drama students rehearse during class. They will be waiting to hear if any are one of the lucky students to go to Scotland.

“I listened to it, and I let out a very strange strangled squeak,” Gray said. “My children said ‘mama, what’s wrong’ and I was like ‘nothing’s wrong, it’s wonderful, oh my gosh oh my gosh.”

However, during that time, the drama department was busy working on the musical, so Gray did not tell anyone besides Performing Arts Chair Beth

“I couldn’t tell anyone else because it would take focus away from what we were working on,” Gray said. “So that was absolutely crippling. I hate waiting; I really, really wanted to tell everyone. Later when we decided to let everybody know in an email, everyone immediately got excited about it.”

Each year, the AHSTF Board of Advisors reviews all applications and chooses the top high schools by analyzing each drama program and its achievements. Hundreds of schools apply annually to take part in the festival, but only 15 are chosen to attend. The chosen schools select a group of students of 10-14 actors and one to four student technicians to attend the festival.

Current freshmen and sophomores auditioned on May sixth and seventh by memorizing monologues and running scenes together. They will be selected based on their auditions, a letter they wrote explaining their desire to attend the program and discussions among the fine arts staff. Once selected, the 10-12 person company will begin workshopping together in preparation for their trip.

In August of 2020, the students will begin the trip by flying to London for a one-to-three-day stay. In London, they will visit the Shakespeare Globe Theatre and attend other tourist day trips, including different West End Shows. The whole trip will last for two weeks.

Following their stay in London, students will continue on to Edinburgh by train where the festival will take place. They will stay in the University of Edinburgh dorm rooms.

The company will also be able to witness the Royal Edinburgh Military Tattoo, military and cultural acts with the British Army which take place every year on the Edinburgh Castle Esplanade.

The American High School Theatre Festival is part of the larger Fringe Festival in which professional actors from all around the world come to perform. The whole city of Edinburgh will be transformed into a center of dramas and performances.

The Hockaday students will see both the student theatre shows and the professional performances in Edinburgh.

All of the groups at the festival promote their own shows in the streets by handing out fliers and launching publicity stunts. The publicized shows will be performed all throughout the city, on larger public stages and in the corners of small shops, although the majority of the festival is in the middle of the city.

Although Hockaday has never been invited to the festival before, Gray has talked about it to other teachers. She had the opportunity to participate in the festival as a young actor in college and then again as a young professional actor.

“This is one of the most unique and amazing learning experiences I ever had, and I would like our students to have that opportunity too,” Gray said.

Gray plans on working with the students extensively to test their dramatic ability and potential to work with other actors. Part of the criteria for the selected group includes being a mindful ambassador of the school. Gray commented that she wants girls who will represent the talent Hockaday holds in the arts as well as the school itself.

Several Hockaday drama performers are not only excited for the opportunity to travel but also for the chance to bond with all their theater friends. Freshman Madeline Sumrow is auditioning and is looking forward to the possibility of getting in.

“It would be a fun experience and culturally enriching,” Sumrow said.

In the case of tech crew, Gray will choose one to four technicians to support the cast. They will likely not be part of design or build, but rather be experienced in the sound, light, props and costume department.

Sophomore Joy Hu, who is in charge of rigging and sound for tech crew, is looking forward to the chance to go to a new place and perform new things in a different environment.

“Because you’re traveling, it restricts how much you can bring and what you can do, so it’ll be interesting to work around that,” Hu said.

Furthermore, Gray is considering bringing a student-written piece to take to the festival.

“I would love to take a student’s original piece because that would really show the things that we can do and all of Hockaday’s talent and potential,” Gray said.

After the festival is over, the students will fly back to London and then back to the states. “It’s going to be a full-on busy, busy two weeks,” Gray said.