Don’t Go Hustling to The Hustle 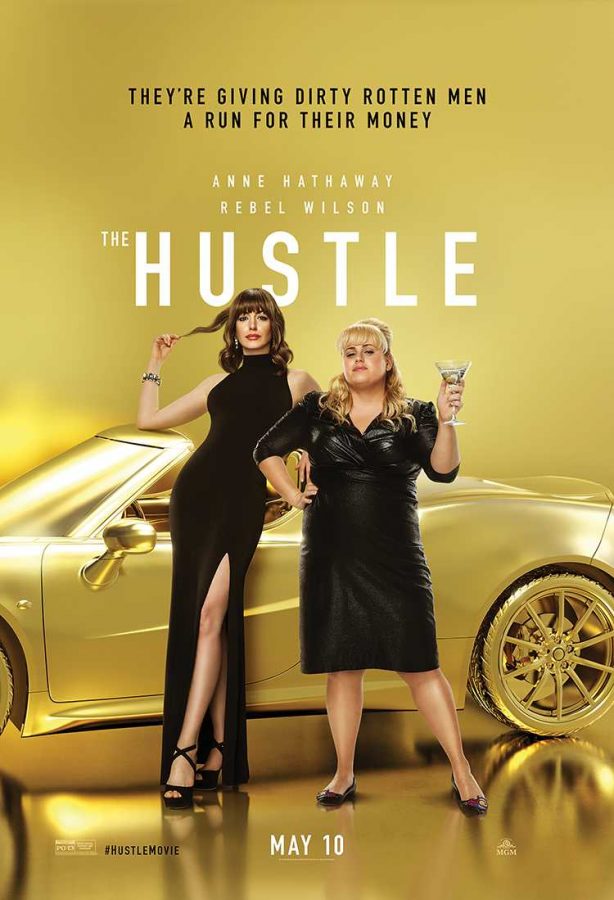 Standing in front of Studio Movie Grill, I was torn between watching “Avengers: Endgame” and “The Hustle.” A die-hard Marvel fan, I wanted to enjoy the end of the renowned Marvel Saga; however, being the good Fourcast staff member that I am, I walked into “The Hustle,” as I was assigned to. The theater that greeted me with a flamboyant poster shimmering with gold, reflected just the opposite of the glory that this film deserves.

“The Hustle,” a remake of the movie “Dirty Rotten Scoundrels” (1988) and “Bedtime Story” (1964) but with female leads, presents a comedy with two stars, Anne Hathaway as Josephine Chesterfield and Rebel Wilson as Penny Rust. They played con-artists competing to deceive a naive millionaire. However, this rivalry meets an unexpected end.

First, I want to address the best part of this movie: the architecture of Chesterfield’s house. I adored the modern and minimalistic style villa, with its clean white facades contrasting harmoniously against the vivid colors of the Southern French ocean and the fresh green turf in her yard.

The rest of the movie, however, was a major disappointment. At the beginning of the movie, Rust states her motives behind being a con artist: to exploit men in a patriarchal society as an act of revenge. Additionally, Chesterfield seduces men by appealing to their heroic nature with a damsel-in-distress type vulnerability. “The Hustle” first appears to have somewhat of a feminist agenda, criticizing the patriarchal hierarchy in society. However, the two con-artists ironically call each other horribly sexist and objectifying terms. Also, the two women fight for the attention of one man, Thomas Westerburg, and eventually get manipulated by him, completely deviating from their original purposes of female solidarity. I may be missing the irony here, but after considering the feminist purpose of this movie, it felt inappropriate.

Interestingly, Wilson revealed that she had to defend this movie to receive a PG-13 rating from an R in an interview with Yahoo. She found it quite sexist that while the original movie, “Dirty Rotten Scoundrels,” was rated PG but the reboot was rated R, restricting younger audiences from watching it. Although this is a valid claim and I personally believe an R rating may be harsh, she contradicts her complaints of sexism with a movie full of stereotypes.

Also, Wilson’s character’s most pronounced trait was obesity; she repeatedly made obnoxious “fat jokes” that were heavily based on stereotypes that only left a frown on my face. Poorly delivered jokes—or not delivered at all due to such terrible execution done by Wilson—and her irritating way of speech only made me cringe inside. Instead of finding humor in something actually funny, Wilson’s comedy relies solely on her only notable distinction, her weight.

When I first researched “The Hustle” so that I could be an educated viewer, many sources stated that this was a comedy. However, I seldom laughed during the 94 minutes of run time; it was simply not funny. The execution and utilization of such stereotypes to be comedic were simply beyond my belief.

Besides, the entire plot of the movie was unrealistic: if an annoying stranger suddenly sat in front of you, French fine dining in hand, and started rambling on about her tragic life story, would you be moved and gladly offer her money? No. While the two con-artists revealed that they exploit men with seduction and vulnerability, this degree of vulnerability seems forced and absurd.

Finally, the plot simply lacked substance. The film spends about 40 minutes for the buildup to the actual plot, dragging out the storyline. Movies are a way for one to escape reality and indirectly experience fictional drama and comedy. They are NOT created for viewers to spend $11 on a ticket to watch bland, offensive characters. I do acknowledge the director’s intention to emphasize the only plot twist in the film, but in reality, the climax was at most mediocre.

Personally, I left the theater dumbfounded by everything about “The Hustle.” Unfortunately, due to the word count limit on this story, I have to wrap this up. Throwing money into the fire pit or off a cliff would be a better way to spend your hard earned cash than going to watch this abomination. I would never seriously endorse breaking the law, but this movie is not worth your money — just pirate it if you must watch it. “The Hustle” might have attempted to be a lighthearted comedy, but after forced jokes, obnoxious slapsticks and stereotypes, nothing could save this dreadful film, not even Anne Hathaway.