Risk it for the Biscuit (Bar) 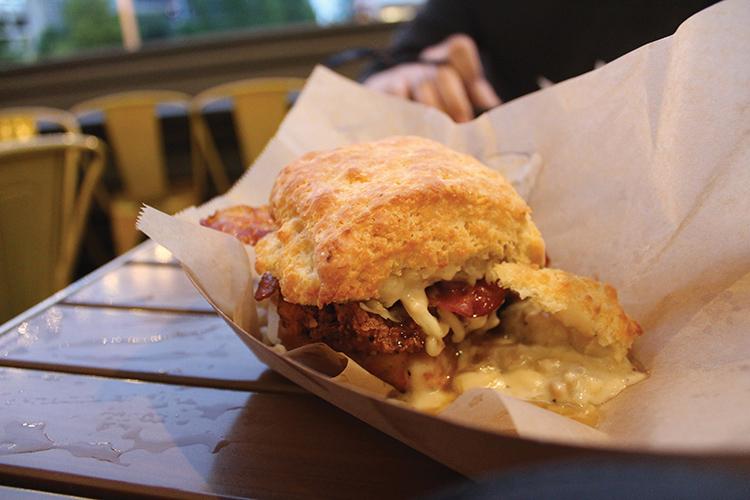 One of the many establishments lined up along the Boardwalk at Granite Park in Frisco, The Biscuit Bar, a casual restaurant, overlooks a small lake and features many lounge areas and patios.

When we arrived at around one p.m. on a Sunday, the Boardwalk was already bustling with people. As I looked around at the different restaurants filled with people, I was attracted to the Biscuit Bar’s bright yellow and white color scheme. It was already packed, as people had filled the large outdoor space, and more were standing in the line extending out the door.

As I waited in line, I could see employees making biscuits, kneading out the dough and filling out trays with them. Three full carts of golden, fluffy-looking biscuits sat against their white tiled wall, and bags of flour lined the shelves.

A large menu hung on the wall, comprising 21 different options, from a Hot Chocolate Biscuit to a Buffalo Blue Chicken Biscuit. Salads, customizable tater tots, and desserts wrapped up the many choices.

I ordered the Monte Cristo —a French toast biscuit filled with ham, smoked turkey, jack cheese and strawberry jam— although it was not my first choice. Before coming to the restaurant, I set my eye on the Steak and Egg on a Biscuit, but they were unfortunately out of steak by the time we arrived. We also ordered a classic Bacon Egg and Cheese Biscuit, a Grilled Chicken Biscuit and a Hot Chocolate Biscuit.

Surprisingly, our food arrived within ten minutes, despite the hustle and bustle of eaters filing in and out the door.

The Monte Cristo was delicious; the fluffy, golden biscuit complemented the ham and turkey extremely well and the melted cheese paired perfectly with the meats. I was especially satisfied with the warm and soft, yet crunchy-on-the-outside biscuit itself.

The strawberry jam intrigued me the most. Usually, I would never put strawberry jam next to cheese and meat, but sandwich. It gave a burst of unexpected sweetness to complement the saltiness of the meat and cheese.

I will say that there was a downside to this biscuit: it was very hard to eat and messy. As soon as I picked it up, my hands were already sticky with strawberry jam. After a few minutes, the bottom of the biscuit became a bit soggy, which was fine because it ended up tasting like a pancake.

Next, the Bacon Egg and Grilled Chicken Biscuits were very delicious; all the ingredients meshed together well. The Bacon Egg and Cheese Biscuit was very creamy because of the egg and cheese, while the crunchy bacon added flavor to the whole dish. The Grilled Chicken’s vegetables and chicken worked well together because the chicken was tender and various veggies complemented it well.

Finally, we finished off the meal with the Hot Chocolate Biscuit – their signature golden biscuit topped with chocolate gravy and toasted marshmallow fluff. It looked very appealing and tasted amazing when the biscuit combined with chocolate and marshmallow, almost melting in my mouth.

However, I do have to admit that although I felt extremely full afterward, an hour later, I was already hungry. It was more like a snack to me than an actual lunch, so if you plan on making a trip here, try to order enough to leave you satisfied until your next meal.

The Biscuit Bar is located in Plano, around Legacy West, so it took me about thirty minutes to get there from where I live. But Dallasites, don’t fret— a new location is opening at Highland Park, near SMU this year!

The Biscuit Bar offers a fun and casual environment while serving delicious food. If you’re looking for a good place to hang out with friends or just enjoy an afternoon snack, make sure to come here. Their signature biscuits and menu lived up to the hype, and I know that I will be back for more.

Story and photos by Julia Luo