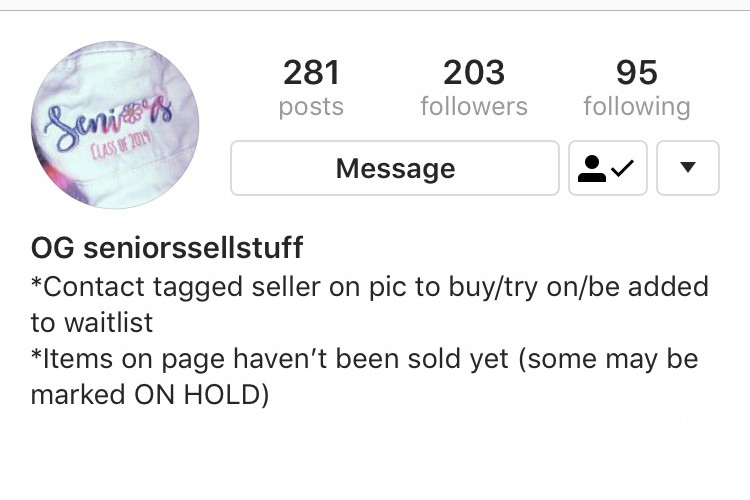 //PICTURED ABOVE: The seniors sell stuff account on Instagram has quickly gone up the ranks and gained a large following of Hockaday students. Whether they follow the account to sell, buy or look at clothes (or just out of curiosity), many can agree that this account has helped create connections across the Upper School.

As the graduating seniors begin to clean up their closets and prepare to move into college, many are having to channel their inner Marie Kondos: with extra clothes on hand and a desire to earn cash before college, seniors are trading, selling or donating unworn or slightly used clothes.

Senior Sophia Kim decided to design a platform where she and other seniors alike could buy or trade clothes while simultaneously earning cash: she created an Instagram account to advertise and clothing items from seniors to anyone willing to buy them. While this account has no direct affiliation with Hockaday, it has quickly become a way for seniors and underclassmen to bond.

“Before I go to college, I really wanted to find a way to earn money, but at the same time I wanted to redefine my own wardrobe. One day, the idea to make a joint account just hit me, so I asked other seniors for their opinions and everyone was on board,” Kim said.

The seniors’ response to creating the count was overwhelmingly a positive one; immediately, about ten girls started selling their own items on the account and it gained popularity around the Hockaday Upper School.

Senior Sawyer Bannister was one of the first sellers on the account, posting pictures of her clothing that she wants to sell or featuring ‘highlights’ of items on hold or sold. She was very enthusiastic about the creation of the account because not only did it provide many seniors with some pocket money, but it bonded their class before graduation.

“ I think this account is a great idea because it promotes entrepreneurship and it is an opportunity for all the seniors to make some money before college. It has definitely bonded out class,” Bannister said.

Bannister, Kim and other sellers have a group chat where they decide ways to improve the account. For example, after a few days the Instagram account became private, limiting its following mainly to members of the Hockaday community.

“Since we started the account, it’s been a great ‘last hurrah’ type thing for our class, I think. Everyone is talking to each other and negotiating about clothes, and it’s really cool seeing the connections which an account I made to make money has made,” Kim said.

Sophomore Elizabeth Roosevelt followed the account shortly after its creation and has two items placed on hold. She admires the business aspect behind the account and also thinks it’s a fun way for the seniors to make connections within their own class, but also across the entire Upper School.

“I first found the account when they requested to follow me on Instagram. I thought it was a super fun idea and a good way to buy clothes on a budget, so I immediately followed it,” Roosevelt said. “Even though I am not a senior, I think having a shared account is a great way for them to bond and even meet new people.”

The account currently has over 200 followers and many students have purchased and sold clothes from it. It created a fun, fashion-heavy environment amongst the seniors prior to graduation (and a great way to recycle the seemingly-endless graduation party outfits).

“If you walk into the senior commons during any time of the day, it looks like a store. There are clothes hanging everywhere and people are trying stuff on— it’s really fun because it’s like a mini fashion show when people are decided whether or not to buy the clothes,” Bannister said.

Story and image by Eliana Goodman