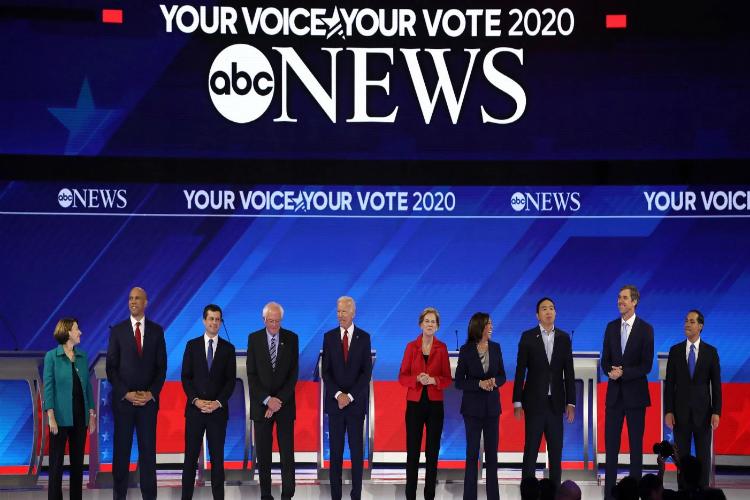 Though the 2020 election may seem far away, the process of the election is quickly speeding up. Three Democratic debates have already passed and the fourth is set for Oct. 15.

To qualify for the third Democratic debate, a candidate must have cleared two thresholds: hit 2 percent or more in polls conducted in June through August; and receive donations from 130,000 people, with at least 400 donors each in at least 20 states. History teacher Kristen Blevins said these qualifications could have been influenced by backlash against the Democratic Party in the 2016 elections.

“There were accusations that the party really favored Hillary as the establishment favorite and that they didn’t see Bernie having the support of a large variety of people as being as relevant,” Blevins said.

The current qualifications mean a candidate must have donations from a certain number of donors, which theoretically benefits candidates supported by grassroots movements as opposed to only those with wealthy donors.

Requirements for the third debate cut the field from 20 who qualified for the first two debates to 10. Five candidates, Eric Slawell, John Hickenlooper, Jay Inslee, Seth Moulton and Kirsten Gillibrand, dropped out of the race during July and August, citing these tougher qualifications.

Some of these candidates may have suffered from a lack of political experience on the national stage. Junior Ann Herring, co-president of the Young Democrats club, said candidates without a strong background in politics are unlikely to be successful in the presidential race.

History teacher Kristen Blevins agreed qualifying for the debates is crucial in the presidential race.

“At this point, especially if a candidate did not make the third debate and is not qualifying for the fourth, I imagine that the candidates and the campaigns are needing to consider if they should stay in the race,” Blevins said.

The Oct. 15 debate may extend to a second night, depending on how many candidates qualify. Candidates will have more time to meet the same qualifications they had to meet for the third debate. So far, the 10 candidates from the third debate have all qualified, as well as billionaire activist Tom Steyer, who will make his Democratic race debut in this fourth debate.

As of Sept. 13, The New York Times reported the top candidates in the polls, from first to sixth, as Joe Biden, Bernie Sanders, Elizabeth Warren, Kamala Harris, Pete Buttigieg and Beto O’Rourke.

While critics were largely positive about the second debate, praising civil debate and a lack of outright attacks between the candidates, the third debate was more contentious. Analysts also question which candidate could be a clear contender to Trump.

“It is useful for Democrats to look at the candidates and identify policy differences because these are televised, but if the candidates aren’t also making the argument of ‘why me’ or ‘why us’ instead of Trump, it seems like they’re almost wasting an opportunity with that,” Blevins said.

“I think one of the biggest jobs of the president is the ability to think on their feet and make the right decisions on their feet,” Herring said, “and the debates give them a place where we can hear what they have to say candidly, which is part of that they will have to do if they become president.”