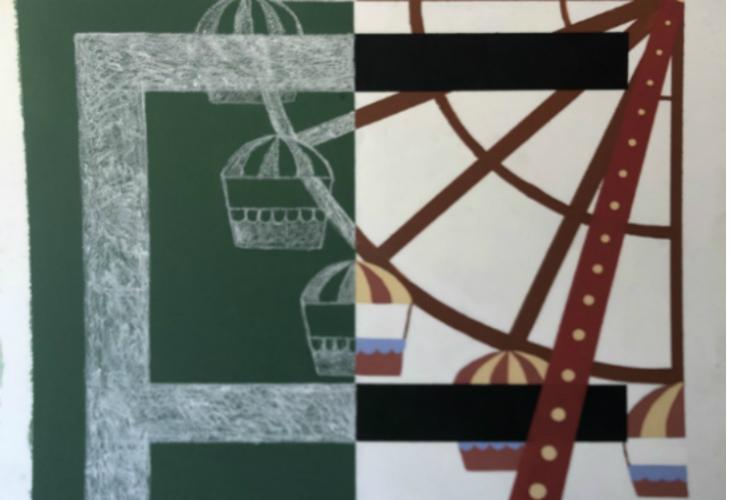 //PICTURED ABOVE: A smaller draft of one of the panels that will go up in the center.

Organizations including After8toEducate and Fannie C. Harris have been remodeling an old elementary school in Dallas into a youth homeless shelter for DISD students. The center hopes to open its services to students in the upcoming months. The renovations include putting up panels that label each room in the shelter. Junior Kylee Hong, along with other students from Hockaday and Thomas Jefferson High School, volunteered to make and install these panels.

Hockaday students became involved with building the shelter in 2018. Five of them, along with another five students from Thomas Jefferson High School, worked on designs for both the kids’ bedrooms and the center’s library. The same organization they worked with to create these designs reached out this summer because they needed volunteers to create art for the building.

“We wanted to create art for the space instead of just having signs that say this is room A, B, C, because that would be really institutional,” Hong said.

Each panel will include a letter to label the rooms, but will additionally have a picture that corresponds with the letter. For example, the room labeled ‘F’ will picture a Ferris wheel. A fraction of the panel will also be designed as a chalkboard to reference the history of the former elementary school.

Hockaday junior Maddie Fisher said she hopes the artwork on the panels will help create an environment that makes kids more likely to come to the shelter.

“When we were designing the rooms, we were trying to make it so that people would actually want to come because a big issue was the stigma around homeless shelters,”  Fisher said.

To complete the project of building and installing the panels, the Hockaday student volunteers began meeting on Wednesdays and Thursdays in early August. Now that school has begun, they work after school on Wednesdays in the Upper School Art Studio, but Hong said she hoped to add more weekends to their schedule. This would allow students with extra-curricular activities during the week to get involved as well.

Laura Day, Executive Director for the Institute for Social Impact, said she loves that students and youth have a role in the project.

Once the shelter opens, it will help address the growing problem of homelessness in Dallas. Hong and her fellow volunteers hope that through the art they are working to create, more youths than ever will feel welcome to use the center as a shelter.

The goal, Day said, is for the center to provide, “stability, peace and consistency.”