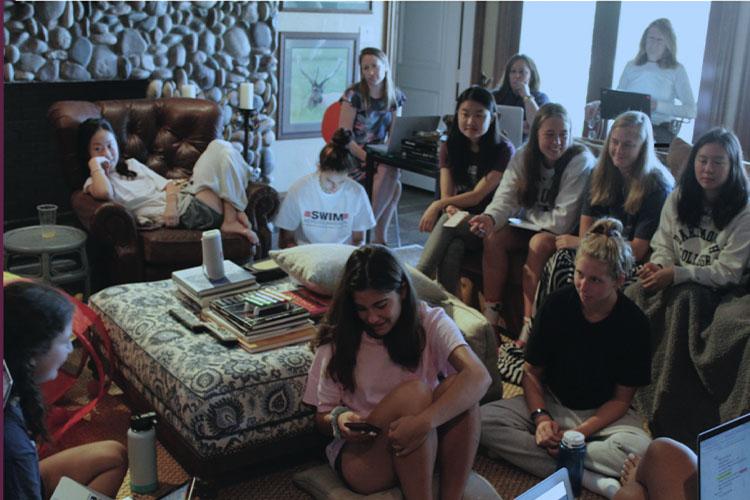 //PICTURED ABOVE: Executive Student Council officers gather at a lake house in East Texas on Aug. 24 to discuss their new ideas and bond.

This page will provide all students with information from student council and make what they do in meetings more accessible to the student body.

“We wanted to implement this to facilitate direct communication between students and the council,” Naidu said. “It also ties into our theme of ‘connection’ for the year.”

The on-line Student Council page has already been created, and other goals are expected to come to fruition by the end of the quarter. For example, each board will have its own page with an anonymous survey link where students can provide feedback about something they want to be changed in the Upper School.

Sophomore Allison Yang said she thinks the changes will be useful.

“I think it’s great that Student Council is giving us information through OnCampus because it’s nice to have everything going on all in one place,” Yang said.

Further tying in the theme of connection between Student Council and the students is the plan to hold open meetings, during which students could take part in seeing what takes place during meetings.

Although previous Student Council meetings were not officially “closed,” they were held in locations and at times which would make them difficult for students to attend. Jason Goldstein, English teacher and an Upper School Student Council sponsor, said he supports the move toward accessibility.

“Governing bodies work best when their proceedings are transparent, and the community takes an active role in shaping their agendas,” Goldstein said.

Details for the open meetings are still to be determined, but Student Council officers said they would announce procedures as soon as possible.

“I think some of my friends and I would be interested in seeing what goes on in the meetings,” Yang said, “because it can be nice to feel more involved when it comes to planning events.”