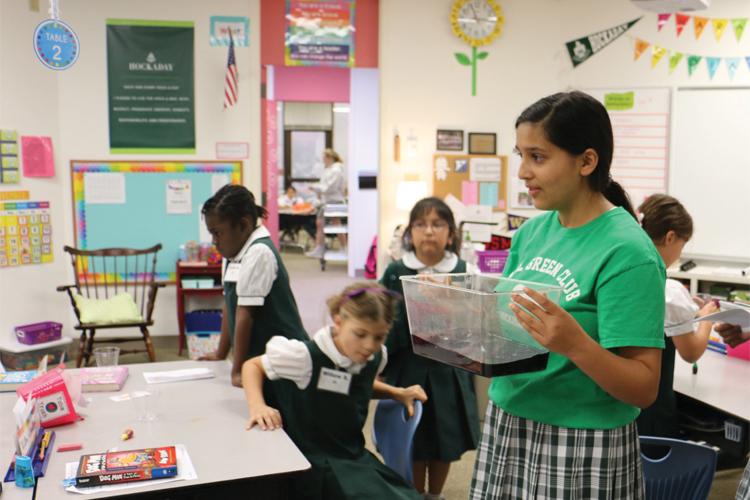 High school students’ lives are filled with soft drink cans and plastic straws. What they often don’t consider is the destruction these products bring to the environment. To combat these effects, programs at all Hockaday grade levels are working to spread awareness and promote change.

One of these programs is the Form II recycling program. Once a week during advisory, a rotating group of sophomores collects recycling from classrooms. Form II Dean Jordan Innerarity said he is proud to be a part of this program.

“It’s nice to know that Form II is making a significant impact on the Hockaday community,” Innerarity said.

The recycling program not only keeps waste out of landfills but also saves Hockaday maintenance hours of work. In recent years, however, students and faculty have been mixing waste with recycling, so current sophomores must check for waste before collecting the recycling.

For example, items that should be recycled, such as clean cardboard boxes and blank paper, can’t be if they are contaminated with waste like pizza grease or spilled soda.

“A lot of companies will throw out objects that should be recycled if there is too much trash mixed with the recycling,” Innerarity said. “Hockaday has given the community the infrastructure to recycling. We need to educate each member of the community about what objects can and can’t be recycled.”

Besides the recycling program, students in the All Green Club work to educate people about ways to help the environment through the All Green Club. The club began in 2017 when current seniors Riyana Daulat and Karen Lin wanted another way to effect change.

“I think it is so important that we get younger kids involved because they’re also going to be living in this world,” Daulat said.

“Promoting awareness, empowering them to know that they can make a difference, too, is really important,” Daulat said.

In addition to educating young students, the club has succeeded in getting recycling bins in the fitness center and organizing Hockaday’s first Earth Week, which included a lights-free advisory period, a bake sale supporting the Trinity River Audubon Center and an educational Kahoot game.

“[Earth week] was definitely a really amazing thing that I’m glad we could get the upper school involved in,” Daulat said.

Also educating students about the environment is pre-kindergarten and second-grade science teacher Lara Guerra. Two years ago, she began a recurring two-year program of planting sorghum, or “broom corn” with fourth graders. Last fall, they harvested the seed heads and hung them to dry; in the spring they will wrap the seed heads around a dowel to make their own brooms.

“I hope that by getting them out, getting their hands in the dirt, marveling over a bug or watching a bird, [those activities] plant an interest,” Guerra said. “It’s hope for tomorrow.”

The project ties into their social studies work on pioneers and their science classes, in which they learn how a seed turns into a plant. The project also aims to promote awareness and appreciation for our environment.

“If we even hope to have a shred of the earth left, we need to teach our young children ways to tread lightly,” Guerra said. “I think that you just have to pass it on or there is no hope for the future.”