We’ve Got Spirit… Do You? 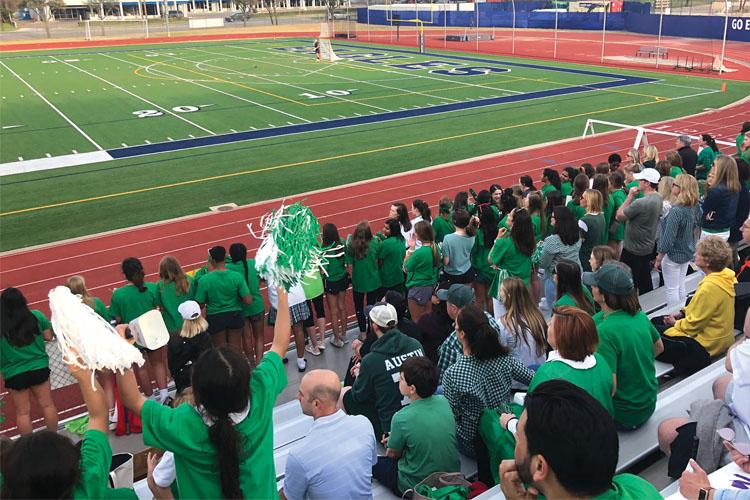 Most Friday nights of the school year, Hockaday girls flock to 10600 Preston Road, clad in blue and gold apparel and eager to cheer on the athletes of their brother school.

Three miles away from the Lion’s Den, their classmates can be found competing on their home turf—on the fields, in the pool, or on the court— with only a handful of teachers, students and parents present to cheer them on from the bleachers.

Athletic Board Chair Margaret Woodberry recognizes the root of the problem that she is working to change in the coming year.

“It is difficult for Hockaday to mimic the ‘Friday Night Lights’ football game atmosphere that is such a large part of Texas culture,” Woodberry said. “There are social and cultural aspects to a St. Mark’s football game that a Tuesday night volleyball game, for example, cannot provide. This is something we are working to improve.”

Reinstituting a culture of spirit, especially in a school with such a large emphasis on athletics, has been a focus of Hockaday’s Athletic Board and athletic department in recent years. Acknowledging what has worked in the past, Woodberry and the Athletic Board have begun brainstorming ways to generate excitement about athletics.

“Last year something that worked really well were our Lower School and faculty spirit nights,” Woodberry said. “People may have come for the T-shirts or the free food, but getting people there in the first place is the hardest part. It was really special for athletes to have their hard work recognized and supported by such a large crowd.”

Upper School math teacher Karen Sanchez has been involved in promoting the spirit of athletics since 2014, when she became the faculty sponsor for the Athletic Board. Throughout her time at Hockaday, the Athletic Board has accomplished a significant amount of progress, but the spirit rallies have been unique in their ability to unite Lower School, Middle School, Upper School and faculty through sports.

“It’s nice that these spirit nights can make [athletic events] into a community thing,” Sanchez said. “People obviously love sports, but when you are surrounded by teachers or friends that you know, it makes going to games much more fun.”

While measures are being taken within the Hockaday community to increase turnout at athletic events, efforts have also been made at St. Mark’s to generate the same support for Hockaday athletes and performers that students have shown St. Mark’s teams.

For years, senior St. Mark’s students have been chosen to serve as Super Fan Men and promote school spirit. But unlike Super Fan Men in the past, Evangelist and Trahan have surpassed their duties in their efforts to bridge the gap between Hockaday and St. Mark’s athletics.

“What we are doing right now will hopefully be the beginning of something special between our two schools,” Evangelist said. “We want to bring our communities together in the spirit of athletics. We take for granted the unwavering support and love that the Hockaday girls show our sports teams, and I think it’s time for us to finally return the favor.”

Evangelist said he hopes to be a part of the class that can positively impact the relationship between Hockaday and St. Mark’s from an athletics standpoint.

“I want to change the narrative of the Super Fan Man,” Evangelist said. “It’s not just about St. Mark’s sports, because without Hockaday’s support, we would not be able to accomplish our goals. Jack and I need to lead by example.”