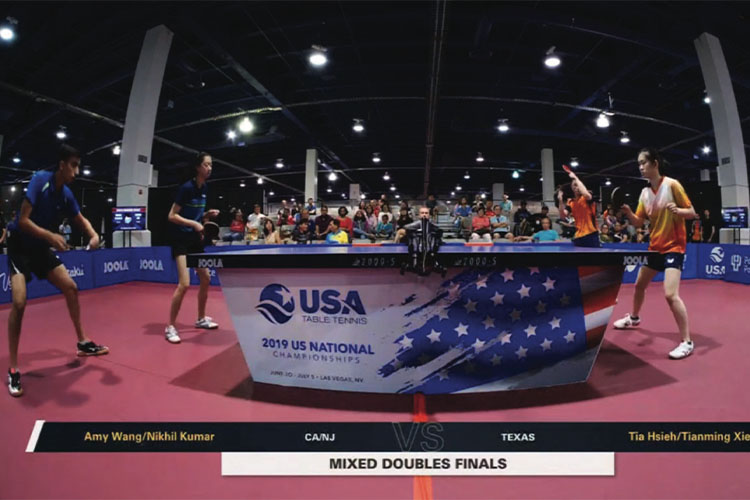 During the summer, Hockaday junior Tia Hsieh, and St. Mark’s senior Tianming “Tex” Xie, competed in the Adults Mixed Doubles competition at the 2019 US Nationals in Las Vegas for table tennis. Despite being seeded last for the event, the duo proceeded to make it all the way to the final round before falling to the number three seed.

After a strong showing at the 2019 US National Table Tennis Championships, Hsieh and Xie earned a silver medal in the Adults Mixed Doubles competition.

Hsieh initially took on table tennis as a way to pass time at her after school daycare. Soon after she began to enjoy the game, Hsieh started to practice at QD Academy’s Table Tennis Club in Plano where she met her current partner, Tex Xie. Now, after years of training, Hsieh still dedicates 25 hours of her week to train during the school year, and 34 hours per week during the summer.

Xie began training in table tennis at age 5 and said he has never become bored of it. After the work of high school amped up, he decreased his practice time to four hours per week.

“It’s not enough to improve, but it’s enough to maintain my level,” Xie said.

Two weeks before the tournament, the two players communicated and decided to be partners for the Adult Mixed Doubles competition.

“We initially registered with the mentality of a warm-up game,” Hsieh said.

However, the results of the tournament would suggest otherwise.

In the semifinals, Hsieh and Xie defeated the first seed doubles pair — former Chinese National Team member, Zhou Xin, and five-time women’s singles national champion and two-time Olympian Lily Zhang. After winning a close first game 1-4 in deuce, and being down 1-6 in the second game, the partners set goals for their next round.

“We focused on setting up a strong third-ball attack and hard forehand counters deep into their backhand,” Xie said.

The pair then proceeded to win the game with a final score of 3-0.

In the live-streamed finals, after executing upset after upset, Hsieh and Xie lost to third seed and current Pan-American junior mixed doubles champions Nikhil Kumar and Amy Wang. The two players won a close first game and came back from a score of 1-7 in the second game. After a long series of close games, the pair eventually fell to their opponent, ending the game with a score of 2-3.

“Nationals have been a very valuable experience to me because I am able to see myself grow stronger mentally each time,” Hsieh said.

“Our ability to play mixed doubles and win silver at Nationals may exemplify the bond between brother and sister schools,” Hsieh said.