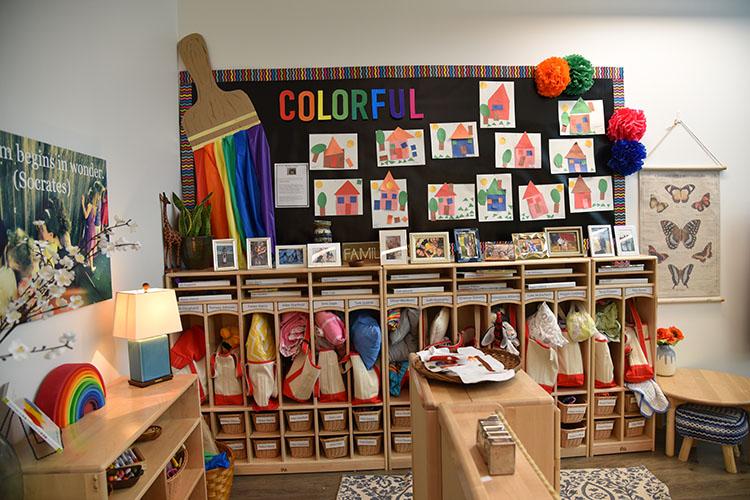 //PICTURED ABOVE: After 18 months of construction, the Ann Graves Child Development Center opened on July 1. The CDC serves in total 54 children, mostly children of Hockaday employees. The state-of-the-art facilities support children while their parents are at work.

Gone are the days of portable trailers in the field outside Upper School classrooms or next to the Boarding Department. After extensive planning involving the Board of Trustees, administration and center staff, the first brick-and-mortar Child Development Center at Hockaday opened its doors on July 1 to welcome 54 children for the 2019-2020 school year.

The building offers new features for both staff and children, whose ages range from six weeks to preschool.

The amenities include a sick room, six classrooms, two play yards and a large fish tank in the lobby where students can sit for storytime or wait before school. The building was named after Hockaday grandparent Ann Graves, grandmother to Catherine Dedman ‘19 and Nancy Dedman ‘21.

Angel Duncan, director of the Child Development Center since its opening in 1998, said she appreciates the new building for its ability to accommodate staff ideas that were previously unattainable.

“We’re still our consistent, warm, caring, small community with great goals for the children and the intention of teaching the children,” Duncan said. “We can just do it in a space that equals the quality of care we offer.”

The space, which totals about 10,000 square feet including the turf play yards, can fit nearly double the number of children as its old location could.

Enrollment numbers have increased from 37 to 54, with room to spare for 10 more students. This new number is especially important to Duncan, as the Child Development Center can now fit children it previously could not accommodate.

“I think the Child Development Center is wonderful, and I think it’s especially nice going from the trailers to this,” Hubbard said. “There are a lot of good teachers, and I think they deserve to have a really nice place to work.”

New facilities for the 14 staff members include a staff conference room, a break and workroom and a laundry room, all of which are fully equipped to meet the staff’s needs.

Last year, the Child Development Center inspired two Form IV students, Kathleen Roberts and Mia Weathersby, to begin a community service club in which Upper School students read, play and do crafts with the children. With the addition of the new building, club co-chair Roberts has even more plans for the new school year.

“We’re thinking of doing some projects to go up in the hallways of both the CDC building and the Upper School,” Roberts said. “We love showcasing the relationships formed between the high school students and their new friends at the Child Development Center.”

With the new building, Duncan said the impact of the Child Development Center will only be magnified.

“[Faculty and staff] stay because we’re here and their kids are close to them,” Duncan said. “While they’re pouring out their hearts to the students that they have, they have the reassurance that their own children are getting the quality care that they deserve.”