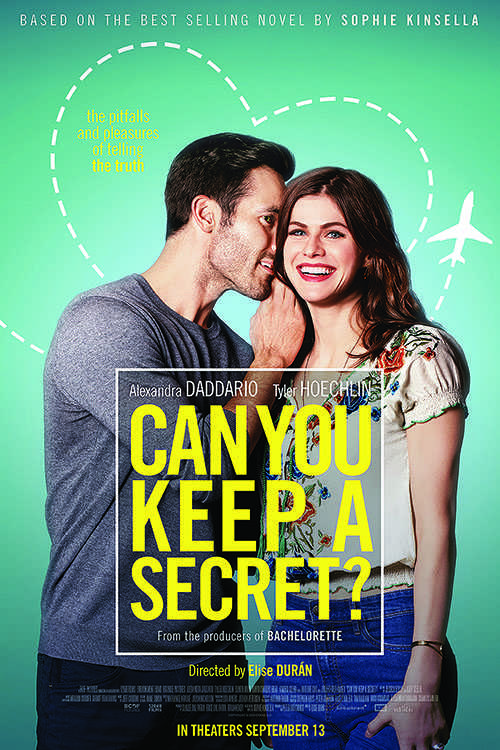 Before I even watched “Can You Keep a Secret?”, there were many red flags: one, the trailer was bad; two, there was only one movie theater in the entirety of Dallas that screened this movie, and only once a day; three, there were FOUR people in the movie theater other than me on the second opening day.

“Can You Keep a Secret?” directed by Elise Duran and with leads Alexandria Daddario as Emma and Tyler Hoechlin as Jack, is a romantic comedy adapted from a novel with the same title. The movie begins with Emma spilling all of her secrets to a stranger, Jack, on a plane with severe turbulence which she mistakenly thinks will crash. Predictably, the stranger turns out to be her new boss and a romance develops.

Although I cringed throughout the entire 95-minute movie, I will say that the shots of New York City were acceptable. One B-roll shot, with the sun setting over the concrete jungle, was especially beautiful and serene.

But, I must criticize the other 94 minutes and 45 seconds of the film. The basis of the movie—that a head of the company holds all of a certain employee’s secrets—creates an asymmetrical and unhealthy power dynamic in the office. Although Emma and Jack do agree never to expose her secrets, the latter immediately breaks this promise by indirectly alluding to her secrets in every interaction they have. Some might see his actions as flirtatious, but how would you feel if your employer referred to your deepest secrets at every possible opportunity, despite your visible discomfort?

The ridiculous plot-line dragged out the movie; if the characters had gained some common sense, the movie might have been condensed into a short film. What’s the purpose of making the main characters idiots if it only builds up frustration and screen time? The plot itself was dull already and socially incompetent characters who slowed down the story progression didn’t help.

Overall, I had a terrible experience. Masterpiece movies either invite the audience to intriguing worlds, draw attention to a social problem or do a mix of both. Films generally do not, and should not, burden the audience with secondhand embarrassment and frustration, which “Can You Keep a Secret?” did.