Open-ions About The US Open 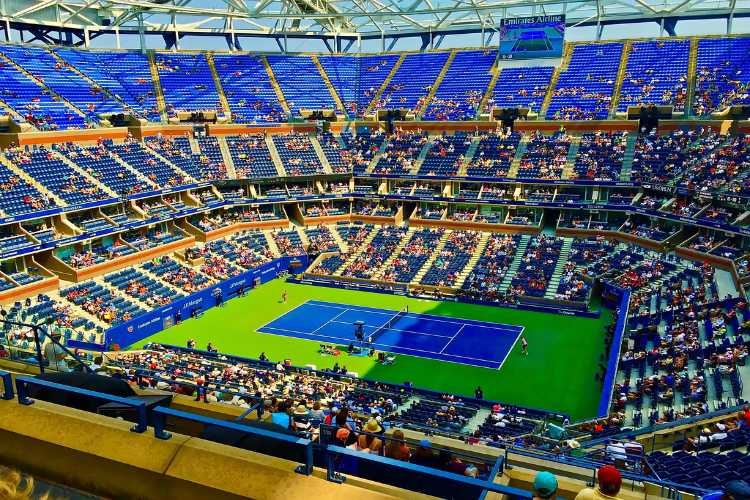 The morning light shines on the open roof court stadium as the first match of the day begins of the 2015 US Open.

The United States Open Tennis Championships, or the U.S. Open, features tennis matches with players from all over the world and is an event thousands of people follow, including students at Hockaday.

“I follow all of the Grand Slams, and this time I followed Serena Williams, Coco Gauff, and US Open Champion Bianca Andreescu’s matches,” junior Jillian Martin said. “I love seeing the up-and-coming American tennis players compete against players like Serena.”

Martin was on the varsity tennis team last year, so she said she will sometimes try to integrate a tactic or shot that she has seen on TV into her own play.

“It’s very inspiring to watch these matches; I follow the U.S. Open very extensively,” Martin said. “If I wasn’t watching it on TV, I was constantly checking the scores online.”

There is a multitude of ways to stay updated with the US Open, and sophomore Leena Mehendale stayed informed by not only watching it on TV but also reading the newspaper.

Both stayed up to date for men’s and women’s singles. During the final match of the women’s singles, Bianca Andreescu of Canada won the match over Serena Williams, achieving her first Grand Slam title.

Mehendale said she was rooting for Serena as well.

“I wish Serena Williams could have won because I think she’s a huge inspiration and role model for US girls, especially after coming back from giving birth,” Mehendale said.

On the men’s side, both Martin and Mehendale cheered for Rafael Nadal, who won the men’s singles in the Open, earning his 19th Grand Slam title.

“I think Nadal deserved to win because he is such a hardworking and gritty player on the court,” Mehendale said.

While a fair share of students are super-fans, others have had personal experiences with the U.S. Open. Sophomore Sarah Youngberg plays competitive tennis and travels around the United States for tournaments, and along the way she has met players who play in qualifying matches or in the main draw of the U.S. Open each year.

“I used to live in New York so each summer so I would go and watch the matches three to five days a year,” Youngberg said. “I love the U.S. Open; I went with my neighbors, tennis friends, dentist, and many more people.”

In the 2017 Open, Youngberg presented the men’s doubles finals trophy in the Arthur Ashe Stadium. She earned this opportunity by winning the national sportsmanship award and because of her ranking nationally.

“I was really grateful to live in New York and have an easy commute to watch amazing tennis,” Youngberg said. “I really like following the Americans and people like Roger and Rafa so I can strive to have the work ethic and attitude they have.”

This year, the qualifiers began Aug. 19 and finals ended Sept. 8.

“I’m very happy with how the American players did in the Open,” Martin said. “Coco Gauff, who is only 15, made it to the third round, which is absolutely incredible and very inspiring.”