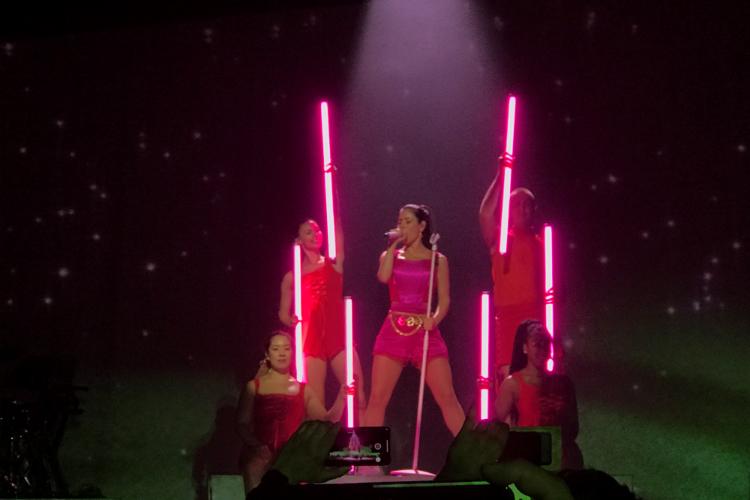 //PICTURED ABOVE: Marina Diamandis as she performs. She makes full use of lighting and stage design, keeping the focus on her and her performance while enhancing it.

The moment the screen changed to display “Love + Fear” in white lettering, the crowd began to scream. A chant started somewhere – “Ma-ri-na! Ma-ri-na!” Dancers took to the stage, their costumes bright scarlet even in the now-galaxy, dim blue lighting, and a silhouette approached the microphone. Suddenly, the backdrop disappeared, and a single white spotlight shined down on Marina as she began her opening song, “Handmade Heaven.”

On April 26  Marina released her album set “Love + Fear”, her fourth full-length release of music and the second under the name Marina. One may know her as Marina and the Diamonds, as it was under this name she released hits like “Primadonna Girl,” “How to Be a Heartbreaker,” and “Oh No!” Naturally, she went on tour as her new album dropped, and Sept. 27 she performed in Dallas.

Anticipation was high for this album and this tour, as her last album, “Froot,” was released in 2015. Fans who were waiting for her newest album jumped on the chance to see her live.

Before the main act began, a group called BROODS opened for 30 minutes. BROODS is a pop-duo founded in 2013 by siblings Georgia and Caleb Nott from New Zealand. They played a selection of their work, and while the music was vulnerable and upbeat, it soon grew a bit repetitive in sound. Their lyrics were solid, and the vocals and instrumentals were great. Overall, they were a solid opening act, but the audience was left itching in anticipation for Marina, who began 30 minutes after BROODS finished their act.

“Handmade Heaven” was a strong choice as Marina’s opening number, with its catchy melody and deep lyrics, as well as being the first song of the album. Her voice was clear and powerful, even over the fans screaming the lyrics with the music. She engaged with the audience, holding out the microphone, as dancers moved across the stage and sang back-up vocals.

She moved through various hits across her career, going from “Handmade Heaven” to “Hollywood” to “Primadonna Girl,” all in a matching hot pink top and shorts and a perfect ponytail. Throughout the performance, she varied the order of songs, making sure that there weren’t too many songs from one era at once and that her newer songs were able to take center stage when the time came. A highlight was the song “Froot,” as dancers came on with neon rods and moved in time to the song.

Another song that stood out was “Teen Idle,” a raw song delving into the pains of growing up as a teenage girl, which Marina performed on piano. The crowd sang with her, keeping up as she strayed away from the recorded version. After this, she took a costume change as dancers performed, coming back in a white skirt and top with a dog on the front.

The quality of her performances never wavered as she pushed through numbers like “Emotional Machine” (joined by BROODS’ Georgia) and “Oh No!” When she returned for the encore, she first performed “Baby” and “End of the Earth,” both from “Love + Fear.” However, her final number perfectly ended the concert, as she performed one of the most iconic songs in her discography: “How to Be a Heartbreaker.” The night ended with high spirits and energy as people flooded out of The Bomb Factory, knees and feet aching from hours of standing, throats scratched from singing along.

I was sure to buy a Marina shirt once the concert was over, still abuzz with the energy and magnitude of the concert. The concert was one of my favorites, despite the crowded space, the constant push forwards and even the difficulty seeing her at times. The bright colors of her set fit perfectly, as did the lack of extreme stunts like one could find at a P!nk concert – instead, it was open and connected.

I suppose this is why Marina chose The Bomb Factory and her set: to allow further human connection to one another as we listen to music, absorbing positive energy and the deeper messages lying underneath the lyrics.