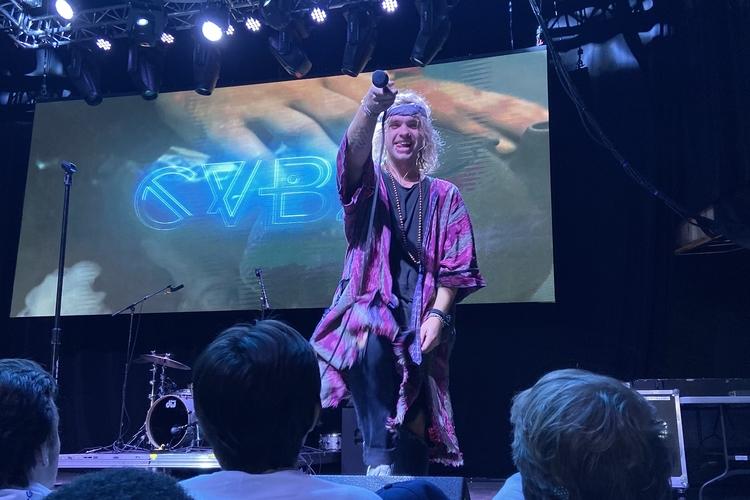 Music blared from the stage at Gas Monkey Live on Oct. 12 as students from all over Dallas attended the RevAMP Dallas concert. Sponsored by donors like Asian Mint, Ascension Coffee and OrthoTexas, the concert was a fundraising project founded by St. Mark’s seniors Eddi Raj and Charlie Rubarth.

RevAMP aimed not only to raise money for the North Texas Food Bank but also to provide a platform for young artists to gain exposure and experience performing in front of a large audience. Junior Aasha Ardila was an ambassador for RevAMP. By posting about it on social media every few days, she helped spread the word about the event.

“I thought it would be a really fun way to help the community,” Ardila said. “My brother goes to St. Mark’s, and he told me about how they were organizing this concert to help the North Texas Food Bank, so he was able to help get me involved as an ambassador.”

In addition to posting on social media, Ardila printed out and put flyers up around campus to promote the event.

“I liked telling people about it and explaining what it was because it was not something that’s really typical that people do for community service,” Ardila said. “It’s a really important thing to help our community, and the idea of having a concert for it was very unique.”

The RevAMP team hopes to sell even more tickets in the years to come.

“Although we didn’t get quite as many teens to attend as we wanted, we think the numbers will grow significantly in upcoming years,” Ardila said. “We now know what works logistically and what doesn’t.”

However, junior Isabella Lambert was impressed with how well the concert was set up this year, especially how the venue complemented the performers.

“Each one of the artists had a unique way to show their love for music and it was inspiring to see their obvious passion for what they were doing,” Lambert said.

“We wanted to perform because it was for a great cause, and we wanted to support an event run by St. Mark’s students,” said Collin Katz, a junior at St. Mark’s and guitarist for Fifth Phoenix.

Although Katz said it was challenging for the band to create a set for high school students, the members were eager to perform because they were excited about the venue’s advanced sound systems and stage, as well as meeting CVBZ.

“We got to talk to him after the show. He was a really chill and personable guy,” Katz said. “Getting to talk with him and his bandmates was definitely one of our favorite parts.”

Photography students also gained exposure through the Wabi-Sabi Project. Founded by St. Mark’s student Zubin Mehta, the project sold student photography from around the world at RevAMP. The funds raised by these sales also helped the fight against hunger by benefitting the North Texas Food Bank.

“It was an amazing experience to be a part of something that was able to raise so much money for such a good cause,” Lambert said.