After the Storm, the Show Continues 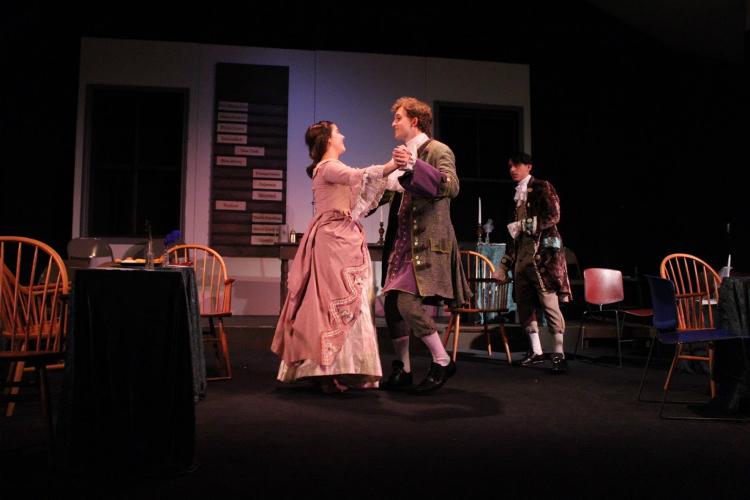 Isabella Page, a Hockaday junior, and Brett Marsh dance together on stage.
St. Mark’s senior Will Mallick and Hockaday junior Legal Segal act on the stage of the Northpark Presbyterian Church.

A cast from Hockaday and St. Mark’s performed “1776,” a Tony Award-Winning musical focused on the events surrounding the signing of the Declaration of Independence. The musical, presented Nov. 1, demonstrated the cast and crew’s talent as well as also their adaptability.

After a tornado snatched part of St. Mark’s performance center’s roof and flooded the black box on Oct. 20, the cast and crew  were forced to vacate their stage and adjust to new performance space at Northpark Presbyterian Church. Thanks to St. Mark’s Choirmaster Tinsley Silcox, who works at the church, the cast was able to relocate easily to the performance space.

The musical was junior Izzy Page’s fourth St. Mark’s production, but her first musical at the school. Despite all the plays and the difficulties that come with them, she never faced such a challenge as this.

“We were just so happy that we had a space and that the people at the church were generous enough to let us put on our show there,” Page said.

When the tornado hit, opening night was less than two weeks away. Due to flooding, the cast could not practice for three days in addition to losing much of their set. Director Marion Glorioso-Kirby, the Tony Vincent Fine Arts Department Chair for St. Mark’s, went into the black box and tried to salvage what she could of the set. With the losses, the cast had to adapt quickly.

“It was super hard to adjust because everything we had planned out spacing-wise was completely different because the stage was smaller, so we had to redo all out staging,” junior Gabe Bines said.

Another cast member, junior Leah Segal, was emotionally affected by the destruction of the black box.

“The black box to me was my home and having the black box not accessible anymore, it’s sad,” Segal said. “Seeing how that affected our teachers, Ms. Glorioso and Mr. Silkox… I saw them both cry, and that was crazy.”

Senior Chloe Johnson,  head of costumes, watched as the crew worked  to piece their set back together.

“Changing stages and losing part of the set was very chaotic, but by working together, we were able to push through and put on a great show,” Johnson said.

Ticket prices were left up to the attendees and proceeds were donated to Austin Street Homeless Shelter.