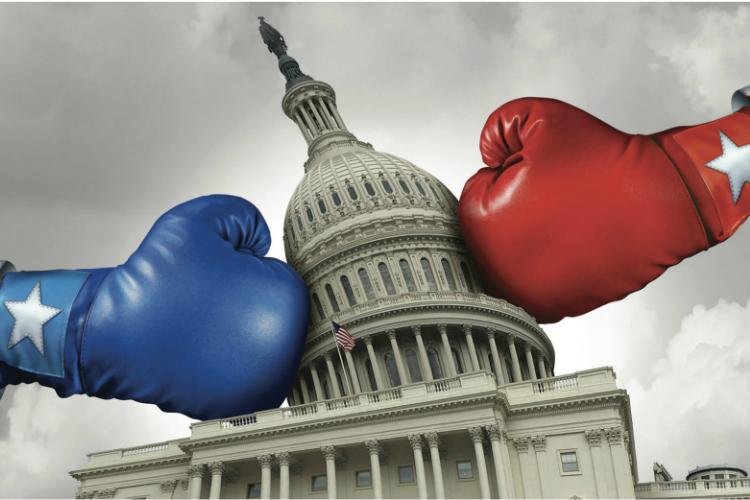 //PICTURED ABOVE: With the announcement of a formal impeachment investigation, the Democratic and Republican parties face off.

House Speaker Nancy Pelosi (D-Calif.) announced a formal impeachment inquiry into President Donald Trump on Sept. 24 that caused a divide between the political parties as well as among the U.S. population. In brief, the inquiry came as a response to a whistleblower complaint based on details of a phone call between Trump and Ukrainian President Volodymyr Zelenskiy.

Over the phone, Trump pressured Zelenskiy to have Ukraine investigate former Vice President Joe Biden and his son for corruption, the complaint alleged. This request came at a time when Ukraine was waiting for millions in military aid, leading critics to wonder if there was a ‘quid pro quo’ deal made using foreign aid as leverage.

As more information has surfaced about the call and Trump’s actions, some government officials have cited a perceived an abuse of power as the White House worked to keep the call with Ukraine’s president a secret.

Republicans and Democrats alike have responded to this polarizing situation. Upper School History Department Chair and U.S. Government teacher Kathryn Hodgkinson has viewed the impeachment inquiry as a teaching opportunity in her classes as well as an important topic of conversation within the Hockaday community.

“In past years, we have covered impeachment later in the year,” Hodgkinson said. “As students began bringing in current events about the investigations, we altered the curriculum in order to bring in the concept of impeachment earlier in the year so we could have more timely and relevant conversations.”

The impeachment inquiry is the first step in the impeachment process in which lawmakers and six key committees have begun investigating whether Trump may have committed high crimes and misdemeanors. If lawmakers decide there is enough evidence to consider writing up articles of impeachment, then the inquiries could result in an impeachment trial.

Impeachment is an often confused concept, as many people believe that impeaching a president automatically results in conviction. In reality, it is a process that can bring a president to trial over a charge of treason or another crime. This distinction is important to the timeline of Trump’s current situation.

“Trump’s policies and actions have been blatantly and unapologetically racist, sexist and homophobic for the entirety of his presidency, and I am glad that there is valid evidence that reveals Trump’s true colors,” Petrikas said.

On the other hand, junior Lauren Bailey, co-president of Hockaday’s Young Republicans Club, does not believe that Trump should be impeached. Instead, she said the impeachment inquiry is based on the Democratic party’s long-standing desire to remove Trump from office and not on any wrongdoings.

“I think it’s very possible that Trump could be impeached based on the Democratic House, but a slim chance that he will be convicted based on the Republican Senate,” Bailey said. “With that being said, I believe the impeachment inquiries are pretty gratuitous. Even Nancy Pelosi said herself that moving forward with impeachment is not a priority for America. If it is such a low probability that Trump would be convicted, Congress should shift their priorities away from something so improbable.”

With the 2020 election on the horizon, the inquiry may foreshadow a new course for both parties. On one hand, Petrikas said even by highlighting one offense, more people, especially those who were

previously on the fence, will begin supporting Democratic candidates.

“These impeachment inquiries alone have fueled the fire for the Democratic party going into the upcoming elections, especially as the party is hoping for a shift toward Democratic candidates in the general election,” Petrikas said. “Much of Trump’s presidency has been defined by mixed responses from both parties, so I think that impeachment inquiries, regardless of what happens, will influence the voters’ mindsets going into the 2020 election.”

Bailey, though, said the inquiry may end up benefiting the president.

“I think there is a good chance that this situation could lead Republicans fed up with this Democratic uproar to go to the polls in 2020 with Trump’s name on their ballot.”