After the Tornado: How Hockaday Has Handled the Devastation 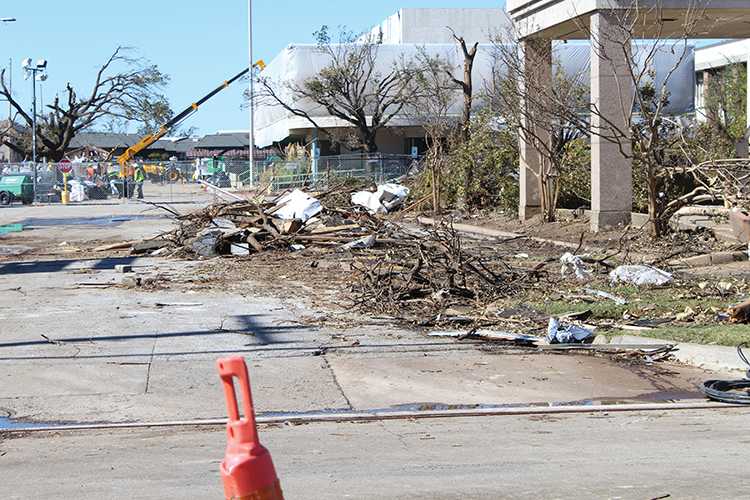 A relentless storm bulldozed North Dallas Oct. 20 on a not-so-average Sunday night. Ten tornadoes were reported to have hit Dallas-Fort Worth that night, damaging the houses of Hockaday students, the St. Mark’s School of Texas and schools in the Dallas Independent School District. Dallasites, however, did not let the destruction hold them back; they united to help their neighbors affected by the tornadoes.

Ava Franklin, Juliana Blazek, Margaret Woodberry and Riya Malhotra were among those who experienced damage to their homes that night.

With 16 broken windows, a tree through her roof, glass embedded in the carpet, dirt spread across the walls and a leaking roof, junior Riya Malhotra’s house was devastated.

“Every time I go home I feel so scared,” Malhotra said.

Shaking in her safe closet beneath her stairs, Malhotra felt the air pressure change as the tornado crashed through her home.

“I could feel my eardrums hurting and the air pressure changing,” Malhotra said. “And on top of that, I could hear glass breaking, and things were moving.”

“When we were in the hiding spot, we heard everything going on and stuff crashing through the walls,” Blazek said. “And after a couple of minutes, it was just silent.”

The tornado damaged houses, schools, trees and power lines. Whipping through Malhotra’s house in a brief 54 seconds, the tornado resulted in an estimated six months of repair.

Senior Margaret Woodberry said she was unsure about the validity of the tornado warning until objects started smacking her windows.

“We thought it was hail,” Woodberry said, “but then the front door started sucking in and out, and my mom yelled ‘tornado.’”

Unable to stay in their homes after the storm, all four families left to seek shelter. However, as they left, they were unaware of the severity of the damage. In fact, the roar of the wind and the sounds of windows breaking that sophomore Ava Franklin heard were the sounds of the tornado demolishing 70 percent of her family’s house.

“When we left in the dark, I couldn’t really see what had happened, but I saw my house on the news the next morning,” Franklin said. “I didn’t recognize it.”

Fallen trees and powerlines hang into streets as Dallas residents attempt to navigate the accident-prone traffic as a part of their commute. Traffic stands still down streets covered with stopped cars and anxious drivers. Policemen attempt to guide the oncoming traffic but struggle with the many cars attempting to examine the damage in different neighborhoods.

As a result of the tornados, residents had trouble navigating the streets and neighborhoods of Dallas. In particular, Preston Hollow and North Dallas had the most congestion due to the many streets blocked off by police or shut down because of obstacles. All roads going north and southbound through

Preston Hollow were closed in the days following the tornado, making travel through the neighborhood difficult.

For the students and teachers who get to Hockaday through these streets, the commute got increasingly difficult. Junior Emily Vargas normally has a 45-minute commute to school, which was increased by a couple of hours as a result of the tornado traffic.

Sophomore Leena Mehendale also experienced increased travel times following the storms, as many streets surrounding her house were inaccessible, causing her to have to drive in circles in order to find an open route.

“At the beginning of last week, it took me about an hour and 10 minutes to get to school in the morning, whereas it normally takes me about 10 to 15 minutes,” Mehendale said.

Some students started taking smaller neighborhood streets to get to school until Oct. 23, when Dallas created police checkpoints in certain Preston Hollow neighborhoods to keep cars out except for residents and repair people. As the week continued, the optional routes became limited as more streets and neighborhoods closed.

As roads are becoming more accessible, the traffic is lessening and commute times are decreasing again.

“The traffic has definitely gotten better,” Vargas said. “There is still some congestion the closer I get to school, but nothing like [the week following the tornado].”

Private schools in the Dallas area suffered damages to their campuses, as well as power outages.

The most damage occurred at the St. Mark’s School of Texas. The damages include the collapse of Hicks Gym, lost paneling on Winn Bell Tower, damaged tennis courts and totaled busses. St. Mark’s students were out of school for one and a half weeks, finally returning to a normal schedule on Oct. 30. However, the school still remains without gas lines to provide heat for the school.

Ursuline Academy lost power on campus and remained out of school until Oct. 28. At the Episcopal School of Dallas, the tornado caused fence and roof damage. Similar to Ursuline, a lack of power prevented students from returning to school until Oct. 25. However, with the help of students who volunteered to aid in the clean-up of the campus, the process of returning to school was sped up.

Hockaday did not experience any damage to its campus, so during this time of need Hockaday offered support both to academic and athletic programs for their neighboring schools.

Hockaday opened up their field to the St. Mark’s football and ESD field hockey teams. Additionally, Hockaday hosted the Ursuline volleyball game while the school did not have power and stored the St. Mark’s crew boats on campus.

Deb Surgi, Director of Athletics, has been focused for the past two weeks to helping any athletic needs for the Dallas private schools.

“We’re an athletic community. Helping our brother and sister schools is the right thing to do, and it’s a privilege,” Surgi said. “I’m sorry it has taken this kind of event to have everyone pull together, but it shows you what everyone in our community is really made of. While there’s a lot of tragedy and devastation, we’re also experiencing a lot of grace.”

Hockaday also has provided support for St. Mark’s seniors working on college applications, opening the 7/8 Commons to the seniors as a college counseling satellite office. St. Mark’s students were allowed to use the Upper School library for the time they could not return to their campus.

Senior Jason Yoo said he appreciated the support from Hockaday and other schools in the time of hardship at St. Marks.

“By Hockaday offering up their campus for our scholastic responsibilities, our sister-school confronted the issues as a collective, unified force,” Yoo said. “Thank you to Hockaday for the absurd amount of cookies.”

After the tornado Sunday evening, Upper School Head Lisa Culbertson and the administrative team immediately began talking about the feasibility of opening school Monday, evaluating the damage and brainstorming ways to proceed. Those who were able to traverse the roads and debris met on campus that night, and those who could not got on a call.

“We had a tornado that hit. This was a big deal,” Culbertson said. “A lot of our families were in the zone, and we couldn’t do business as usual, that was clear,”

Since the extent of the damage was unknown at the time, the administration canceled school on Monday to further discuss their next steps. Culbertson and the department chairs decided to limit schoolwork to the hours of the school day and keep the no-homework weekend in place.

Sophomore Rebecca Hoffman said the plan came as a relief. She lives near St. Mark’s and was hiding in a bathroom with her family when the storm hit.

“I feel like during the tornado what I was thinking about was my family’s safety, but also how I was going to handle the next week, and I felt very stressed,” Hoffman said. “And getting an email from Hockaday explaining that we would no longer have as many tests or any homework really alleviated that stress.”

Because the tornado struck the final week of the quarter, the department heads and Culbertson decided to change the grading system to semesters to give the students and teachers more time to meet deadlines while supporting each other.

“Everything that we’re doing for this semester, we’re looking at, ‘is this a good practice for us to keep?’ and if it is, we’ll keep that practice,” Culbertson said. “Other schools have done this already, so [we’re looking at] how other schools are handling it, and just making sure it’s in [the students’] best interest.”

Sophomore Meredith Hallam was not directly impacted by the tornado, so the no-homework week allowed her to go out and help her community with her free time.

“I went to an elementary school with other students,” Hallam said. “We played with the kids and helped the teachers clean up the classrooms because their gym was destroyed and they needed a new PE facility. And I definitely wouldn’t have had time to do that if I didn’t have a no homework week.”

How Hockaday Is Helping

Despite the scope of the devastation, the Hockaday community has found ways to help those affected by the tornados, both Hockaday families and those who attend other schools in the area.

In addition to the limits on homework and free dress for students, Hockaday has provided restaurant gift cards and take-out meals to students and employees affected by the tornado so that they do not have to worry if they have nowhere to cook. Ownby Lobby now has 15 chargers and one printer for Hockaday families who could not use theirs at home. The school also has compiled a list of families affected and checked in with each of them to help fulfill any of their needs.

Laura Day, director of the Institute for Social Impact, has led the effort for tornado relief, focusing on helping students and families at Hockaday’s partner schools in the Dallas Independent School District.

“The Institute for Social Impact website has ongoing updated-every-hour links for things that people need in the community, so people have been buying stuff,” Day said.

Different drives and relief funds, like United to Learn’s Community Relief Fund, have raised money to help families affected in DISD. Children’s coats donated to Hockaday’s Coat Drive will go to public schools to help those who lost their clothes in the storm.

In addition, Hockaday students and employees have spent time volunteering at schools, aiding at relief centers and lending affected neighbors a hand. On Oct. 23, 20 students volunteered at Loos Field House, which housed Cigarroa, Pershing and Burnet Elementary Schools while the schools were closed.

On Oct. 24 and 25, students aided teachers at Burnet Elementary by rearranging classroom space, moving boxes and playing soccer with students in gym class. Community Service Board Chair Gina Miele noted the impact Hockaday volunteers have had on relieving the pressure and stress from these educators.

“The teachers and students with which the volunteers interacted really appreciated the support the Hockaday community provided,” Miele said. “Many of the students we served loved having us at their schools, and they kept asking if we could come back the next day to play with them.”

For more information on how to help those affected by the tornado, click here.

By the Fourcast Staff