Cornerstones of Business: Alumnae share their stories of success 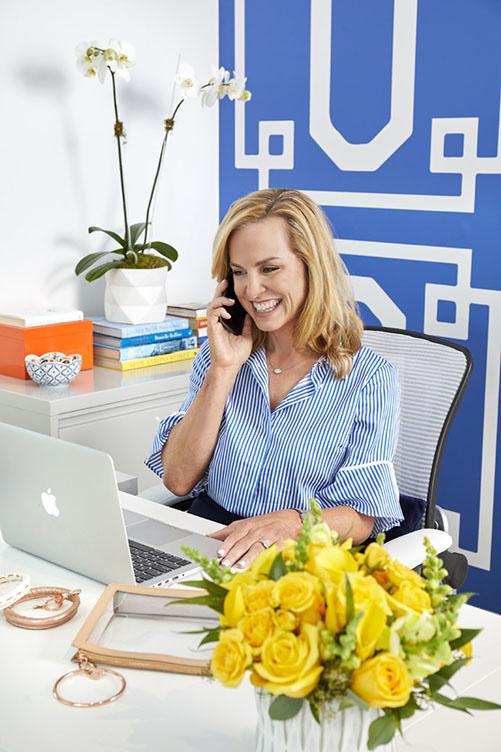 Janie Cooke works at her desk and makes phone calls at O-Venture headquarters.

The Real World – a daunting phrase Hockaday students have heard numerous times throughout their school career. The cliché haunts students as they imagine their future beyond plaid skirts. As scary as it may seem to live life without the Daisy, five alumnae share how Hockaday helped encourage and lead them to success in the real world.

In 2012, Janie Cooke ‘85 sat down with Caroline Nix, her future co- owner and co-CEO of O-Venture, and discussed how they could make women’s lives easier.

“We asked ourselves, ‘how can we fill a void in the marketplace?’ so we decided: let’s solve a problem,” Cooke said. “We knew that some of the best companies have solved a problem. We started brainstorming and making a list of problems we had, and we had both lost our keys that morning.”

From there, Cooke and her business partner decided they needed something to keep their keys from getting lost in the flood of items in their bags and counter tops.

“We thought if we could have a circle bracelet key ring that we could wear around our wrist, we could easily find them in the morning, and we would solve some of our own issues every day,” Cooke said.

Since 2012, O-Venture has expanded to other products besides the Big O Key Ring, such as wallets and phone cases. The company runs through an e-commerce store but sells its products to 4,000 small boutiques worldwide, including in Japan, Canada and Mexico.

“We didn’t think starting with a chain where you pop a product on a counter and people walk by was the right vehicle to market our product,” Cooke said. “We felt like our product was a word-of-mouth product. It was women telling other women about it.”

Cooke said this business model came from her time in the Hockaday community.

“The sisterhood of women is the culture we are trying to emulate,” Cooke said. “Our product is intended to help give women a hand, which is all in the spirit of Hockaday.”

The O-Venture Big Key Ring was featured on Oprah’s Favorite things in 2014, and Cooke and Nix hope to continue to grow the business and adjust the product to continue to simplify women’s lives.

The Sauna that Keeps on Giving

Lyle Scovell ‘97 opened a franchise of CYL Sauna Studio with her sister-in-law after hearing about it from friends in Nashville, Tenn., the franchise’s original location.

“I tried it out, and I have a really bad hip and back, and I was just absolutely astonished at how good it made me feel after one session,” Scovell said. “We started doing a lot of research about infrared technology, reading a lot of clinical research studies, and just trying to get an understanding of where it originated and its health benefits.”

CYL is an infrared sauna studio focused on an increase in blood circulation and heart rate, she said.

“Infrared light has the unique ability to penetrate human tissue and heat the body at the cellular level without causing damage,” Scovell said. “Therefore, infrared sauna gives the body a deep detoxification which Increases general health throughout.”

After learning about CYL Sauna Studio, Scovell and her business partner decided they must open one in Dallas. Scovell said her success and ambition to open the business stemmed from Hockaday.

Robyn Siegel ‘99 travels the world exploring art fairs in London, Berlin and Paris. Her work also takes her to the cultural hubs of the United States, New York and Los Angeles.

Siegel is the Co-Owner of CCS Fine Art, founded by her mother in 2002. Siegel, who has been an art advisor for the company since 2007, described herself as a consultant for individuals or companies looking to create an art collection.

“An art advisor entails that I help both individual private clients as well as companies,” Siegel said. “I identify art, build art collections or locate specific works by specific artists.”

Siegel said her time at Swiss Semester, a semester program offered through Hockaday, was a key part in developing her business.

“I went to Swiss Semester sophomore year, and I think experiencing what I was studying in class and experiencing first-hand, really left a big impression on me,” Siegel said.

This first-hand experience shines through in her work with individual art collectors.

“My favorite thing is working with individuals on their collections,” Siegel said. “Art is personal, and it’s a journey. The best way to learn more about art is to start looking.”

“Actually, when I was graduating Hockaday, I was voted most likely to throw a party, and after I graduated I did several internships throughout college to find my path,” Bullock said. “One of my internships was at a law firm doing recruiting events, and through that I found my passion.”

Bullock started the company in 2005. The company now plans 30 to 40 large-scale events each year and has been planning all of Hockaday’s events for nine years, including the Hockaday Centennial Celebration in 2013 and the annual benefit.

The company’s biggest event in terms of attendees was a Fourth of July fireworks show with 4,000 people, although Bullock also runs multi-day events with similar numbers of visitors over the days. As sole owner, Bullock controls every aspect and all the management of the company.

“My favorite part of owning my own company is getting to direct my own ship,” Bullock said. “I’ve had this company for 15 years, and it has evolved for 15 years. I am able to read the market and what’s going on in the world today, and what we should be doing to balance life and work.”

Bullock credits Hockaday with giving her skills to start the business. “I think Hockaday gave me the confidence to start a business and be an entrepreneur,” she said. “It also gave me the humility to ask for help.”

Juicing Up the World

Julianna Smith 04’ decided to purchase a Nekter Juice Bar franchise to help her children lead healthy lifestyles, as well as spread her passion to others.

“I went there because it was the only way to get my kids to eat greens and enjoy it,” Smith said. “As an endurance athlete and marathoner, I am passionate about living a healthy life and making sure my kids develop healthy habits as well.”

Nekter Juice Bar was started by Steve and Alexis Schulze in Costa Mesa, California. In 2014, Smith reached out to corporate in California and purchased a franchise with her father, Mike LaFerny, and husband, Robert Smith.

Smith and her partners were the first to introduce the business to the DFW region. They now own the Nekter Juice Bars in Preston Center, Snider Plaza, Plano (Park and Preston) and Southlake. Smith said Hockaday allowed her to seize the opportunity and become a part of the growing franchise.

“I think Hockaday teaches you that you can go out and do anything you want to do,” she said. “I saw an opportunity in the Dallas market, and I knew I could turn the store around and improve the customer service.”