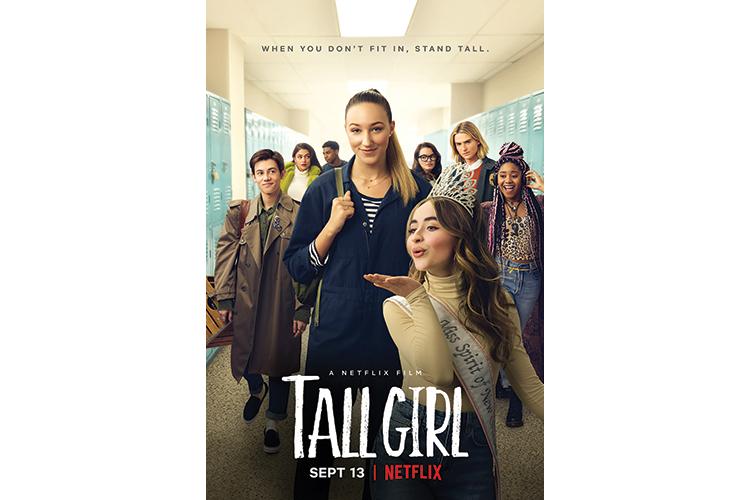 //PICTURED ABOVE: New Netflix movie “Tall Girl” attempts to inspire audience with a story about finding one’s inner beauty; although it has gained fame among teens, “Tall Girl” fails to produce a meaningful story in the eyes of Editor-in-Chief Eliana Goodman.

“Eliana, you have to watch this movie—Netflix is basically dedicating it to you.” I received at least nine variations of that text on Sept. 13 when the Netflix flick “Tall Girl” debuted. Like the film’s protagonist Jodi Kreyman—played by newcomer Ava Michelle— I am 6-feet-1-inch tall.

I have always been in the back- center-spot in class photos and have even had my bones x-rayed as a child to make sure nothing was wrong with my fast-paced growth. I felt excited to have a relatable main character and a new rom-com to watch.

I had low hopes for the film as soon as I saw the trailer. What was clearly intended to be an uplifting movie about finding your inner beauty ended up recycling a bunch of corny-romance cliche?s and executing them poorly.

To start off, the cast was an amalgamation of overused romantic comedy character tropes: the quiet and insecure Jodi; the best friend who Jodi drops once she gains popularity; the nerdy neighbor who is hopelessly in love with his best friend; the fairy-godmother sister; and the objectively-attractive-yet-boring guy.

The plot is equally unoriginal. Jodi’s issues seem mundane and her choices are predictable. As someone who has struggled with insecurities over her height, I wish this movie could have been a helpful tool for younger girls.

Alas, the movie has really only gained fame out of irony. The most famous line from the script— “ You think your life is hard? I’m a high school junior wearing size 13 Nikes. Men’s size 13 Nikes” —has become a viral meme.

In my eyes, this movie had big shoes to fill (size 13 Nikes to be exact). But with a combination of poorly designed characters, a predictable plotline and the over-dramatization of seemingly banal issues, “Tall Girl” fell short.

This movie caused me to ponder the corny Netflix original teen movies released over the past few years. In fact, I think Netflix has created its own movie genre. From “To all the Boys I’ve Loved Before,” to “The Kissing Booth,” to ‘“The Perfect Date,” to “Set it Up,” I have spent a LOT of time watching these movies.

Although I think that “The Kissing Booth” romanticizes a violent male lead and “The Perfect Date” has a somewhat demeaning premise, these movies are undeniably loved and have brought people together. I’ve heard conversations about the relatability of the characters and I’ve seen many people become fans of Yakult, a Japanese yogurt drink that is a staple in “To all the Boys I’ve Loved Before.”