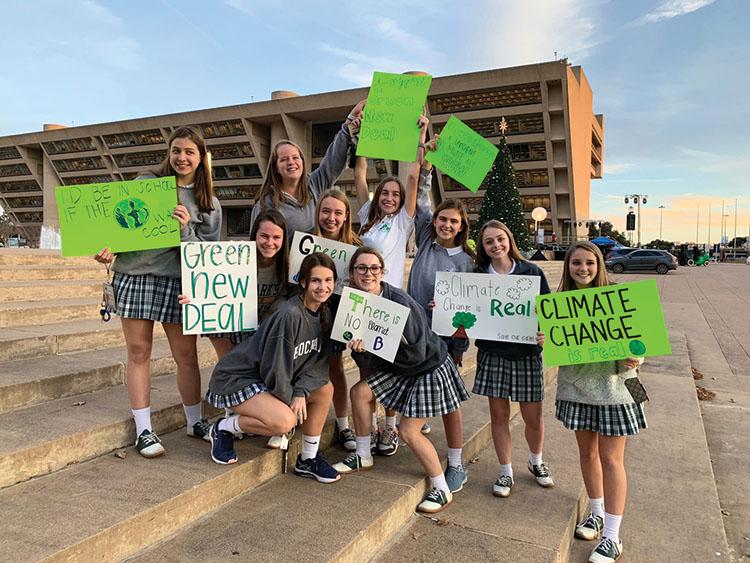 After years of completing a research paper at the end of the semester, sophomores taking the government class are transitioning from the traditional assignment to a project collaborating with the Institute for Social Impact.

Government teacher Kristen Blevins described the goal of the project as having everyone identify an issue they care about, then take action through the government to make a difference.

“It has been really great so far, because everyone has been picking different issues,” Blevins said.

Topics range from asking the city to create a sidewalk on a neighborhood street to addressing what can be done to help the homeless population in Dallas. Sophomore Victoria Hart focused on how local governments should receive more federal funds to focus on infants and toddlers.

“This is critical to our current and future workforce because there are many open jobs that could help close the poverty cycle in Dallas County,” Hart said.

To encourage change, Hart crafted a letter and sent it to CEO and President of Workforce Solutions Greater Dallas, Laurie Larrea. By sending the letter, Hart said she hopes to influence Larrea to change policies in the city or federal government.

To further educate herself on the topic, Hart interviewed Regen Fearon, mother of Sabrina and Fiona Fearon, who serves as Chair of the Board for Early Matters Dallas, an organization that focuses on improving school readiness, especially for low-income families.

Leading up to both the Thanksgiving and Holiday Breaks, students have been hard at work at completing both parts of the project. Although the social impact project requires dedication and perseverance for each student, Hart recommends this project should continue for future government classes.

“I love this project because I became very fascinated by all the information that was unknown to me before,” Hart said.

Similarly, sophomore Tukwa Ahsan enjoyed the journey of the Social Impact project. Ahsan chose to focus on ways to prevent food waste in DISD Schools. After completing her research, Ahsan shared the information with the Food and Child Nutrition Services Department at DISD and suggested a solution for the issue.

“I enjoyed the project because it allowed us to experience firsthand how we can individually have the power to recognize an issue in our community and create change,” Ahsan said.

Ahsan said that she saw some projects that hit closer to home for members of her class, while other issues were more global. She said she enjoyed seeing the different problems that people in the class chose to address, and she recommends that the project continue. She even had some words of advice for the future government classes.

“Choose a topic that you are truly passionate about in order to have a more meaningful impact on the community,” Ahsan said.

Students and teachers alike have been happy with the results the projects have produced so far, although influencing change has been challenging. Blevins described the project as a learning experience.

“The thing that I try to remind my students about is that if these problems had easy solutions, they would already be fixed,” Blevins said.

Blevins acknowledged there might be small changes made to the assignment throughout various semesters, but she is confident in the continuation of her classes’ social impact relationship.

“The hope would be that we’re actually going to see students making change in the community, and the plan is to continue on assigning it,” Blevins said.