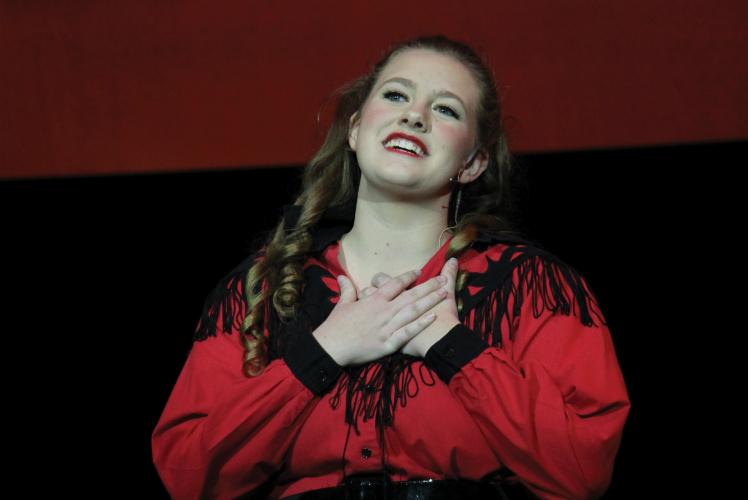 The Nasher-Haemisegger Theater echoes with applause as students and fine arts faculty take gracious bows after their performance of “Crazy for You.” Each year, students, parents and faculty gather in the theater for the much-anticipated winter musical. Here is just a glimpse of the nine-hour rehearsals, months of preparation and many moving parts that go into that two-hour show.

Every year after the spring play, the performing arts faculty meets and discusses the possible choices for the annual winter musical, beginning by reviewing the musicals that Hockaday has done in the past and thinking about the musicals they could do. Then the faculty looks at the roles there are for students, especially female roles, the type of story and which story relates to the Hockaday community. After extensive research, drama teacher and director of the winter musical Emily Gray and the other fine arts teachers decided on “Crazy For You”, a light-hearted, dance musical.

Coincidentally, Gray realized during the musical selection process that “Crazy For You” has a strong connection to some of the Hockaday students involved in the musical. Gray explains this connection between the musical and seniors Fiona and Sabrina Fearon.

“Totally a great coincidence, the original production of [“Crazy For You”] on Broadway was produced by Roger Horchow, who is the grandfather of two of our seniors this year,” Gray said. “One of his seniors has worked on crew.”

After selecting the musical, Gray designed and blocked traffic paths—what will go on and off the stage to make the script come alive. But, Gray’s job goes further than just the rehearsal room; she is also responsible for what the show looks like overall. She makes sure that all the work of the accompanist, musical director and choreographers flows cohesively.

“The director has an overview almost like a project manager,” Gray said. “In any business, a project manager has to get all the teams who are working together and pull them in the same direction.”

In addition to Gray, junior Emma Ortman helps with organization as the stage manager this year, assisting Gray in overviewing the show and taking notes on her comments to the cast. This is Ortman’s first year as head stage manager, and although her role comes with many highlights, she has also faced some challenges and developed many skills from the experience.

“[Some of the challenges encountered are] communicating with the directors and then relaying that information to the actors and being productive each rehearsal,” Ortman said. “I’ve learned how to make a lot of spreadsheets, effectively communicate information and use a loud voice.”

While Gray and Ortman communicated with the cast, seniors Emma Ross and Helena Magee, the co-heads of crew, worked with the team to design and build each piece of the set. However, their hard work began in the spring of the previous year as they focused on logistics, scheduling and recruiting freshmen. In the summer, Ross and Magee held design meetings with the design team and continued brainstorming throughout the fall.

“We really like everyone to come together and just throw out the biggest ideas they can think of, figuring things out, going through the script and looking at themes,” Magee said. “Then we start to narrow it down and meet with the directors and figure out what they want, but it’s definitely a big collaboration until we’re figuring out smaller details or structural details.”

Along with collaboration, Magee emphasized the importance of problem-solving and perseverance as a leader of crew. Not only has she dealt with making time for college interviews, but crew also needed to tackle a new type of set this year. Junior Shayle Cruz, who is on build crew, explained that they built a set that rolls away instead of one that took up the whole stage.

“Design had a [set] figured out for what they wanted to do, and then they had to change it because our director wanted to go in a different direction,” Cruz said. “So we are doing a set that rolls away, and then we can flip it around based on where the place in the musical is.”

As a result, build crew needed to create more set pieces on wheels and make sure each moving piece would be safe for the actors. While a platform set allows for more levels and planes, a movable set does not, which posed some challenges for design crew.

“We’re trying to find ways to give that depth without taking that much of the stage,” Magee said. “It’s definitely harder, and it’s a challenge, but it’s a good challenge because I haven’t dealt with this before and it’s a good learning experience.”

Throughout the year, Magee helped convert these movable designs to build, paint and light individual set pieces. In mid-January, she began sitting in on rehearsals to plan running cues for stage lights.

“I really like the creative aspect to [crew]. After a long academic day, I really like being able to go to crew at four, and paint or draw or design different things or build things,” Magee said. “It’s just a great stress-reliever, but also it’s really great working with the actors and bringing the show to life.”

Backstage, another group of Hockadaisies and St. Mark’s boys work to create custom costume bags for each character. Seniors Emily Stephens, Natasha Chuka and Chloe Johnson lead costume crew, choosing costumes and props for every character in the musical.

“I like to say that we’re Cher’s closet from ‘Clueless’; it’s a lot of picking and styling things,” Stephens said. “We do historical research to be historically accurate, and I like putting all the puzzle pieces together. Seeing everything come together, like the first day they all wear costumes on stage is so magical.”

While tech crew started preparing for the musical months in advance, costume crew began a few weeks before Thanksgiving break. They started by watching the video of the 8th-grade musical when they did “Crazy For You” a few years ago.

Then, they brainstormed costumes for the chorus, working with Gray and dance teachers Beth Wortley and Christie Sullivan ‘95 to determine if the cast will be able to dance in their costumes. The team also worked with drama teacher Susan Hubbard to pull items from the closet, order things, make alterations or rent from Rose Costumes.

“We couldn’t do any of it without Mrs. Hubbard,” Stephens said. “I’d love to know what’s going on inside her head; she is a genius.”

Stephens also said that this year was particularly challenging for costume crew because the show has a bigger cast, and each character has at least two costumes.

Each person is individually styled under the same concept and time period, but costume crew must pull and style multiple pieces that fit each character.

“Because it’s such a costume-heavy show, I was worried that ‘oh we need more people because there are so many costumes’,” Stephens said. “But it’s actually working really well that the people we have know what they’re doing. It keeps everything organized.”

In fact, Stephens, Chuka and Johnson had all been costume crew heads last year. Being part of this team inspired Stephens to consider majoring in fashion and going to art school. Although she ultimately decided not to major in it, she hopes to stay involved in theater in college.

“Costume crew has kind of become part of my personality at this point,” Stephens said. “We really do become one big family between the cast and the crew because you spend hours a day with these people, and you kind of can’t help but make friends and become closer with people you might not have met before.”

However, with all these different behind-the-scenes crews, managers and directors, the final component to every show is the cast. One of the factors behind the selection of “Crazy For You” was the dance-heavy sections to the musical and the large amount of dancers from Hockaday’s Dance Department that were interested in participating in the program. But another one of the defining factors of “Crazy For You” is the plethora of female roles for Hockaday students.

Every Hockaday musical production incorporates students from Hockaday, St. Marks and Cistercian, so many students love seeing the actors, actresses and scenes come together. Junior Leah Segal, who plays Lottie Child in the musical, loves the process of creating a musical and seeing everyone’s hard work in the final product.

“[My] favorite part is seeing it all come together,” Segal said. “We spend so long working on scattered scenes that it can be hard to imagine making a finished product, so the best part is seeing it really become a show.”

For the cast, preparing for a musical consists of three processes. They start with preparing the dance combos on the stage with Wortley and Sullivan. Then, the cast learns blocking and lines with Gray in the The Lacerte Family Black Box Theater. Finally, they practice songs and harmonies in the choir room with Abi Poe, Director of Choral Activities, and Charlsie Griffiths ’98, Director of Orchestral Music.

“Because of the day [students and faculty] went home early for the tornado warning, we missed a three-hour rehearsal which put a lot of the main roles behind on blocking and acting,” Johnson said.

One of the biggest factors that goes into the quality of the musicals is the friendship between the cast and crew members behind the scenes. But in addition to that, the musicals also teach students about work ethic and self-improvement as well.

“I’ve learned a lot from Hockaday musicals, and while they are by no means an accurate representation of professional theater, musicals here teach me patience with myself and others,” Segal said. “Also, how to trust yourself and [everyone else] to each do your individual jobs that come together to make a show.”

Kirsten Kirk, who plays lead Polly Baker, finishes performing one of her solos.
Mia Silver maneuvers a train she made for the set. Tracks were laid along the edge of the orchestra pit.
Featured dancers line up and perform for their New York follies director.
The ensemble wraps up singing “Entrance to Nevada” as the show moves west.