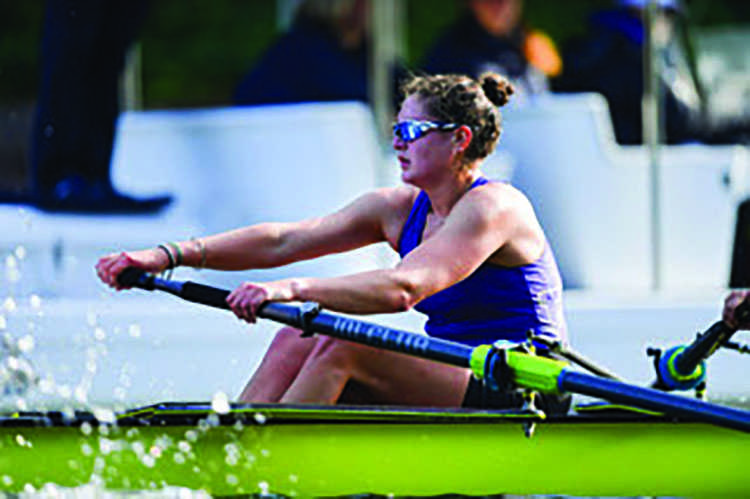 Each photo provided by the person

Each year, according to the NCAA, only 179,200 students get recruited to play Division 1 sports in college. Of those students, 33 percent quit after their first season.

Teal Cohen ‘17, Sophie Isom ‘18 and Swiler Boyd ‘19 were not among the 33 percent. In fact, despite numerous setbacks and obstacles in their first seasons, all three Hockaday alumnae persevered and excelled in their respective sports.

In 2019, the University of Washington swept the NCAA championships, set course records in all three events and became the second-ever school to complete a clean sweep in regatta history. Cohen ’17 was at the forefront of this win, rowing in the four seat of the Varsity 8+ that defeated the University of Texas by 0.6 seconds.

As she begins her third year on the University of Washington rowing team, Cohen reflected on how her team made great strides in the previous year.

“I honestly think we won because of the team culture. We always stick together through hard times and support each other while also doing what’s best for yourself,” Cohen said. “When you love the people you’re in the boat with, it just makes you go so much faster.”

Cohen committed to Washington after realizing her love for the sport and her potential as an athlete during her junior year at Hockaday.

From her experience rowing at Hockaday and her 12 years attending the school, Cohen pinpoints one ideal that Hockaday instilled in her: hard work.

“Rowing for Hockaday definitely taught me how to have a good work ethic and manage my time between school and rowing because it was hard in high school and it’s even harder now,” Cohen said.

With the experience from Hockaday crew under her belt, Cohen entered her freshman year in college, but the transition was more difficult than she expected.

“Washington Crew is so much harder and so much more demanding than Hockaday crew,” Cohen said. “I came into Wahsington my freshman year and said, ‘Oh my God.’ I didn’t even know people could be this fast. It was crazy.”

However, it didn’t take long for Cohen to get back on her feet. After securing the NCAA Championship last year, she went on to row in the U23 World Cup Championship and finished with the bronze medal.

As Cohen enters her third year on the Washington crew team, she hopes to continue the team’s success in the spring season.

On her first day of track and field practice at Hockaday, a young Isom lined up to participate in a warm-up lap with her team. Subconsciously, she clenched her fist and began to run. Less than a second later, LaBoris Bean informed her of her incorrect running form and told her to spread out her fingers. Bean, who was the varsity track and field coach at the time, is now the Coordinator of Athletic Operations as well as head coach.

Before her first track season freshman year, Isom had never attended a track meet, did not know the correct running form and didn’t even consider track her main sport, yet by her senior year she committed to run track and field at Yale University.

Around the middle of her junior year, Isom decided to pursue a college career in track when a back injury prevented her from playing volleyball. She then began her search for the school that fit her and after much consideration, she decided on Yale.

Isom attributed her success in track to Hockaday and her experiences at the school.

“If I didn’t run track at Hockaday I wouldn’t be running track here,” she said. “My whole entire Hockaday experience prepared me for this in every way. I really didn’t know how to do anything before Hockaday track.”

Isom’s first season at Yale presented her with many challenges. She pointed out that some of the obstacles arose due to being so far from home, yet others stemmed from her first experience running track in college.

“Running at Yale was very different than running at Hockaday; the structure of the practices were a lot different and I really didn’t trust it because it was a different style of running than I had gotten so far,” Isom said. “I didn’t embrace it and I definitely should have because it would have given me a lot more successful freshman season.”

However, Isom said she appreciated her struggles and the runner they have forced her to become.

“Honestly, I’m grateful that my first year didn’t go exactly as I wanted it to because it taught me exactly what I need to do this year,” she said.

“We’ve only had one meet but it’s already so much better and I feel like I’m back to who I was when I was at Hockaday.”

As she enters her second season at Yale, Isom said she will focus on sprinting longer distances in practice and on her relationship with her coach.

“Trusting the process and my coach, which I didn’t do last year, but now I do, I think will really help my running,” Isom said. “We also have a lot better communication than last year and that I think is helping a lot, too.”

In 2014, the 7th grade soccer team did not have a goalie. Swiler Boyd, who had never played soccer goalie, volunteered to fill the spot. Flash forward five years, and Boyd now plays soccer for Acadia University in Nova Scotia, Canada.

Boyd played for Hockaday her freshman year, took a break to play club her sophomore and junior year and returned to the Hockaday team her senior year.

“Hockaday is actually where I first started playing soccer and it’s what introduced me to soccer. When I came back for my senior year, everything kind of just came full circle,” Boyd said.

This year, Acadia, part of the Atlantic University Sports Conference, won the AUS conference, but lost in the AUS championship weekend. However, they earned a place at Nationals in Victoria, British Columbia and finished fourth.

Even though the team had a successful season, Boyd’s first year did not go exactly as planned. During preseason, Boyd suffered a quad strain injury.

Now, Boyd has made a full recovery and is playing in the winter indoor league.

“I’ve gotten my time in the offseason, just preparing because I have the mindset going forward that I need to be ready to play for the next three or four years,” she said.

Boyd said she has been able to put in extra hours of practice to prepare for the coming years due to the time management skills she developed at Hockaday.

“The work ethic at Hockaday did prepare us pretty well,” she said. “Being able to make time for the extra hour or two I can go and improve outside of what the team is doing is key and that tends to set the players apart from each other.”