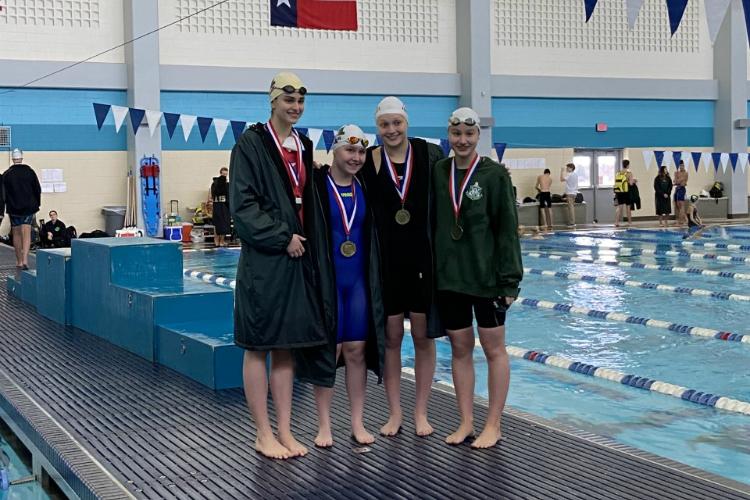 Varsity Soccer team, scoring 32 goals total and only two in the back of their own net in the entire Southwest Preparatory Conference season, crushed the competition, becoming the 2020 SPC champions on Feb. 15.

They entered SPC as the No. 1 team in the North after defeating the Episcopal School of Dallas (ESD) on Feb. 7.

Hockaday faced St. John’s in the championship game, with the score halted at 0-0 at half time. Twenty minutes into the second half, sophomore Remy Finn scored a goal after Leena Mehendale’s corner kick.

Junior Captain Graydon Paul described the intensity throughout the game.

“Every single person stepped up that game,” Paul said.

After losing in the championship game last year, the team was ready to fight this season.

“I was so overwhelmed,” Paul said. “Last year, we were left with a bitter taste in our mouth, but this year we were mentally more ready. When that first goal went in, we knew we were on top.”

Hockaday hosted the girls’ tournament. Before the championship game, the Hockaday Athletic Board hosted a tailgate to encourage sports fans to come and watch their home team win the trophy.

The fans on the sidelines empowered sophomore Jules Johnson as she defended and protected the meadow.

“We had a lot of support and I think that really helped us to win,” Johnson said. “The fans helped us push through our pain and encouraged us to win for our community.”

“I cannot even describe how bad I wanted that,” Tchoukaleff said.

“This is the best team I’ve ever been a part of,” Martin said.

Finally, freshman SuSu Campbell earned a personal record in the 100-yard backstroke with a time of 1:07.94.

Leading up to SPC, the team focused on team unity,  which helped them with Thursday’s meet, senior Captain Annette Im said.

“The team was bigger this year than previous years,” Im said, “and I think we did a great job in trying to bond as a team.”

The team worked together to earn points in individuals and relays to add up to 106 points.

Diving competed in the SPC meet on Thursday, Feb. 13 at the LISD pool in Lewisville. Freshman Emily Loftus and sophomores Elise Little, Fiona Chen and Lara Carocciolo performed 11 dives for the judges. They earned seven points in total which added onto the swimming and diving team’s points. With their help, Swimming and Diving won second place in SPC.

All four divers are new to the team this year and had only competed in one meet before SPC.

Little explained that her hardest dives were the front double flip and the reverse dive.

“It was a very nerve-racking experience but also very fun,” Little said.

To prepare for the meet, all of the SPC divers learned 11+ dives from five different categories: front, back, reverse, inward and twist.

“They’ve made huge strides since the beginning of the season and I am so proud of them all,” Junior captain Kaitlin Kelly said.

Basketball slipped into SPC after a win against ESD on Feb. 7. They entered the tournament as a sixth seed team in the North and ended up getting 10th place.

Although they did not come out on top, the team won one of their games.

“I can say that this was a transformative year for the basketball program,” Junior Captain Claire Tate said,  “and I am excited to see where it goes from here.”