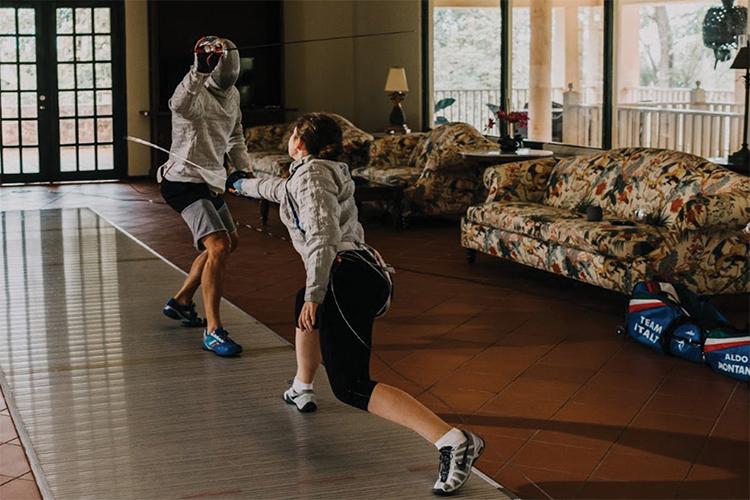 Sabre gripped tightly in her hand, Diana Piovanetti tunes out loud cheers circulating through the gym and directs her focus to the opponent standing high in front of her. Laser focus is a key component to her sport; one second off focus and her opponent could strike her.

Piovanetti runs triumphantly off the platform—coaches, parents and teammates embrace her with warm hugs and applaud her improvement as a fencer. With just three years of practicing, Piovanetti became number 72 in the world in the Cadet category, the No. 1 fencer in her division and made history by ranking her team as number eight in the Pan-American Games, a record for the female sabre Puerto Rican team.

“I am so proud of this accomplishment and so thankful to my coaches, family and Hockaday professors for supporting me through this last season,” Piovanetti said.

Piovanetti, representing her country as she competes for the Puerto Rican National fencing team, marked her second competitive season and her third of year fencing during the 2018-2019 school year. She began her fencing journey in Puerto Rico under the training of Coach Rafael Omar Nieves and uses the sabre weapon, a device that requires aggressive motions and fast decision making.

Piovanetti fought to make the Puerto Rican National Team because of her passion for the sport, the opportunities the team would open up and the opportunity to represent her home.

“I think the camaraderie and competitive spirit is a very hard feeling to explain,” Piovanetti said. “It is just wonderful to be able to represent a country.”

To make the Puerto Rican National team, Piovanetti qualified for the Cadet (under 17 years old) and Junior (under 20 years old) categories by placing in the top three at four national qualifiers.  She became a member in March of 2017.

The following year, Piovanetti won the position of Junior Sabre Team Captain. She had the opportunity to represent her team in Costa Rica, Colombia and Poland.

Piovanetti said she works hard to juggle Hockaday’s rigorous academic schedule while spending an average of 10 hours a week training to maintain her fencing skills.

“It is not easy at all to excel academically and compete at the highest of international levels,” Piovanetti said.

Training constantly to match the level of her opponents and teammates, who have been training for at least five years, Piovanetti says her enthusiasm and passion for fencing have helped carry her to success.

“I am a very competitive person,” Piovanetti said. “I have always taken sports seriously. I think my best skill at fencing is my ability to make smart and quick decisions.”

Although Hockaday fencing Coach Hector Maisonet hasn’t had the opportunity to directly train with Diana, he has followed her success in the sport.

“I have seen how she develops new skills in each competition,” Maisonet said. “Diana’s skills are good and very advanced… This girl can give Puerto Rico extraordinary international results.”

Victoria Li, a freshman who shares a passion for fencing with Piovanetti, has studied her techniques and looks up to her work ethic.

“Diana is strong, fast and has good tactics,” Li said.

Piovanetti said she is looking forward to this year’s season, which started Sept. 14, and competing in select events of the European Cadet Circuit. Events will be held in Konin, Poland; London; Eislingen, Germany; Moedling, Austria; and Meylan, France.  If she qualifies to represent team Puerto Rico in competition again this year, she will compete in San Salvador at the Pan-American Championship and the World Cup in Salt Lake City, Utah.

“Diana will be the one who will give Puerto Rico the glory in fencing,” Coach Maisonet said. “You are the will of fire from your country, and I believe in you.”