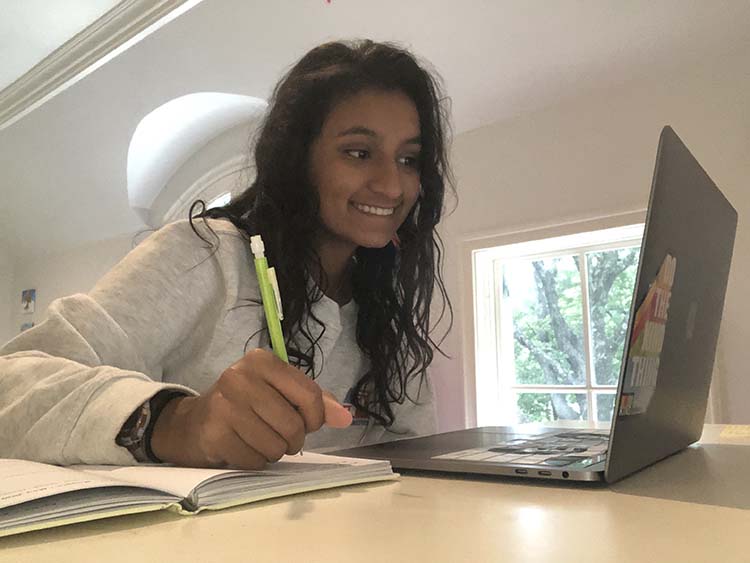 //PICTURED ABOVE: Raj and Sanchez both rely on computers to complete their daily tasks: homework, grading and recording and listening to lessons.

Since distance learning has begun, sophomore Mina Raj said, practically her entire life has moved onto her computer and phone screens.

“The extra time I am spending behind screens on zoom meetings and facetimes is definitely hurting my eyes and impacting my health,” Raj said.

“I am spending at least four to five more hours staring at my computer than I do during a normal day,” Sanchez said. “I believe it is impacting my well being.”

With the rise of stay-at-home orders, schools around the country have replaced face-to-face connections in the classroom with online learning methods. These virtual formats drive education to continue despite setbacks, but this major increase in daily screen time leads to serious questions about the health effects of bluelight technology.

According to Harvard Heath Publishing, getting enough light is important because of vitamin D’s role in bone health. Sunlight increases the body’s intestinal absorption of calcium, but not all forms of light are beneficial for our bodies.

Wexner Medical Center mentions blue light, a form of light coming primarily from the sun that can be harmful to our health. “Blue light is closest to invisible, ultraviolet light on the color spectrum, which is known to be very dangerous.” Additionally, Wexner Medical center says Ultraviolet light from the sun can burn your eyes in the cornea and lead to eye diseases such as snow blindness.

“The main problem caused by blue light from our cell phones or computers is its interference with our body’s production of a hormone called melatonin,” Hattan said. “Melatonin helps with normal sleep patterns, so the decreased production of melatonin will interrupt the body’s circadian rhythm.”

Circadian rhythm, as described by Mental Health America, is “a cellular process that synchronizes certain behavioral and biological processes.” This progression can be easily disrupted, and light is one of the strongest environmental influencers of circadian rhythm.

“Exposing the body to blue light from electronics during nighttime hours can disrupt circadian rhythm, commonly leading to a lower quantity and quality of sleep,” Hattan said.

He recommends eliminating time behind a screen one to two hours before going to bed, but says that this is very difficult for the average person to do today when everything revolves around the use of computers.

Prevent Blindness Organization says that another common effect of long-term computer and phone use is eye strain. Eye strain can occur from increased cell phone and computer use because of the focus a person must keep on the screen over long periods of time.

Although eye strain has a tendency to make eyes feel uncomfortable and dry, its effects are not long lasting, and over-the-counter products such as artificial tears can be used to help relieve it.

In addition, scientists have researched possible long-term effects blue light on smartphones may have specifically on our eyes, such as macular degeneration and cataracts, but Hattan says there is no strong evidence to support these claims.

“There is no real long-term threat to vision from the blue light emitted from cell phones and computers other than the interruption of melatonin production and effects on the body’s circadian rhythm,” Hattan stated.

Even though no studies have proven blue light from screens can damage our eyes, eyewear companies now sell blue light filtering glasses, marketing them with claims that they prevent blurry vision and overall protect your eyes.

Hattan says these blue light computer glasses are helpful in reducing eye strain and fatigue, but he does not support their claims of benefit in blue light blocking.

With distance learning also comes additional hours behind computer and smartphone screens. This added time behind screens can cause speculation to buy blue light filters and glasses. However, Hattan does not agree.

“There really is no evidence that blue light filtering provides any real benefit, and it’s helpfulness is controversial,” Hattan said. “I would say if a person is ordering a pair of blue light filter glasses, there will be little to no benefit.”