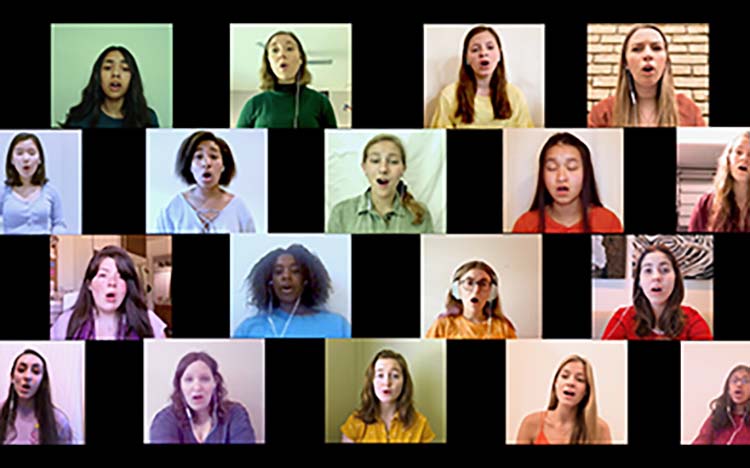 //PICTURED ABOVE: Members of the Upper School choir sing Sara Bareilles’ “Kaleidoscope Heart” by sending in videos of themselves for Upper School Choir Director Abi Poe to edit together.

The Hockaday choir has adapted to change all year long, from having their director go into labor the day of their winter concert, to having to adjust the format of their spring concert due to COVID-19. Despite these setbacks, for their spring concert, the choir girls have put together individual recordings that will be combined to create the sound of a full choir which will be posted on the school website for the Hockaday community to enjoy.

The choir members have been practicing the three featured songs in the concert, “O Love” by Elaine Hagenberg, “Kaleidoscope Heart” by Sara Bareilles and “Take Me Home” by Pentatonix, prior to the quarantine period.

In order to brush up on them, the girls participated in Zoom rehearsals for each song. In these sectionals, all the girls are muted except for the Upper School Choir Director, Abi Poe, who plays the accompanying part, and the girls sing on their own end of the camera.

“Obviously I can’t hear them and they can’t hear each other, but they can all hear me and sing along, and if they have any discrepancies with what they’re singing compared to what I’m singing, they raise their hands and we go back over those sections,” Poe said. “I host more Zoom sectionals if they have things they want to go over.”

The girls will then record themselves and send in the videos to Poe, who will edit them together. In order to get the videos synced up, Poe sent a video, prior to the recordings, of her conducting or an audio track of her singing. Then, at the beginning of their recordings the girls counted down with her. This was to ensure everyone was singing at the same tempo and coordinating the breaks in the music as if they were all singing in the same room.

“It challenges the girls to present the story of what they’re singing with their faces because they are so up close and personal,” Poe said. “From a creative vantage, it allowed us to play with how we presented and we were able to put some cool film effects into the video that really enhanced their singing.”

Through the process of recording the spring concert, the girls have had to practice singing on their own instead of in a group with their specific voice groups. Sophomore Cristiana Miele said although she was able to take as many tries as she wanted, the task was difficult because she couldn’t hear the people around her.

“You can’t align yourself with other people in the choir; normally we’d listen to the people around us and use that as a base for how loud and soft we had to be, or how fast you should be going,” Miele said.

“Singing at the exact consonants at the same time and ending at the same time and blending well enough knowing when you should be louder, softer, or whatever, is so important to singing together,” Kirk said. “Although I think we’re all adjusting pretty well, it’s really hard knowing we worked so hard to learn over 10 songs, and we learned them pretty well, and it feels a little like it was for nothing.”

Focusing on the positives of practicing virtually, Poe said it has forced the girls to be independent.

“From a pedagogical side of things, it really forces the girls to be completely independent on their own part,” Poe said. “Our goal is to get each person independent enough on their part that if everyone else in their section was gone they’d still feel comfortable singing it, which is a hard thing to do. It really gives them a challenge to rise to a level of professionalism and musicianship.”

Since each singer has to know her part on an individual basis, Kirk noted it may be beneficial for each girl’s confidence.

“I think some people that might sing quieter in choir because they’re unsure about themselves might build up their confidence because no one else can hear them, so they might start singing louder and being more confident in themselves with the notes,” Kirk said.

The concert videos will also feature Mona Rejino, the staff piano accompanist, and freshman Liya Chen, a cellist in the Upper School Orchestra.

“It is cool to see them all up on the screen at the end of it, and even though they are all singing alone in their rooms when they’re recording it, it really feels like they’re all together in these videos,” Poe said. “I’m very proud of them as they’ve really risen to the challenge and made it a really special presentation.”