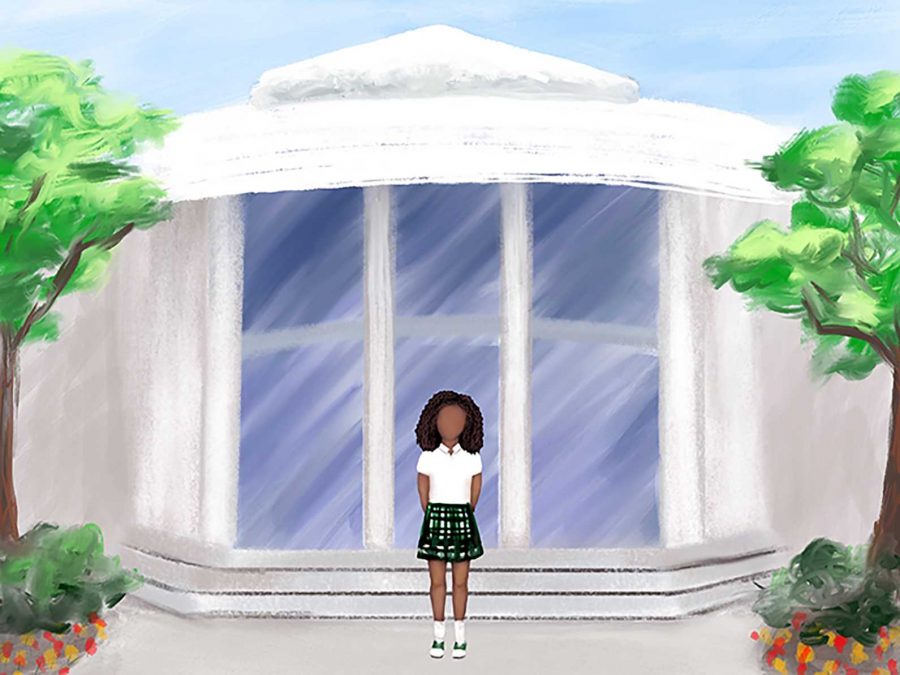 //PICTURED ABOVE: Jillian Martin, rising senior and co-president of the Black Student Union, speaks on being Black at Hockaday.

I walk into school with my hair freshly straightened. “Jillian, your hair looks so pretty when it’s straight!” “I love your straight hair Jillian!” “I like your straight hair better than your curly hair.” Now, these comments might seem small, and not much harm could be done, right? Wrong. These comments, indicating straightened hair is better than my natural hair, are microaggressions.

The word “micro” is specifically used because the comments are so normalized they are not considered true aggression. Some other microaggressions I have heard at Hockaday are along the lines of, “Why don’t we have a white history month?”; “It’s okay for me to say the n-word if it’s in a song”; “I don’t see color”; and “She only got in there because she’s Black.”

Microaggressions happen in the classroom too, when the teacher brings up slavery or mentions a Black character in a book, and everyone turns to, likely, the only Black girl in the room. Once again, one might think actions like these are trivial, or we are “too sensitive.” At schools like Hockaday, Black students are already singled out by being a very small percentage of the student body. When every student turns to look at the one Black student, that student is singled out even more.

You might be asking: What can I do? What can Hockaday do? In our country’s current climate, it is more important than ever for ALL students to educate themselves on the issues Black people have been fighting for, for the past 400 years. To start, I am sure most of you have seen the wealth of information on systemic racism in the United States on all of our social media: Instagram, Twitter, Tik-Tok, etc. (I recommend @soyouwanttotalkabout on Instagram). Educating yourselves and becoming more aware about these issues will help you to understand a part of what Black people endure every day.

As for Hockaday, I personally believe it starts with a more inclusive curriculum. For example, there is so much Black history we have not learned. There are two important questions that need to be asked regarding Black history: why don’t we learn about African history in our world history classes? Within these world history classes, why is it that when we do learn about Black people, they are often demonized and rarely praised? In addition to history, the English curriculum would benefit from the many books written by Black authors. From what I have experienced at Hockaday, I have only read two full-length books by Black authors. I’m hopeful the school is on the right path to being more inclusive to people who look like me.

Racism cannot be ignored. It is built into every single aspect of society: the healthcare system, schools, the government; it is endless. We’re asking you to acknowledge the unfair treatment of Black people in this country and take the necessary steps for change. This is not a political issue. It’s a human rights issue.